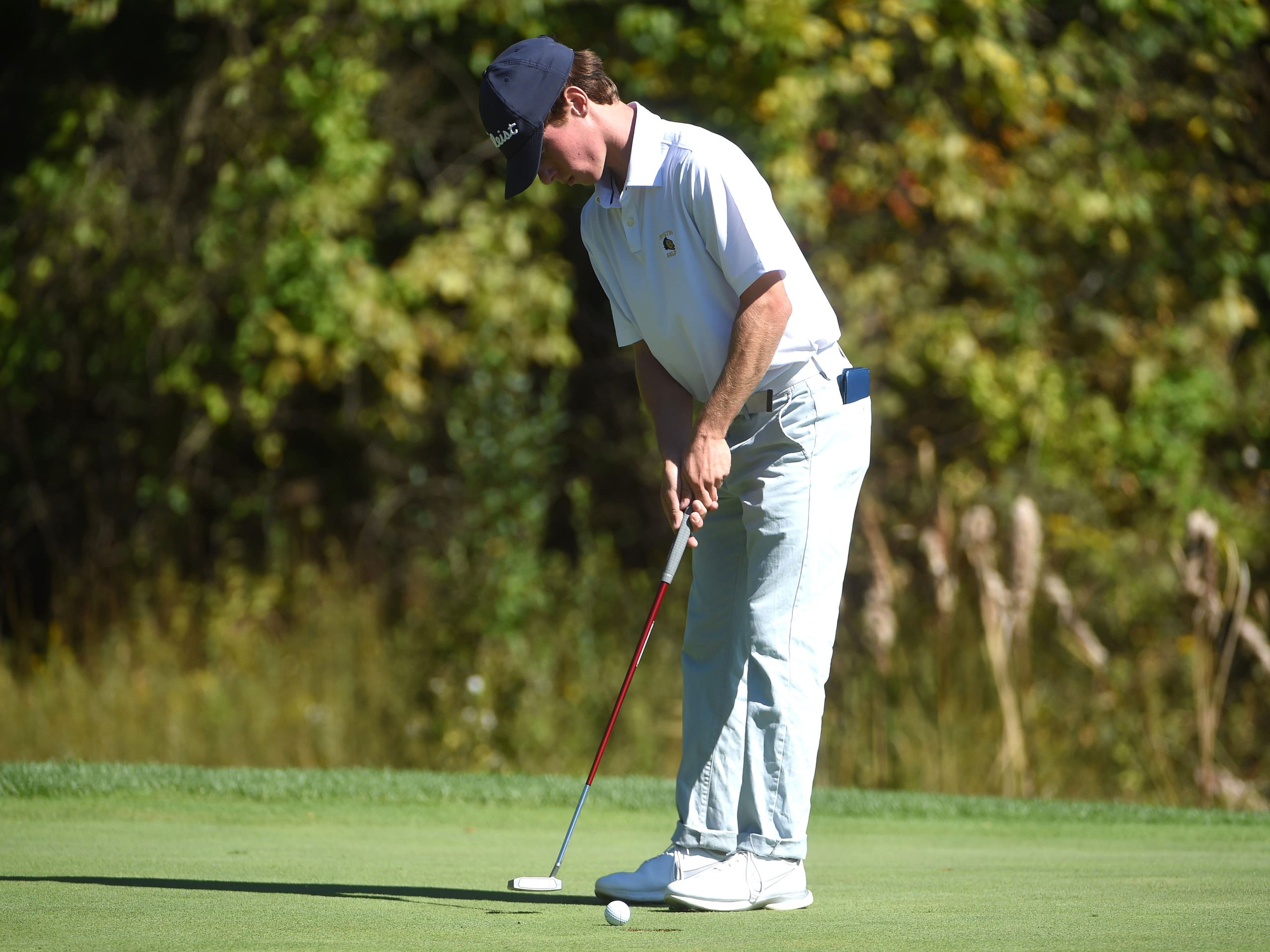 The Downingtown West junior, fresh off a quarterfinal berth in the U.S. Amateur, is one of the top non-professionals in the world. But West Chester Rustin sophomore Sam Feeney carded the only sub-par score of the 86-player field to nip Gross by a couple strokes. It all happened on Tuesday at Applecross Country Club.

“It was a special round,” said Rustin head coach Joe Paris. “Sam aspires to be like Nick Gross. Sam knows him personally and he wants to be in that category, and with the way he is playing, I think maybe someday he can get there.”

The battle for the individual boys’ crown took precedent because much of the team intrigue has either yet to be decided, or already concluded. But there was another surprise when Kennett took first place as a team on Tuesday.

“The guys just balled out today. We had four in the top-eight come from mushroom country – from little ole Kennett,” quipped Blue Demons’ head coach Kevin Murphy. “We had 15 kids come out (for the team) compared to 35-40 for other teams. It is very exciting.”

Kennett finished third in the C-M American, but still bettered Rustin by two strokes, Downingtown West by four and Unionville by eight on Tuesday. Because of the regular season record, the Demons could not qualify as a team for districts, but the squad will send Grant Urie, Drew Zieg, Kasim Naringesingh-Smith and Griffin Gaughan to districts as individuals, along with Lily Kochersperger on the girls’ side.

“We were very close to a magical season,” Murphy said. “There was a lot of woulda, coulda, shoulda in terms of how much team glory we could have had, but the results here were very impressive.”

With a lot of help from Feeney, the Golden Knights sewed up the Ches-Mont American division title last week. But on the National side, three teams are still in the running: Downingtown West, West Chester Henderson and Downingtown East. And the Whippets and Warriors still have two dual meets to play.

“I actually had no idea we had already sewed up the (C-M American) team thing,” acknowledged the 15-year-old Feeney. “I was playing to also help the team. Even though it was extra motivation because I thought I was playing for the team as well as myself, I don’t think it made much difference.”

Unionville’s Mary Dunigan captured medalist honors in the girls’ competition, edging out Downingtown East’s Silvana Gonzalez by a single stroke. A senior, Dunigan entered the day with a third and a second at previous Ches-Mont’s. And even though her 4-over-par 76 wasn’t flawless, it was enough.

“I can’t be disappointed with the win, but I am generally disappointed in the way I played,” Dunigan said. “My goal this season is to win states and that round wasn’t at that level.”

“This was definitely up there,” Feeney said, when asked where the round ranked in his career.

His biggest regret was a 3-putt for bogey at the par-4 5th.

“My goal, when I play any tournament, is always to win,” he said. “I know I am capable of going under-par because I’ve done it in tournament rounds.

“Everybody has good and bad days in this crazy game. I don’t know Nick (Gross’) round went. He is clearly a tremendous player – a once in a generation talent. So this definitely builds a lot of confidence. I am very pleased with how I played, but I could have gone even lower.”

To the surprise of nobody, Gross got off to a hot start and was 3-under-par thru seven holes. But a bogey and No. 8 and another at No. 9 followed.

“On the back nine it was like I would make a birdie and follow it up with a bogey,” he said. “I made six bogeys today and that just can’t happen.”

A total of 23 players qualified for the District 1 Tournament, to take place on Oct. 10-11 at Turtle Creek. There was a seven-way playoff to determine which four would advance after shooting 81. It was 11 strokes off the pace, set by Feeney.

“Sam is the type of player where I don’t have to motivate,” Paris said. “He is extremely tough on himself and is one of the hardest working players out here. To play as well as he did, in this field, is huge.”

The National division champion will be decided when Downingtown West and Henderson collide on Sept. 28 at Downingtown Country Club, and on Sept. 29 at Radley Run. If either is able to sweep, that team will win the title. If there is a split, Downingtown East enters the picture and a series of tiebreakers will be applied to determine the champ.

“We’ll see what happens,” Gross said. “But the number one goal today was for everybody to make every shot matter, focus on the next shot and don’t give up.”

Dunigan got off to a nice start with two early birdies, but then suffered through a 3-over 8 on the par-5 9th that ended with a 5-putt.

“It was a very hard pin placement on top of a ridge,” she explained. “I don’t think I’ve ever had a 5-putt before, so that was tough. I got very frustrated, but I had to let it go and move on.”

And she did. On the very next hole, Dunigan savaged a par with an 8-foot save and then went on to play the final 9 holes at 1-over.

“I played solid, but my putting was lacking,” she said.

“I know her head was spinning and she was frustrated with the greens,” added Unionville head coach Joe Sudimak. “A key putt for her was on 10. She was in a really difficult position on the fringe of the green. Her first putt was about eight feet short, and she drained that to save par. That kick started the back nine for Mary.

“The sign of a very good golfer is when they struggle with a particular part of their game but still find a way to win. That was Mary with putting.”

Gonzalez (77) and Mia Pace (83) came in second and third place, respectively, for Downingtown East. Rustin’s Sophia DeSantis (85) was fourth, and Unionville freshman Reagan Wilson was fifth with an 88.

“(Reagan) has a ton of potential,” Sudimak said. “Nobody in this field works harder than she does. To break 90 in this field is a big step for her.”

The top 16 girls on Tuesday qualify for the District 1 Tournament, to be held Oct. 10-11 at Raven’s Claw. There was, however, no team competition on the girls’ side. Unionville had already won the team crown, with Downingtown East grabbing the runner-up spot.