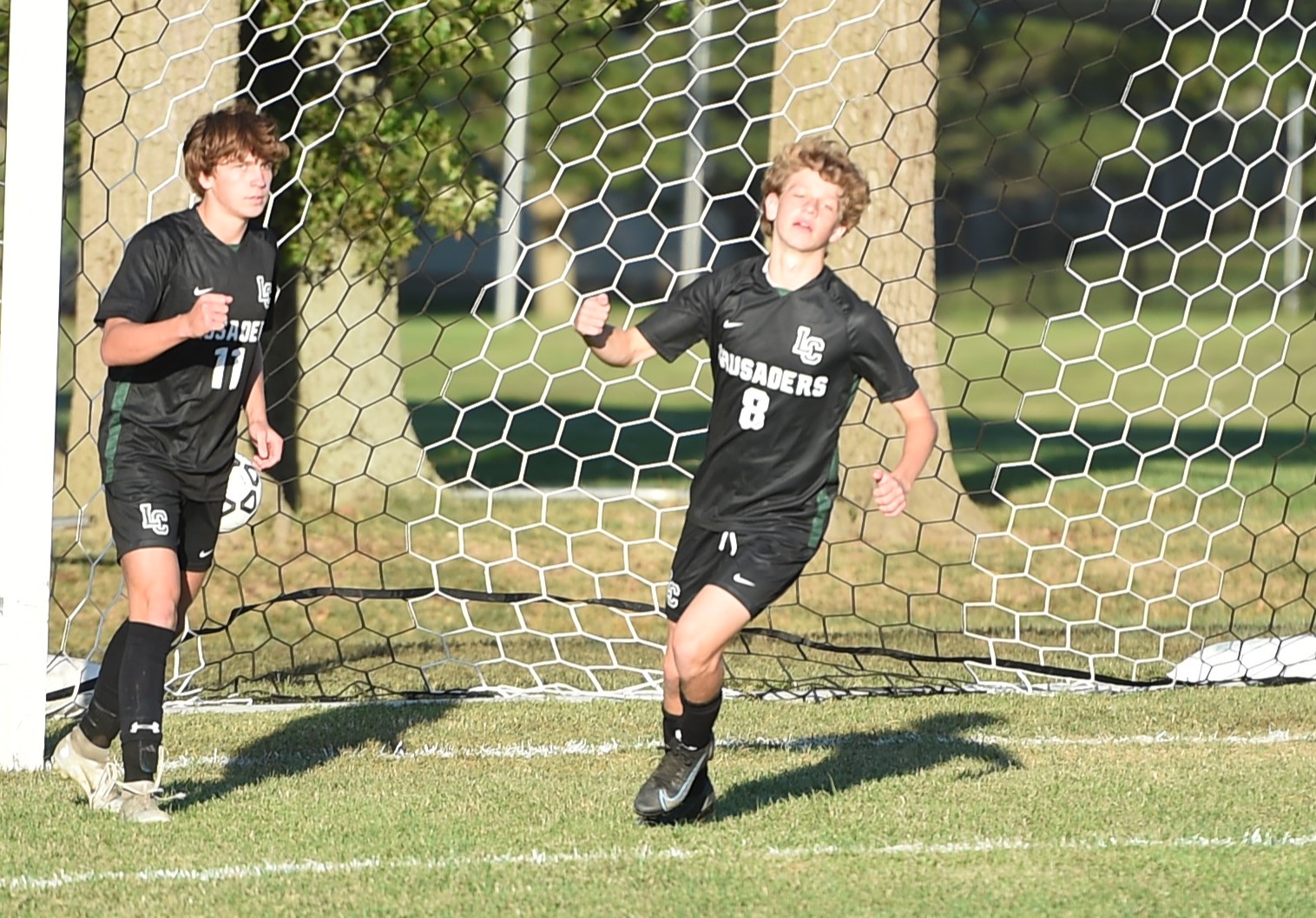 LANSDALE >> As the scoring opportunities for both the Lansdale Catholic and Pope John Paul II boys soccer teams continued to come up empty, Matthew Schaefer knew he and the host Crusaders could not let their irritation overwhelm them.

“When you see you’re getting a lot of chances and you can’t score, you start to get frustrated and guys start to yell at each other,” Schaefer said. “But you just got to pick each other up and remember that you’re all playing together and you’re all trying to get the win. So you just got to take it for what it is.”

Monday afternoon’s nonleague matchup ended with neither side scoring after 80 minutes of regulation.

However, early in overtime, Schaefer got a pair of chances in front of the goal – the first blocked by a defender but the second off a pass from Chase Anderson the junior put into the back of an open net for a 1-0 LC victory on the Crusaders’ Senior Day.

“We kept just trying to tell them, ‘Hey listen, the way you’re going to beat this team is by trying to get around their backline – not through them, but around them or over the top of them or whatever.’” Lansdale Catholic coach Casey Farrell said. “And I took us ‘til the first overtime, like you said, 90 seconds in to finally put that into place. And of course, as soon as they do it ends up in the back of the net.” Pope John Paul II’s Ian Goetz (19) heads a ball in traffic in front of the net after a Lansdale Catholic corner kick during their game on Monday, Sept. 26, 2022. (Mike Cabrey/MediaNews Group)

Each side put a few quality chances on goal – including Pope John Paul II hitting the left post in the second half – but it took the extra session before Schaefer provided the contest’s lone tally.

“Definitely a positive performance, obviously disappointed to lose,” PJP II’s Ben Rubinich said. “But happy with the way we both defended and we were unlucky not to score as we hit the post at least once.”

Anderson made a run down the right side then delivered a pass into to Schaefer with the goalkeeper out of the net. Schaefer’s shot was denied by a defender but the rebound bounced to Anderson between the keeper and another defender. Anderson sent the ball to Schaefer in front of an empty net and this time Schaefer knocked it in – Pope John Paul II appealing for offsides but the goal was deemed good.

“The first one, after I missed it, I was like ‘Oh My God,’ I thought I just blew the game,” Schaefer said. “And then two seconds later, I got another chance so it was a big sigh of relief to put it in the back of the net.” The Crusaders entered last week having dropped back-to-back Philadelphia Catholic League contests to La Salle then Archbishop Wood but proceeded to pick up a pair of league victories over Conwell-Egan last Tuesday and St. Joseph’s Prep last Friday with Monday’s result extending the win streak to three for LC (4-4-0, 3-2-0 PCL).

“It’s a few things – one, coming to the realization that we don’t have a bad loss on our record,” Farrell said. “Yes, the La Salle game itself was a bad loss but losing to La Salle isn’t a problem. Losing to Wood, no one is going to be surprised – yeah, they’re both good teams in the PCL, we’re going to lose to a couple teams like that.

“So I think once we realized like ‘OK, we’re not getting blown out by these guys,’ 3-2 to Malvern Prep, 1-0 to North (Penn), we’re getting close we just need to edge ourselves there offensively. So I think coming to that realization, we’re focusing on certain things in practice that kind of get us more aggressive up top and just having a better attitude about going forward and what’s at stake.” Monday also continued Lansdale Catholic’s streak of finding winning goals late, having beaten Conwell-Egan in double overtime and converting a penalty kick just before the end of the second half to edge St. Joe’s Prep.

“It’s definitely good to be hanging in ‘til like the last minute but I will admit it would be better to win these games a little bit earlier, save us some energy,” Schaefer said. “But just good to get the result either way.”

Pope John Paul II (4-6-0, 4-4-0 PAC Frontier) was also looking to earn a third straight victory, which would have put the Golden Panthers back at .500 for the first time this season since splitting its opening two games. PJP II returns to PAC play Wednesday hosting Boyertown at 3:45 p.m.

“We go into training, we work hard and we come in with the right mentality every game that we’re going to win,” Rubinich said. Lansdale Catholic visits Archbishop Carroll in a PCL contest 3:45 p.m. Tuesday. A win provides the Crusaders a boost to their PIAA Tournament chances as it would give LC a sweep of the Catholic League’s three other Class 2A teams (Carroll, Conwell-Egan and Devon Prep).

“That’s unfortunately what’s been going on is we don’t score for the first half or the first 60, 70 minutes and then we’re like ‘Oh.’” Farrell said. “We started to panic but then we start playing better. And it’s like we just got to learn to do that in the first half, not in the second, which it’s a long season, still have plenty of games to go. So we’re just going to keep working at that every day – we got two more big games this week.” Rubinich produced a handful of scoring chances for the Golden Panthers, beginning with a free kick from a tight angle just outside the right side of the 18-yard box. Rubinich tried putting a shot under the crossbar but LC keeper Danny Shelak parried it over for a corner.

In the second half, Rubinich came closest to a goal when he let go a shot that hit off the left post. The ball deflected over to the right post but PJP II could not knock in the rebound. Rubinich later ripped a shot that went wide right with the Golden Panthers earning a corner for the effort.

“When you have a shot and you have an opportunity to shoot, you’re going to shoot,” Rubinich said. “And it was unlucky to hit the post and unluckily the follow-up didn’t go in as well but you know it happens, it’s soccer.” Pope John Paul’s Joe Dawson (21) gets up to head a ball during the Golden Panthers’ game against Lansdale Catholic on Monday, Sept. 26, 2022. (Mike Cabrey/MediaNews Group)

Patrick Cole had LC’s best opportunity before the break, getting free inside the box but outcoming keeper Jason Krum denied his shot with the rebound cleared away by PJP II. The Crusaders’ Jake Magarity put a hard shot on net in the second half but Krum blocked it.