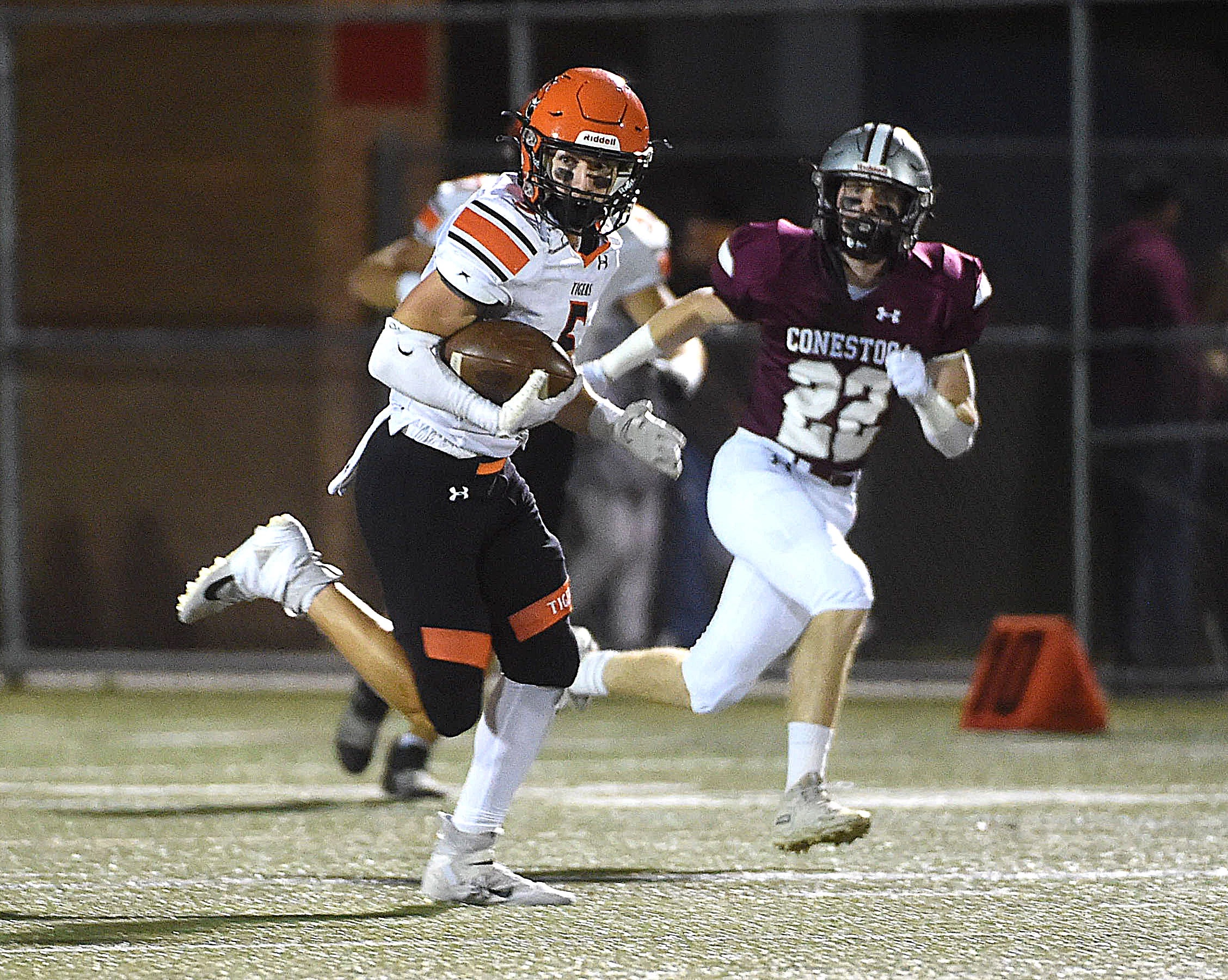 Marple Newtown's Bryan Bogan breaks a big third down pass play into Conestoga territory. He went on to score on the next series at Teamer Field Friday. (PETE BANNAN-DAILY TIMES)

Harris, a blooming freshman sensation, ran for three touchdowns and threw for 253 yards to spark the Clippers (5-0), who overcame a ton of penalties on the frigid night.

Harris made history with a 51-yard throw to Dominic Toy, who used his skills and size to get into the end zone with 3:20 left in the third quarter, staking the Clippers to a 33-0 lead.

“It felt good to make school history,” Harris said. “It’s only my fifth game and there’s more games to come. We need to keep building our chemistry together. We did good tonight, could have done better.”

The Clippers collected their fourth shutout in five games. They’ve outscored the opposition 233-10.

Mitch Ragni rushed for 103 yards for the Vikings (0-5), who hurt themselves with six turnovers. The Clippers scored on five of them.

In other games Friday night:

Episcopal Academy 51, All Saints (Texas) 10 >> Michael Cadden opened the scoring with a four-yard touchdown run, one of what would be four touchdowns on the night by him, leading Episcopal to a plastering of the visitors from All Saints Episcopal School of Tyler, Texas.

Cadden scored on runs of four and 33 yards, connected on an 84-yard TD pass from quarterback Christian Bush and returned a punt 51 yards for another score.

Haverford 35, Radnor 14 >> Tommy Wright had a big night for the Fords. The senior quarterback amassed 146 rushing yards with three touchdowns as Haverford (2-2, 2-1) atoned for last week’s heartbreaking, 15-14 defeat at Conestoga.

Known more for his strong arm and pinpoint accuracy, Wright had a career game running the ball. He was 5 for 8 passing for 60 yards.

“We kind of just saw it on film,” Wright said. “Our line had a really good week of practice. We in general had a really good week of practice. We thought we had to take advantage of the run a little bit more because (teams) are playing a little bit more pass (defense) on us because we have (senior wide receiver) Ethan Mahan … and we have a lot of threats on the outside; speedy guys, so we had to beat him with the run and we executed.”

Haverford opened the game with a nine-play, 65-yard drive. Sophomore running back Zeke Bates (99 yards on 13 carries) got the ground game going with a 24-yard scamper. Wright found the end zone on a QB sneak from a yard out for the game’s first points.

The Fords tallied four TDs in the second quarter. Wright scored from 10 yards out and threw a two-point conversion pass to Justin Marciano to make it 14-0. Freshman quarterback Liam Taylor got in on the fun when he replaced Wright for one play and plowed ahead for a short TD run. Zeke Bates sprinted 17 yards to the house and Wright’s third scoring run gave Haverford a 35-0 cushion with 35 seconds to go before the half.

Radnor (1-4, 1-3) scored the only two TDs of the second half. Amir Byrd caught a three-yard scoring pass from quarterback Tucker Graham in the third quarter. In the fourth, with the second- and third-team players in the game, quarterback Matt Szychulski led the Raptors on a seven-play drive capped by Tommy Deshan’s scoring scamper.

It was all Ridley after that, much to the delight of the homecoming crowd.

Khameen Powell scored four of his six touchdowns after Penncrest took the lead, two in the second quarter and two in the third period to break the game open. Paul Jackson added a pair of TDs for the Green Raiders.

Powell had three TDS receiving, two rushing and one on a kickoff return. His second rushing TD, gave Ridley a 20-13 lead and started streak of 33 straight points scored by Ridley. He also returned a kickoff 75 yards for a touchdown. Jackson scored on runs of 24 and 10 yards.

Quarterback Sean O’Donnell threw a pair of touchdown passes and ran for another score for the Lions.

West Chester Rustin 28, Chichester 7 >> Rustin ventured to Delco for a matchup with Chichester and the Golden Knights came away with a 28-7 victory to improve to 3-1 overall.

Rustin used a first quarter touchdown from Daimon Jacobs to establish an early lead before relying on its rushing attack to grind away at the Eagles defense for the entirety of the game.

Jacobs finished with 121 yards on 21 carries, while his backfield mate Ryan Loper tallied 88 yards rushing. Nathan Pechin tacked on 91 yards and three fourth quarter touchdowns to help his squad pull away from the Eagles as well.

For Chichester, quarterback Quadir Blackwell had 41 yards rushing, 41 passing, and 60 yards receiving to help keep the Eagles on the heels of the Golden Knights for a good part of the game before Rustin pulled away in the fourth quarter. Erskine Wilson had four catches for 37 yards for the Eagles, while Danny Kelly entered the contest in the fourth quarter and promptly threw a 30-yard touchdown to Blackwell. However, it ended up being too little, too late for Chichester, who fell to 1-3 overall.

John Welde connected with Ethan Schulcz for a pair of touchdowns for O’Hara (0-5, 0-2).

Great Valley tied the game at 19 with 37.8 seconds left on Lawron Short’s touchdown catch. The Patriots also converted a two-point conversion. AP had a chance to win it in regulation, but a 39-yard field goal fell short.

Terrence Oliver led the way for the Knights. He scored on a 70-yard touchdown with 8:10 left that put AP up 19-3. It was his third touchdown of the game, to go with scores of 5 and 6 yards in the first half.

Avon Grove 35, Sun Valley 28 >> An interception by Trevor Dosenbach in the second OT period made Noah Brown’s three-yard touchdown stand up as the winner for the Red Devils.

Noah Griffin scored in the first OT for Sun Valley to go up 28-21, but Thad Binstead evened it up for the host Red Devils.

Back in regulation, Stevie Eskridge’s 16-yard run had tied the game at 21 with 9:29 to go and finish a 14-point comeback. Griffin had a 30-yard touchdown run in the third quarter, and Josh Yanonis hauled in a 30-yard touchdown from Eskridge in the first quarter.

Conestoga 28, Marple Newtown 27 >> The Tigers (4-1) suffered their first loss of the season despite the efforts of quarterback Dave  Bertoline and running back Brian Box.

Bertoline threw two TD passes, one of them a 50-yarder to Box just 78 seconds into the contest. Bertoline also scored a touchdown on a 12-yard run. Box also scored on a 33-yard run.

The Tigers trailed Conestoga 28-14 in the third quarter but rallied on touchdown runs by Box and Bertoline. Bertoline’s TD run cut Conestoga’s lead to 28-27, the extra point was blocked.

For Conestoga, quarterback Peter Costigan was a key weapon, scoring three touchdowns on runs of 20, 7 and 83 yards. The Pioneers’ Bryan Beltrante scored on a 90-yard kickoff return in the first quarter.