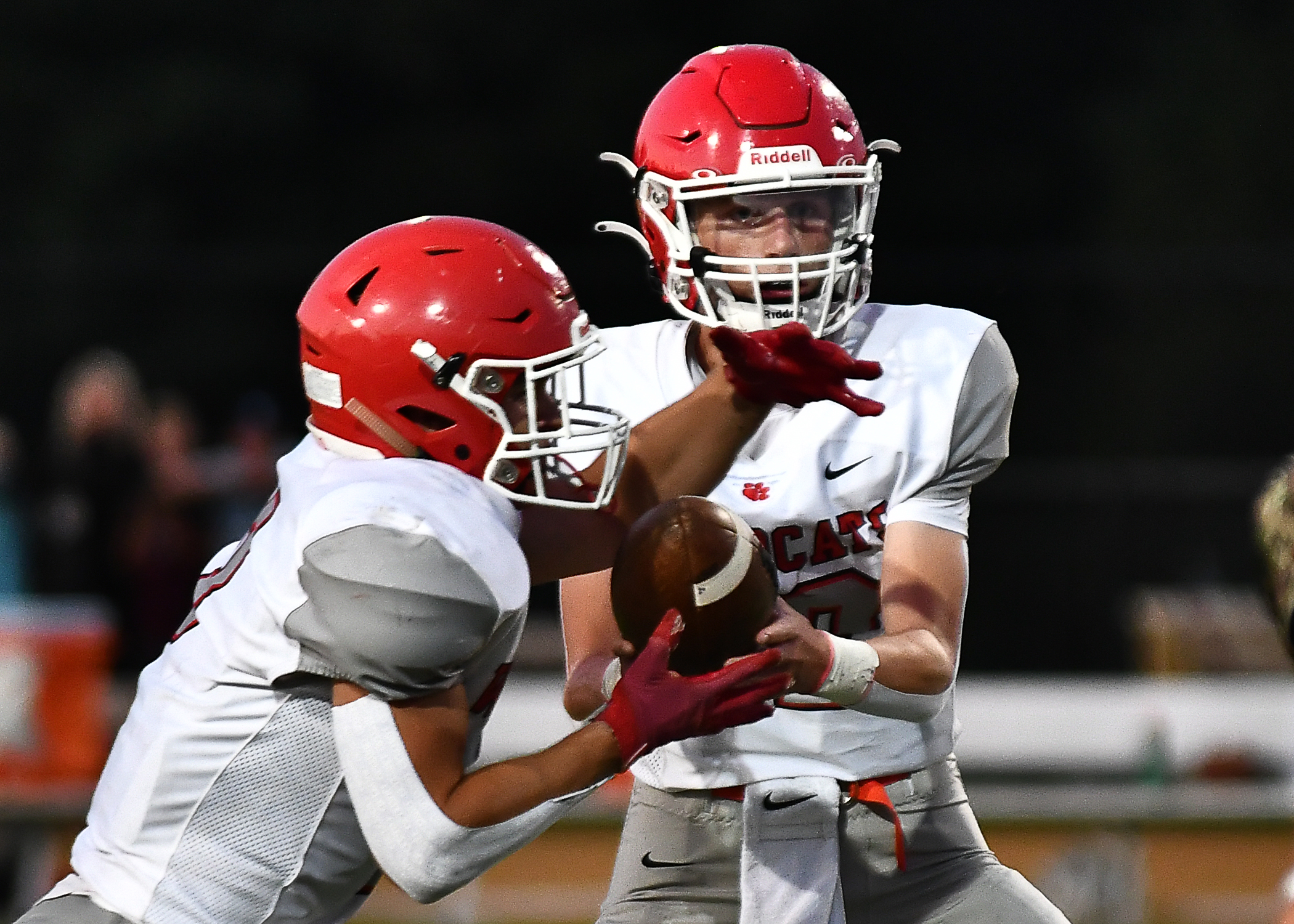 OJR quarterback Michael Reed hands off to running back Hunter Rhoads during a game against Avon Grove. (Bill Rudick - For Medianews Group)

The road to the Pioneer Athletic Conference Liberty Division title goes through Perkiomen Valley and Spring-Ford – and the other contenders know it.

“Beating [Spring-Ford and Perkiomen Valley] is our top goal,” said Brandon Kelley, a senior defensive end for Owen J. Roberts. “We haven’t done that yet, so a successful season means beating at least one of those teams.”

The Wildcats get the first crack at upending the defending champs this weekend.

Perkiomen Valley (3-1) at Owen J. Roberts (3-1), 7 p.m. Friday >> The Wildcats hope to avoid a repeat of last season, when a promising start came to a screeching half in a one-sided opener at PV. This year, the game is back in Bucktown and so is a stifling defense that’s allowed only 12 points over a three-game winning streak. Kelley leads OJR with seven sacks and hopes to play despite leaving the game early in last week’s win over Upper Merion.

Perkiomen Valley comes in off their first setback, a 26-10 defeat at the hands of Roman Catholic. Coach Rob Heist lauded his defense’s ability to make a loaded Roman squad work for their points, while pointing to the game as valuable learning experience for sophomore quarterback Patrick MacDonald, who continues to stabilize the Vikings’ offense in the absence of senior Danny Koehler.

Heist pointed to contributors on both lines – Brad Curci on defense, and JC Dugery on offense – as keys to getting back on track this week, along with the importance of avoiding the turnovers that have plagued the Vikings recently.

Boyertown (2-2) at Spring-Ford (2-2), 7 p.m. Friday >> The league opener marks Boyertown’s chance to measure just how far they’ve come under new coach Justin Konnick. Impressive shutout wins over Upper Perkiomen and Pottsgrove have instilled confidence in the Bears’ squad, a fact acknowledged by Spring-Ford coach Chad Brubaker who pointed to the confidence and buy-in apparent in his opponents’ early play.

For the Rams to stop their two-game losing streak, stopping Boyertown’s PAC leading rusher Cole Yesavage (7.5 yards per carry, 518 yards, eight touchdowns) will be paramount. Linebackers Matt Yurko and Mike Bendowski will be the keys, as each impressed during the nonleague slate.
“Our defense is continuing to play well enough for us to win games,” said Brubaker.

Spring-Ford will look establish their own running game and limit mistakes offensively. Sophomore quarterback Matt Zollers leads the PAC with nine TD passes thus far, but the Rams are averaging just 54 yards rushing per game over their previous three contests.

Pottstown (1-3) at Pottsgrove (2-2), 7 p.m. Friday >> Cross-town rivals renew acquaintances at Pennypacker Field, where the Falcons continue to look for answers in the wake of a non-league run that did a number on the team’s depth, especially in the offensive backfield. Brandon McGinley and Demetrius Carter continue to emerge as playmakers, while Tre Cook figures to see increased opportunities carrying the ball and on special teams.

Pottstown hung gamely with Norristown before succumbing 21-12 last week but added another weapon in their background as senior Joneil Oister saw time at quarterback. Nahzier Booker remains a workhorse for the Trojans’ offense, while Aaron Winfield averages seven yards per carry on his carries. Booker also scored on a fumble recovery on defense, underscoring the importance of forcing turnovers if the Trojans hope to gain a signature victory over their neighbors.

Phoenixville (2-2) at Upper Merion (2-2), 7 p.m. Friday >> The battle in the Frontier Division figures to be an interesting one this year, with several contenders chasing a Pope John Paul II team who’s won the previous two titles. Two of those squads meet in King of Prussia, where Upper Merion looks to put together a complete performance with an emphasis on limiting the penalties that doomed the team after a strong first quarter last week at Owen J. Roberts.

“We’ve been guilty of beating ourselves in all facets of the game,” said head coach Davis Chubb. “That just can’t continue to happen.”

Norristown (2-2) at Methacton (2-2), 11 a.m. Saturday >> To paraphrase a great coach, the best thing about winning two in a row is the opportunity to win three in a row. Both sides have that opportunity when the Eagles and Warriors meet up on Saturday morning.

Norristown’s wins over Pottsgrove and Pottstown saw the emergence of running back Jamal Griffin, who’s become the Eagles’ go-to offensive weapon while the defense continues to make life hard for opponents, forcing them into one-dimensional attacks and causing repeated turnovers.

Finding a second dimension will be the challenge for Methacton, whose ground game carried them in last week’s win over Upper Perkiomen. Michael Chipman and Collin O’Neill power an offensive line that is the key to the Warriors’ ball-control style, with placekicker Tyler Ready as a unique weapon on special teams and a potential X-factor in the close, low-scoring type of games Methacton tends to play.

“We had a successful non-league run, but that part of the season is over and a new season begins,” said the first-year coach at PJP. “Every team in the PAC, whether they are in the Frontier or the Liberty Division, gets a fresh start this weekend. We need to continue to improve.”

Pope John Paul looks to bring the same explosive offense to league play they’ve displayed thus far, with an offensive line powered by senior Nyzir Lake and a loaded array of skill players including QB Luke Terlesky, RB Boyd Skarbek, and TE/WR Brendan Kenning. For their part, Upper Perkiomen saw further productivity from the duo of Mike Boyle and Chidike Eruba in the passing game, but figures to have its hands full on defense Saturday afternoon.

Ephrata (2-2) at Daniel Boone (1-3, 0-1 Lancaster-Lebanon 3), 7 p.m. Friday >> Rob Flowers’ Blazers moved the ball well in last week’s loss to Garden Spot, but the turning point came when Boone managed only 10 points despite a half-dozen journeys into the red zone.

Finishing each drive and maintaining confidence for 48 minutes will be pivotal as the Blazers face new Lancaster-Lebanon division rivals Ephrata. The Mountaineers’ pass-heavy attack puts the onus on standout free safety Jared Hewitt to continue his strong play.