Coatesville blitzes Unionville as offense continues to find its identity 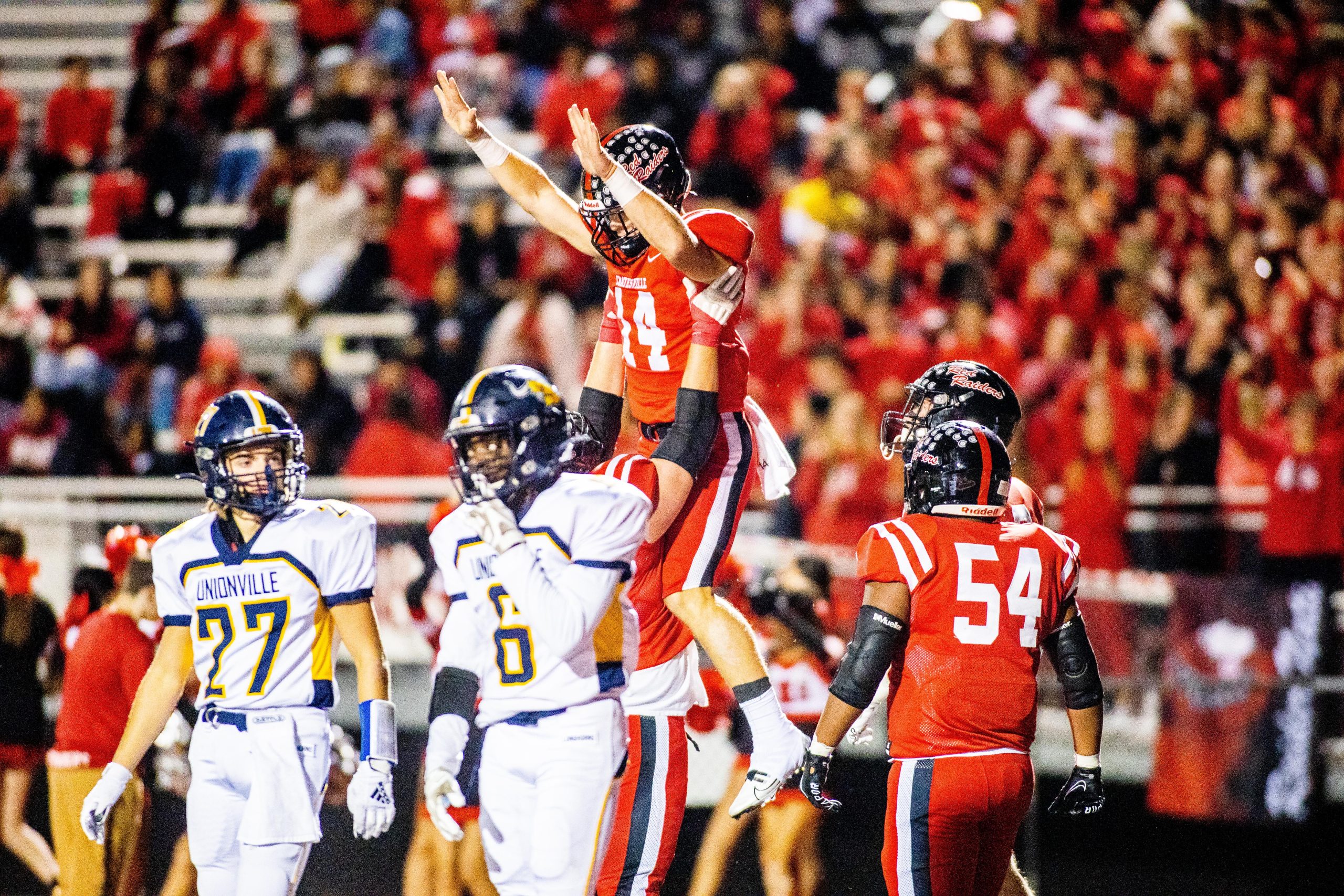 CALN >> Coatesville ran 19 plays in the first half against Unionville, Friday, totaling 393 yards and five touchdowns, and it wouldn’t be a stretch to say the Red Raiders haven’t fully gotten in sync yet, offensively, this season.

For the second straight week, Coatesville got its points in a hurry but also lacked repetitions for its starters. It’s all part of the process as the inexperienced skill players learn to mesh with veteran quarterback, Harrison Susi. A date with Downingtown West is in two weeks.

Against Unionville, Coatesville scored 28 points before it ran its fifth offensive play and coasted to a 54-7 win in the Ches-Mont League crossover game. “(Unionville) always plays us tough and I think they were a little banged up,” Coatesville coach Matt Ortega said. “We can’t control our opponent the last two weeks, but all we care about is getting better every day.”

Coatesville’s first play was a 32-yard jet sweep by Amir Haskett. Susi went 38 yards for the opening score the next play to give the Red Raiders (5-0) a 7-0 lead 48 seconds in. On Unionville’s first play on the ensuing drive, Donte London picked off Levi Brawley and raced 32 yards for a touchdown.

The Longhorns picked up a couple first downs on their next possession, but after punting again, Damon Watson sprinted for an 81-yard touchdown on Coatesville’s first play. Up 28-0 late in the first quarter, Coatesville finally hit a speed bump. On the Raiders’ fifth offensive play, Susi was picked off on a tunnel screen, and Matt D’Amico took it to pay dirt to get the Longhorns on the board. That interception was Coatesville’s first turnover of the season, and after Susi’s second TD run the next series, he was intercepted again, this time by Unionville’s Luke Stang.

In his 24th career start, Susi has thrown just seven total interceptions, and it was only the second time he had multiple picks, dating back to last season’s District 1-6A title game against Garnet Valley.

“I think we’re still growing and developing on offense,” Ortega said. “We’re still trying to find certain rotations and we have seniors getting their first experience on varsity. We’re getting better and finding our identity.” Haskett has scored on his last three receptions and London has proven to be a big-play threat, averaging over 30 yards per catch, but Susi is still working on his chemistry with his new weapons.

“Honestly, it’s been rough,” Susi said. “I lost all my best friends (to graduation). These guys are starting to grow on me. We’re building chemistry and I think the sky is the limit.”

The third year starter has run for 405 yards and seven scores, but the fact that he has completed 42 percent of his passes and Coatesville’s offense is putting up over 35 points per game is a scary thought for opposing defenses. “Our philosophy for dual-threat quarterbacks, guys like Jordan Young or Ricky (Ortega) or Harrison, is that we’re going to ride them in the big games,” Matt Ortega said. “We’re going to save some of the work load when we can, but we know Harrison is going to be there in the big games. He’s got a ton of grit and hunger and leadership and all he cares about is getting the win.”

Spencer Ferguson scored on a 49-yard touchdown run, Qwan James scored on a 50-yard TD run and Buggy Ortega threw a four-yard TD to Anthony Kelly to close out the scoring for Coatesville, who totaled 497 yards of offense and held Unionville to 63. The Raiders will travel to West Chester Rustin (3-1) next week, while Unionville hosts Chichester.