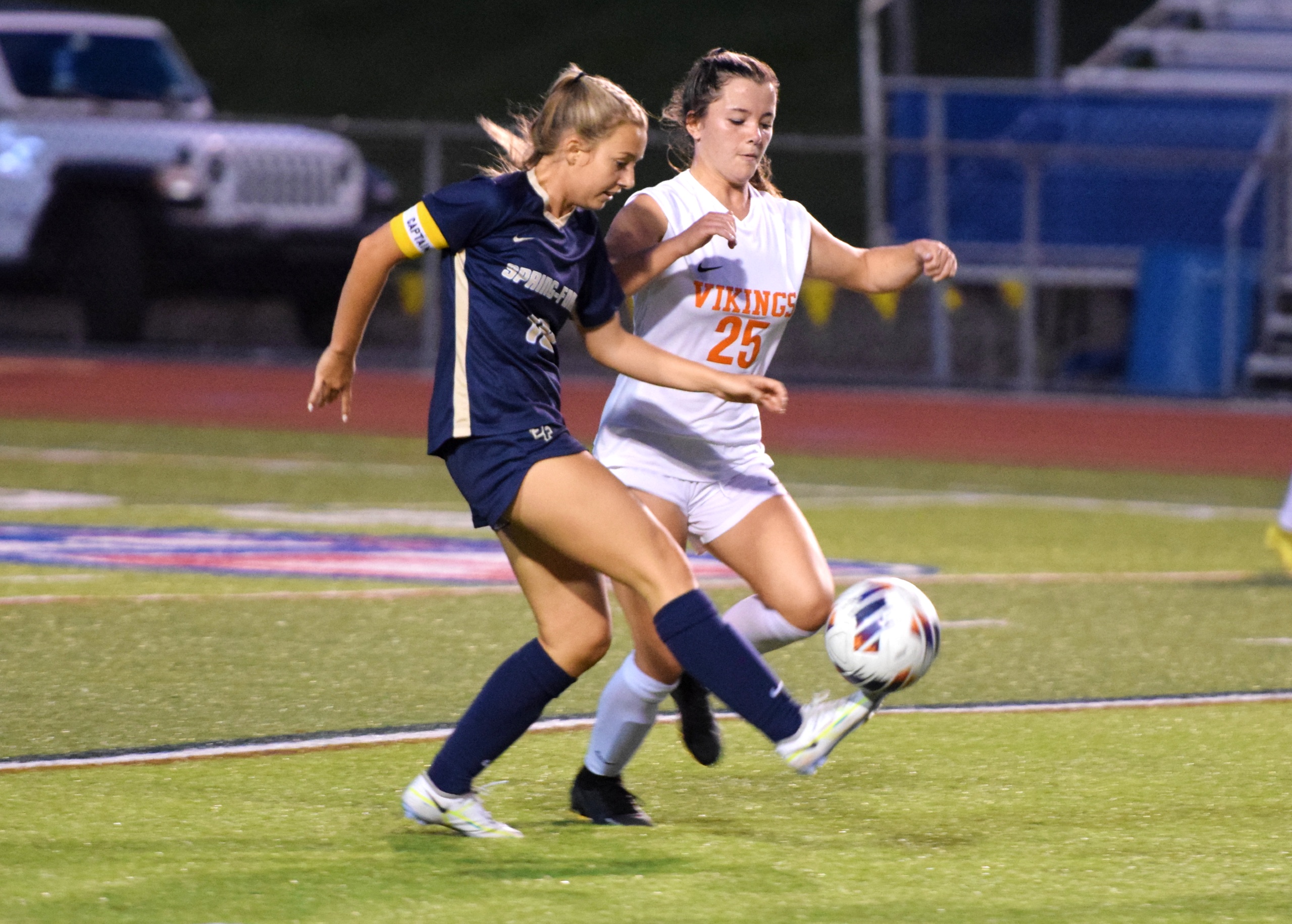 ROYERSFORD >> The Perkiomen Valley girls soccer team is sticking to what it knows.

“We’re coming in as the underdog,” says senior Dorothy Chesshire.

It’s hard to argue considering she and the current Vikings spent the rest of their high school careers outside the top tier of the Pioneer Athletic Conference Liberty Division.

The way the Vikings view themselves hasn’t changed, but their standing has: the underdogs are current top dogs.

Perk Valley maintained its unbeaten start to the Pioneer Athletic Conference campaign Tuesday night but were unable to solve host Spring-Ford in a 0-0 draw at Coach McNelly Stadium.

“Definitely not the result we were hoping for but we’re still happy and pushing through. It’s not a loss,” said Chesshire, a senior forward.

PV has finished in the bottom half of the division the past three years, so its sizable group of seniors, led by captains Chesshire, defender Emma Stankunas, midfielder Lily Tremba and Rylie Pinkerton (injured), aren’t taking anything for granted.

“It’s great,” Stankunas said of PV’s strong start. “But we’re taking it game by game and not getting cocky over it. We’re just working to win every game we play.

“We feel like it’s our greatest opportunity this year and every person is taking advantage of it.”

The Vikings weren’t able to take advantage of the Rams, largely thanks to the big saves of SF senior goalie Erika Eickhoff, who had saved at least three golden opportunities as part of her 10-save night.

“It was a challenge but mentally I was there,” said Eickhoff. “We all sacrificed and gave everything we could for the team. I’m very proud of my team. I think we showed relentlessness and persevered through the challenges and rose up to the challenges.”

As their player of the match, Eickhoff received the team’s oar, a motivational tool to symbolize the Rams ‘rowing together as a team’ this fall.

“We had a couple hard games in the beginning but I feel like we’re ready to come back better than ever and show everyone who we are,” said two-year starter Eickhoff.

Perk Valley could feel the most hard done by the result after having the better of play and the scoring chances over the 100 minutes.

The first 40 minutes were light on goal-scoring threat with the game mostly played through the midfield, with junior Ally Garvey and sophomore Molly Kennedy leading the Rams’ charge against senior Maddie O’Donnell, junior Rain Boyd and Tremba for the Vikings.

PV’s best early chance was on a Gianna Corropolese shot from the left that flashed across goal while Spring-Ford’s best was a Sarah Hang cross knocked in by Lena Ackerman, who came from an offside position.

The second half picked up the pace. Arguably the Rams’ best chance of the night was on a 30-yard Garvey free kick that PV junior Olivia Hulayew (five saves) tipped wide with her off hand.

The Vikings controlled the latter stages though with big chances coming through senior Nicole Bottomley-Lytle, Boyd and promising freshman Giavanna Marciano, who got free on the doorstep with under two minutes in the first overtime but was stoned by Eickhoff.

Spring-Ford was plagued by a lack of passing touch in the scoring third while PV’s back line of Stankunas, Annabelle Booker, Haley Moyer and Madison Lindsay handled the rest.

Ultimately, it wasn’t the best attacking night for either side, but not losing is a result both teams can appreciate.

For the Vikings coming from their past few years of middling results, the positive results will never go unappreciated.

“When we win a game it’s a big deal to us. We really appreciate all of our wins,” said Chesshire.

“We keep it positive and go into every game like we can win it and will win it and we really bring it on the field,” said Stankunas.