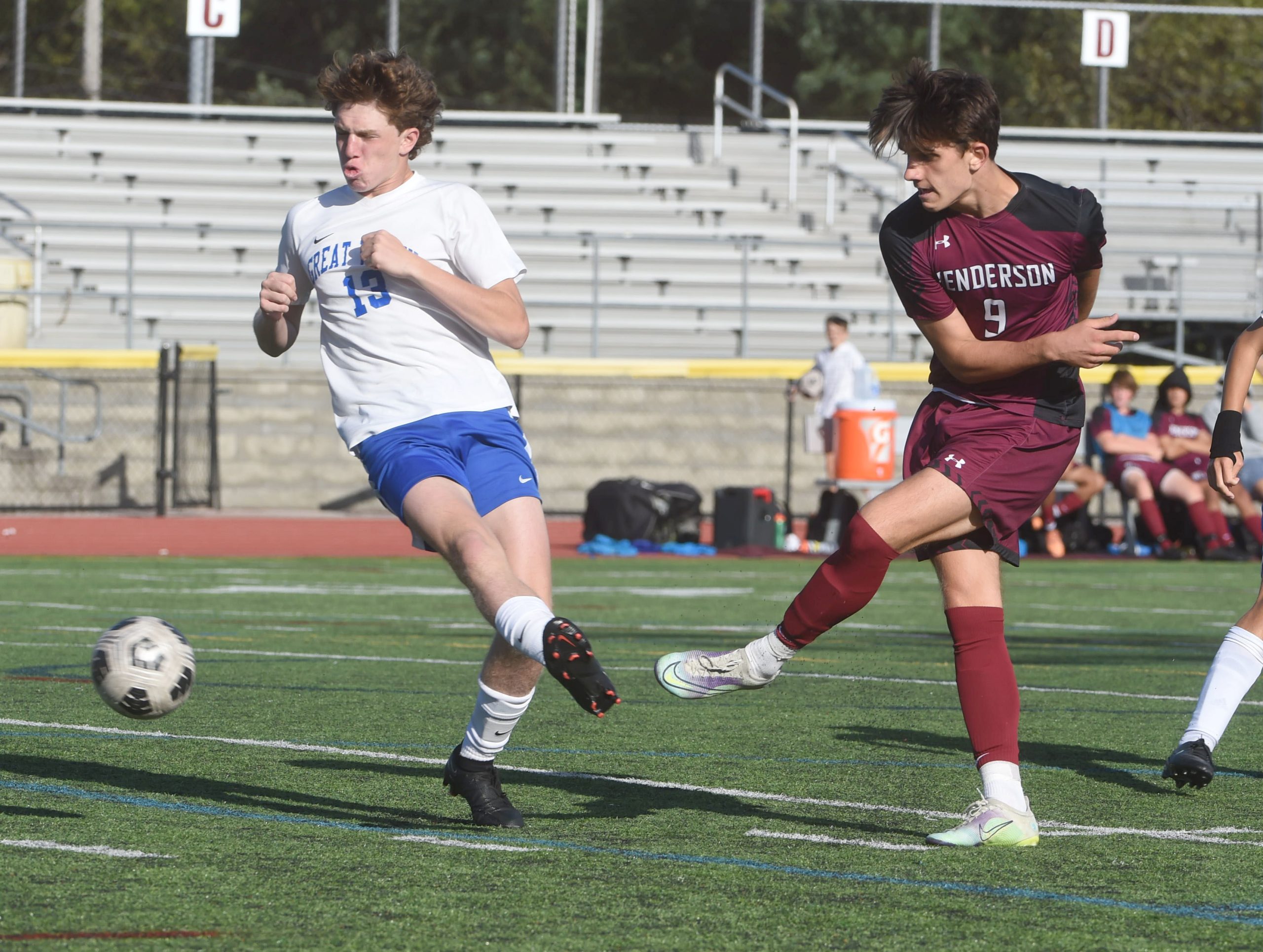 WEST CHESTER >> What was a boys’ soccer clash between Ches-Mont unbeatens – two of the top seven in the latest District 1 4A power rankings – quickly turned into such a one-sided affair that both sides were a bit surprised.

“We weren’t sure what to expect, but we knew we wanted to come out hard,” said West Chester Henderson head coach Chaz Wilson.

“We thought this would be a tough game – a Ches-Mont game – and Great Valley is ranked high,” added senior forward Joe DeAngelis. “But our goal is to come out hard and we did.”

The host Warriors poured in three goals in a 12-minute stretch of the first half and went on to cruise past Great Valley 6-0 Thursday. Henderson is now 5-0 in the league (8-2 overall), and looks to have the most diverse and explosive attack the program’s had in a long time.

“We are experienced now and we have a big senior class that has been together for a long time now,” said DeAngelis, who notched three goals. “Our offense is very explosive because we have a lot of guys who know how to do the right things with the ball.”

On the flip side, it was a tough day for the Patriots (2-1-1, 5-2-1 overall). Great Valley had a prime chance to get the lead in the opening four minutes of action, but senior Ethan Pfau’s shot glanced off the crossbar. In the remaining 76 minutes of action, the Pats managed just five shots on goal, and most came late against the Warriors’ backups.

“We started off alright, then a mistake turns into a goal and the heads go down,” said Great Valley head coach Dave Moffett. “It just cascades from there. It just wasn’t our day. The score line is not indicative of what we are.”

Henderson co-captain Ryan Kuegler made an impact early and often. He delivered a pass to fellow senior teammate J.J. Flannery, who scored off a rebound of his own shot midway through the opening half. Moments later, DeAngelis registered his first tally, and then made it 3-0 with his second when he out-muscled defenders to get possession and room to spin, shoot and score. The assist went to Kuegler.

“We identified pretty early in this one that there was space out on the wings, so if we got it wide we could attack,” Wilson explained.

“If we can keep it in our opponent’s end, the bounces are going to eventually come our way and we are going to get our scoring chances. And when you have strikers like Joe DeAngelis, and Ryan (Kuegler) and (sophomore) Josh Jarden are all over the place, it helps.”

The Warriors then scored three more times in the first 14 minutes of the second half. Nathaniel Griffin converted a free kick from fellow senior John Norbury, and then Kuegler notched his third assist off a corner kick and goal by junior Nick Riccardi. The final score, with 26:50 to go, was a deflected shot by Jarden that DeAngelis finished off.

“We had a lot of these (seniors) up on varsity as sophomores during the COVID year, and over time they have matured,” Wilson added. “They played together growing up and now they want to do something special this season.”

As expected, Henderson dominated statistically in shots on goal (26-6) and corners (10-3). Moffett was impressed.

“They have speed all over the field, they have skill at every position, they have guys that know how to score, and a great engine in the middle in Ryan Kuegler,” he said. “They are dynamic and I think they are just going to get better.”

The busiest player on the field, however, may have been Patriots’ senior goaltender Seth Turner, who finished with 20 saves.

“Seth is phenomenal,” Moffett said. “But collectively in front of him, we just did not do a good job.”

Wilson is in his first season as the Warriors’ head coach. He was Dom Popolizio’s top assistant a year ago, but the two have swapped positions due to Popolizio’s work commitments.

“This is the time of the season where we are playing a lot of good teams and we have to keep stacking wins,” Wilson said. “One of the goals heading into the season was to get a to-eight seed (in districts).”