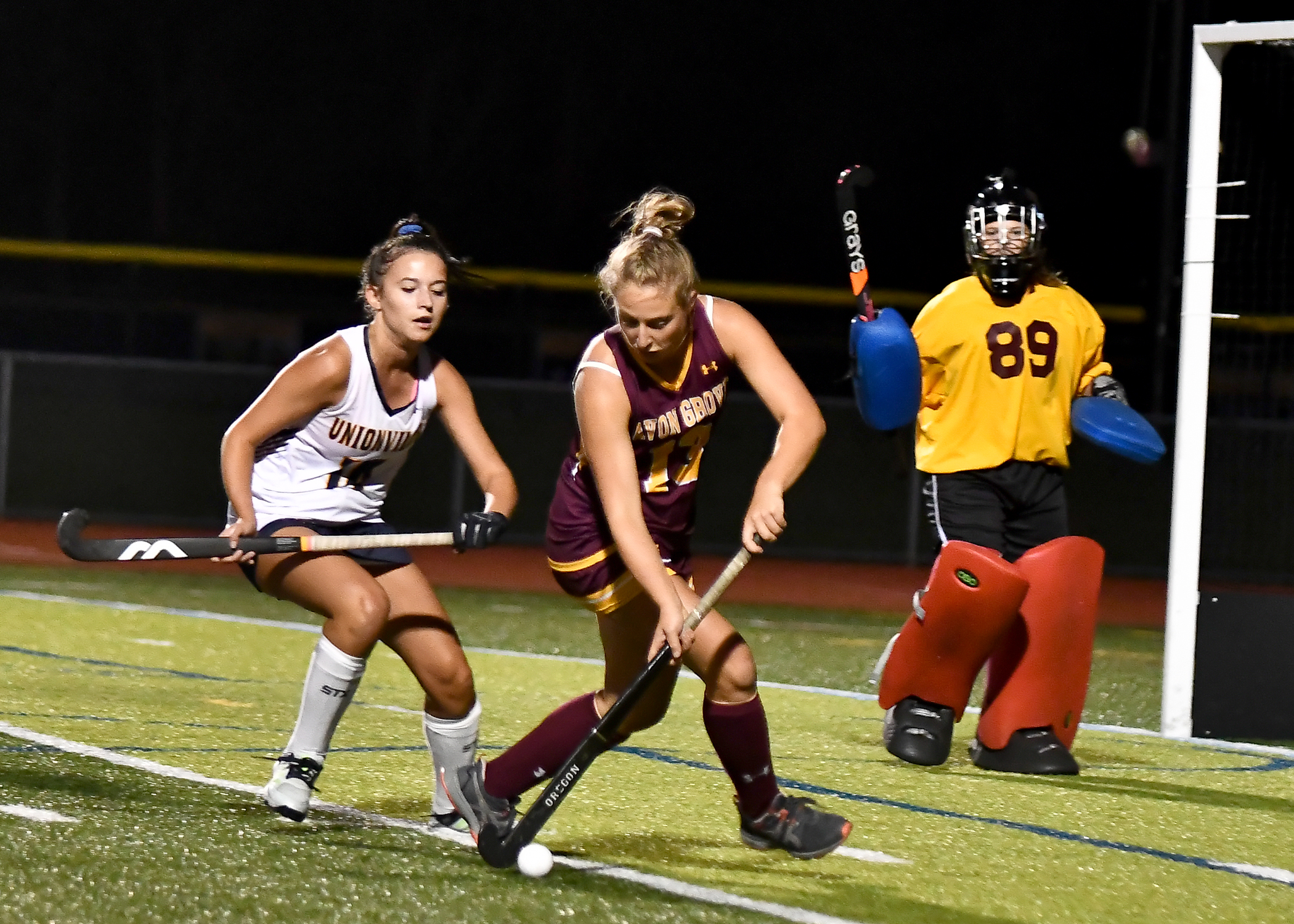 EAST MARLBOROUGH >> The Avon Grove field hockey team came into Thursday’s Ches-Mont League clash with Unionville with an 8-1 record. Their only came in a nonleague contest to Cardinal O’Hara. The Longhorns are fresh off a big win over perennial Ches-Mont power Downingtown West, so expectations were for a hotly contested game.
On the strength of three goals over the second and third periods, sandwiched by some fantastic defense, it was Avon Grove’s night, as the Red Devils (9-1 overall, 4-0 Ches-Mont) topped the host Longhorns by a score of 3-1.

“Whenever we go up against Unionville, we know it’s going to be a pretty evenly matched game, with mutual respect,” said Red Devils coach Giulz Antignani. “But, I thought tonight the girls worked really well off each other. This was a really nice overall team win.”
The Red Devils struggled in the early going, and just couldn’t seem to work up any offense. The Longhorns (2-2, 5-4) dominated possession for most of the first period, keeping the ball in their offense half and putting pressure in the circle. Thanks to the play of the Avon Grove defense, led by goalie Brooke Benjamin, who had two huge saves around the three-minute mark, the game stayed scoreless through the first period.
“We knew that Unionville was going to come out with a lot of energy,” said Benjamin. “We had to match their energy. Our coach always says that defense wins games, and we just try to prove that. I knew our offense would score for us, so we just had to do what we could to stop Unionville.”
Avon Grove struck first, when Morgan O’Donnell found the back of the cage early in the second. The Longhorns answered right back 30 seconds later when Molly Main scored off an assist from Brooke Phillips.
“We had plenty of opportunities,” said Unionville coach Maureen Richards. “We have to be able to take advantage of them more than we did. We’re trying to find that consistency so we aren’t on the roller coaster of high one game and down the next.”
The Red Devils got back out in front early in the second half. Just over two minutes into the third period, Avon Grove was inside the circle, and taking shots. After goalie Julia Baird booted away one shot, O’Donnell grabbed the rebound, and sent it over to Madison Britton, who slammed it home for the go-ahead goal.

“We worked really well tonight off-ball, and did a good job passing upfield and finding open players,” said Britton. “We’ve been playing really well. We’ve had great chemistry, and that is helping us pick up wins. That goal was big, because we seem to be able to build momentum after getting out front.”
The Red Devils tacked on one more, when Maddie Register, with an assist from Maggie Boyle, made it a 3-1 game with 5:42 left in the third.
Unionville stepped it up again in the final period, but once again, the Avon Grove defensive unit was up to the task, and kept the Longhorns from any further scoring.
“Camryn Spancake and Brooke did a really nice job for us,” said Antignani. “The whole defense just has great chemistry and communicates so well. Every game in this league is going to be a battle. It’s a very competitive league. We got a taste of the playoffs last year, and I think the early loss in the second round served to motivate us for more this season.”