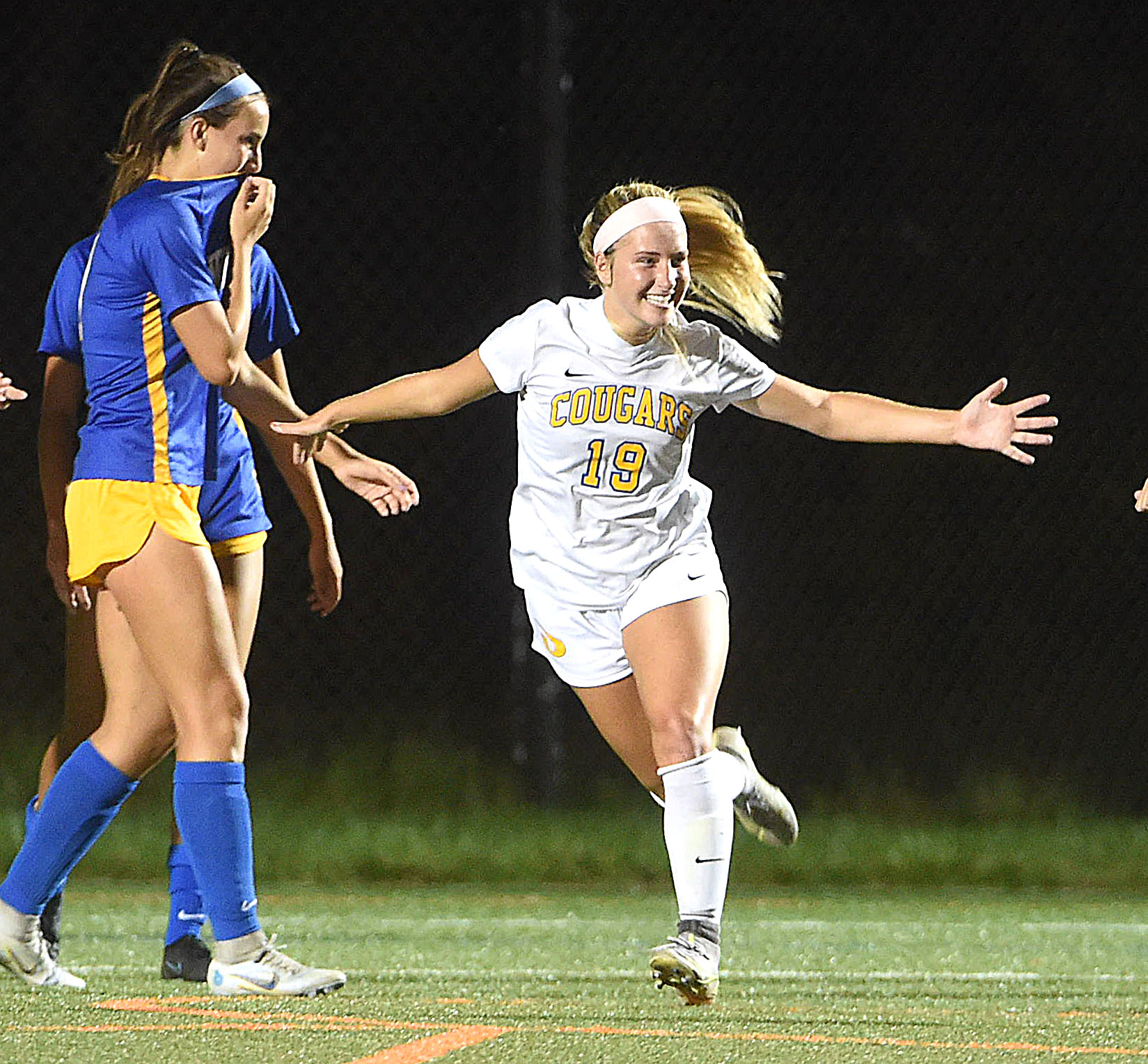 DOWNINGTOWN >> With time winding down, overtime was staring everyone in the face at DiSerafino Stadium, but Lauren Reimold and her right foot had other ideas.
Reimold’s wonderstrike from distance with a little over three minutes left broke a tie to send Downingtown East to a 3-2 girls’ soccer victory over Downingtown West in the neighborhood Ches-Mont League National Division battle Wednesday.
The come-from-behind victory kept the Cougars (4-0-1, 7-2-2) in frist place in the National and ran their unbeaten streak to four games. The Whippets (3-1-1, 5-2-1) lost for the first time since an opening-day defeat to Perkiomen Valley.

“How good is it to beat Downingtown West in the last five minutes of the game?,” said D-East coach Jason Luzak. “It was a great battle. In my opinon, we did very well in the first half to possess the ball and get some scoring opportunities. They have a great defense and a great player up top in No. 8 (Hailey Coyle). But, we kept the pressure on them and got a goal in the first half and we got the two in the second half.”
The opening stages of the first half was a cagey affair – both teams had forays in the opposite end that excited the crowd but was dealt with efficently by the defense. They played almost half of the first 40 minutes before a shot was recorded.

The Cougars slowly started to get more of the territorial edge and they turned that into a goal with 4:40 left. On the game’s first corner kick, East took it short quickly, the cross bounced around in front before Reimold turned it into the back of the net for a 1-0 lead.
The Cougars took that lead into the halftime break, outshooting the Whippets, 5-2.
West came out of the break firing and tied the score just four minutes after the restart. Hailey Coyle was fouled about 25 yards from the goal. Senior Laney Klepac stepped up to the free kick and delivered a laser that eluded the fingers of a diving Lillian Matte and nesteled into the top right corner to tie the score at 1-1.
Before the celebrations had a chance to subside, West was at it again. Off another dead ball situation, Katie Klepac scored off a cross, and 28 seconds after knotting the score, the Whippets took the lead.

The West defense kept the Cougars at bay until with 4:11 remaining, a deflected cross from Reimold fell into the path of Madison Shumate, who buried it into the back of the net to make it a 2-2 contest.
“They battled right to the end. There was no give up,” said Luzak. “It wasn’t like, ‘Oh, we’re down 2-1 and let them run all over us.’”
With 3:03 left, Reimold had the ball at midfield and while most of the crowd was expecting a pass, she stepped into a shot from 30 yards out that dented the back of the net and sent the East crowd into hysterics.

“I was,” replied Reimold when asked if she was thinking shot all the way. “I got it and I took it right away and I can feel it going in. It was amazing. I just had a spot and hit it and it went over the keeper’s head.”
The Whippets had one final chance in the final minute. Following a handball call on East, Laney Klepac fired a low shot from about 25 yards that went past the jumping wall, but carried just wide of the left post.
East saw out the last minute to walk away with the thrilling win, and at least briefly grabbed control of the division race.
D-East has another vital game on Tuesday when they visit Avon Grove. The Whippets visit Haverford High on Saturday, before taking on Sun Valley on Tuesday.