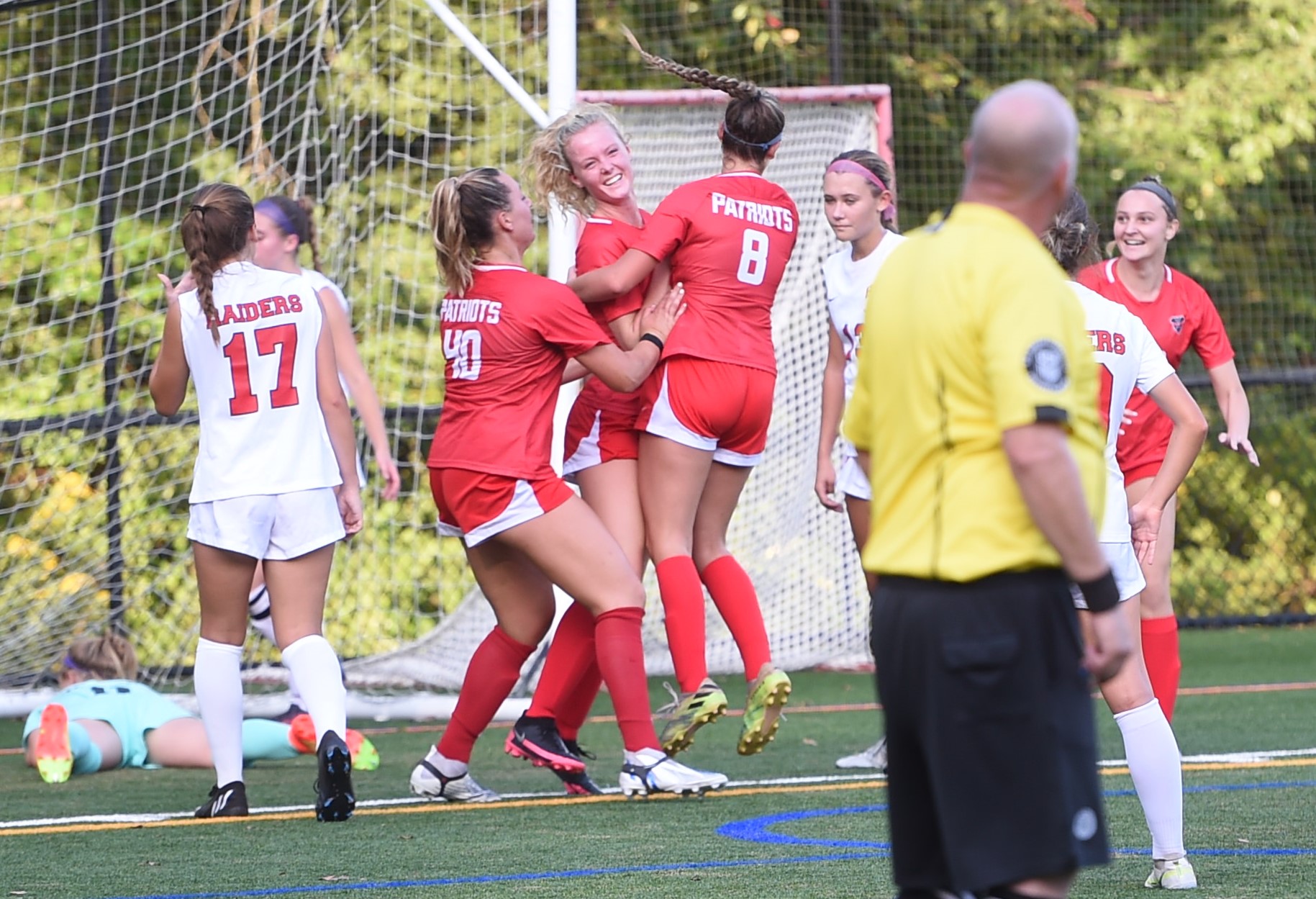 WHITEMARSH >> As things got a bit hectic in front of the goal, Emma Goodwin remembered she had prepared for just these moments.

“At practice we worked on if the first person doesn’t get it just being there to get something on it,” the Germantown Academy girls soccer junior said. “So that’s just what I tried to do. Luckily it went in.”

A shot following a Patriots corner kick hit the crossbar with the ball falling right in front of Goodwin, who proceeded to send the rebound into the back of the net.

“Usually I’m not the best scorer on the team,” Goodwin said. “So when it was right there I was kind of hoping for the best.”

Goodwin’s tally broke a scoreless tie in the 53rd minute of Wednesday afternoon’s nonleague matchup with visiting Hun School. The Patriots held off the Raiders until the 70th minute when Olivia Spektor scored on a brilliant free kick and the two sides went on to finish in a 1-1 draw.

“We missed that shot yesterday,” said GA coach Christopher Nelson of Goodwin’s goal. “And again, not that we were going to beat Episcopal (Academy) yesterday from that but we had that same situation yesterday where a ball came back out and two people whiffed on it. So going into the game today we were like somebody needs to put their body on a ball in the box. So they did everything we wanted them to do.”

After falling to 4-1 to Episcopal Academy in their Inter-Ac opener Tuesday, the Patriots and goalkeeper Gabby Bowes held off the consistent pressure of the Raiders – last year’s New Jersey state Prep A champ – before taking advantage of a chance up the field to grab a 1-0 lead with 27:12 remaining.

Spektor’s strike from distance pulled Hun level at 10:52 and while the result ended up being a tie, for the Patriots (2-3-2, 0-1-0 league) that meant putting a stop to a three-game losing skid.

“Especially on the heels of yesterday, Episcopal’s really good and we worked hard but to come back out today and to get a result on the heels of that is great,” Nelson said. “And especially I thought the first half we were on our heels a fair amount but I was really, really happy with them in the second half obviously. Hard not to be.”

Germantown Academy goalkeeper Gabby Bowes collects a ball in the box ahead of Hun School’s Sophia Cannuli (24) during their game on Wednesday, Sept. 21, 2022. (Mike Cabrey/MediaNews Group)

Bowes, a sophomore, provided GA with a strong effort in net with a few quality saves while confidently coming off her line to snuff out Hun School opportunities before they became truly threatening. She also got some help from the goal frame, as the Raiders knocked a shot off the left post in the first half then late in the second half hit the crossbar.

“I was like let’s get this game through and get this game over with,” said Bowes, who also plays basketball at GA. “We’d had a tough loss yesterday and we were just coming out for that win, trying to better, learn a lot from this game.”

Bowes came up big early after halftime, blocking a close-range shot from Riley Hayes near the right post to keep the match scoreless.

“I just said to her she just gets better every game,” said Nelson of Bowes. “There’s something that happened yesterday that she wasn’t satisfied with and she fixed it today. Her learning curve is great, she’s a great kid to work with, she’s hard working, she’s smart, she incorporates feedback right away.”

Germantown Academy opened the season with consecutive wins over Germantown Friends (5-1 Sept. 7) and Hill School (1-0 Sept. 9) but after a 1-1 tie with Lawrenceville School Sept. 10 the Patriots dropped their next three before earning the draw Wednesday.

“I would say we’re really, really young,” Nelson said. “We have a couple seniors but really we’re pretty youthful. So as we continue to talk about what we want to do it’s just improve every single game.”

Nelson said that GA’s defense has come together with junior midfielder Madison Kerest and junior center back Elizabeth Schied both helping to keep things steady on the field for the Patriots, who return to Inter-Ac play Friday visiting Agnes Irwin School at 4 p.m.

“We’re starting to look more dangerous on offense,” Nelson said. “We’re starting to find some looks at the goal that we weren’t finding two weeks ago. So that’s helpful. I think that the place for us is to maintain that intensity but to be calm on the ball and start to knock it around a little bit. And I think sometimes we get a little frantic once in a while but again that’s the nature of the beast in high school soccer sometimes.”

Goodwin’s goal came following a GA corner from the right side, the ball sent into the 18-yard box and eventually a shot knocking off the crossbar and dropping right to Goodwin in front with the junior sending it past the keeper.

“We had talked about at halftime intensity high but still being relaxed and composed,” Goodwin said. “So we were just trying to work on that.”

Hun School’s equalizer came on a free kick from well outside the box, Spektor placing a shot over the reach of Bowes and into the top left corner.

GA earned a free kick late in the second half but put a shot attempt over the net. After the Raiders hit the crossbar near the end of regulation, the Patriots pushed to counter in the final seconds but came up empty and time expired. The teams did not play overtime.