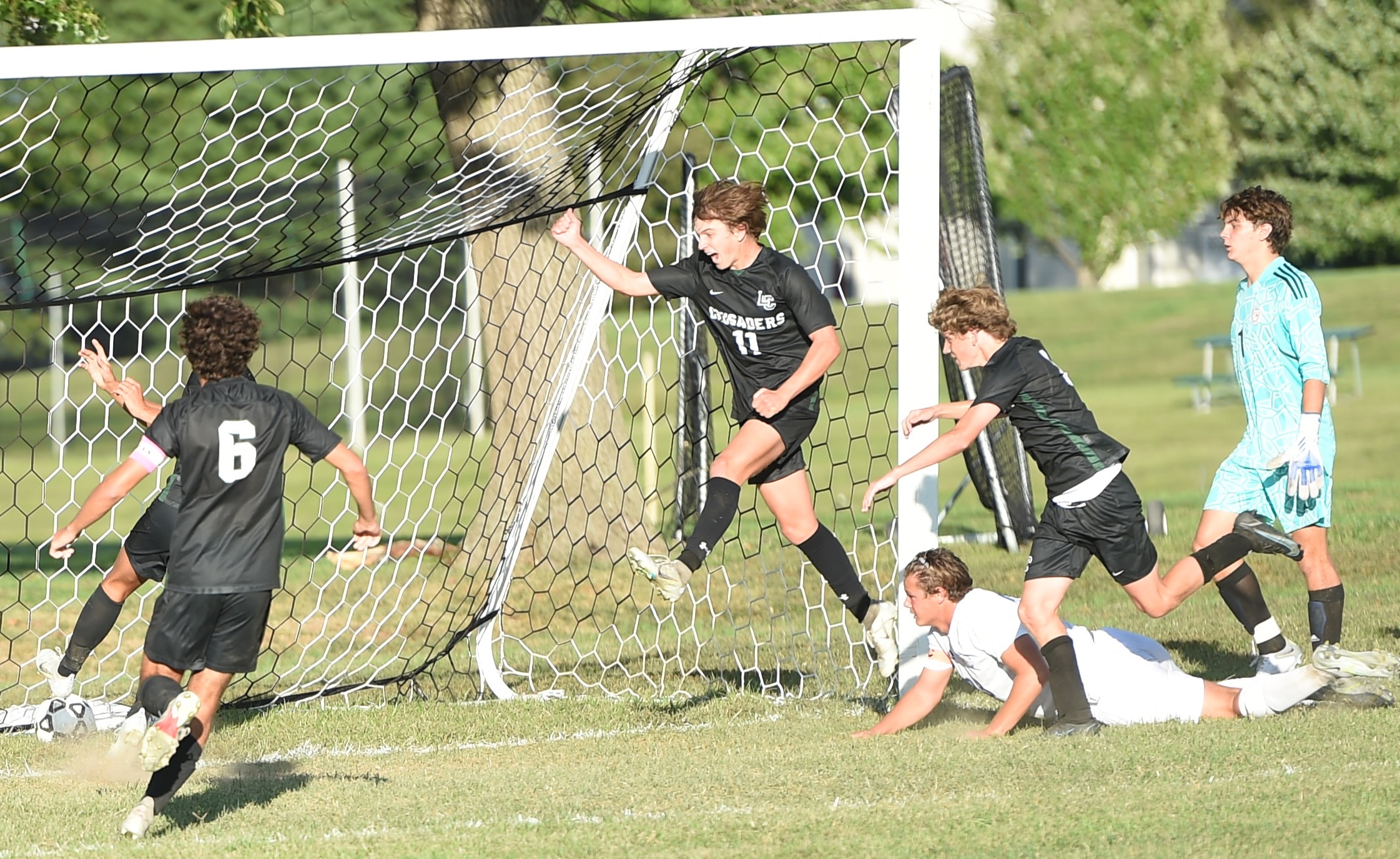 Lansdale Catholic's Patrick Cole (11) leaps into the air to celebate Gianluca D'Alterio's goal in the second overtime to give LC a 3-2 win over Conwell-Egan on Tuesday, Sept. 20, 2022. (Mike Cabrey/MediaNews Group)

It took until the second overtime but the Crusaders finally executed the strategy to claim a key Philadelphia Catholic League victory over the Eagles.

Tommy Ellis’ diagonal long ball to the right side was chased down by Patrick Cole, who made a run into the 18-yard box and from near the end line sent a ball towards the front of the net. Gianluca D’Alterio was in the perfect spot to touch it over the goal line, giving Lansdale Catholic a 3-2 double overtime win.

D’Alterio had a hand in all three LC goals, scoring in the first half to tie the game 1-1 before his free kick was headed in by Ellis to put the Crusaders up 2-1 in the second half.

“Just being in the right spots, doing the right thing,” D’Alterio said.

But a handball call in the box allowed Conwell-Egan to knot things once more as Dylan Kopenits’ stepped up and converted a penalty kick for the second time in the game to make it 2-2, which is how things finished after 80 minutes of play.

“We just had to keep matching their intensity and getting more of it from our end,” Farrell said. “So that’s really what this was all about cause they were never going to let up. It was never going to be an easy win today no matter what.”

In the second extra session, Lansdale Catholic twice put balls on net but both went directly to Egan goalie Anthony Conrey. D’Alterio, however, finally knocked in the winning tally after Cole drove towards the right post and found him with a pass through a crowd that included the keeper.

“We’ve been pushing him to kind of get himself involved,” said Farrell of D’Alterio. “He’s always been in the middle of the field his entire life, he’s always flying around in some way whether he gets it or not so we’re really trying to push him to be, ‘Once you get to attacking third, man, it’s got to be in the back of the net or at least a threat.’

“Early on in the season and if he’s got a hand in three out of the three goals today, hopefully it just gets better and better as the season goes on.”

The Crusaders came into the week on a two-game skid after dropping league matches to La Salle (5-0 last Tuesday) and Archbishop Wood (2-0 last Saturday). In edging Conwell-Egan (3-3-1, 1-2-1), Lansdale Catholic not only stops its losing streak but also boosts its chances in the PCL’s four-team District 12 Class 2A race.

“I thought we played fine last week,” Ellis said. “We just had to go score more goals this week so that’s it.”

“We felt that we played very, very well against Wood, there was no change basically in formation or lineup between Wood and now, little bit between La Salle and Wood,” Farrell said. “That was more of a reality check that game for us where Wood was just we lost to a good team in the PCL. So it’s a mental shift more than anything else and just have some confidence in ourselves.”

The Eagles took a 1-0 lead in the opening half after the Crusaders were called for a foul in the box, giving Kopenits his first try from the PK spot, which the sophomore sent into the lower left corner.

BOYS #SOCCER: 1H Conwell-Egan 1, @LCCrusaders 0. Dylan Kopenits coverts a PK after getting fouled at m a run in the box. pic.twitter.com/NB8TVTPRZ0

LC leveled the game before half as Chase Anderson got free on the right side and delivered a through ball to D’Alterio, who put his shot inside the right post.

“Chase got by him, I was in the right spot just had to tap it in,” D’Alterio said.

The Crusaders thought they had a penalty kick when D’Alterio going down in the box drew a whistle but ultimately the officials opted to waive off the PK.

LC, however, grabbed a 2-1 lead on a free kick. D’Alterio lofted a ball into the box with Ellis getting his head on it in front of the goalie and sending it into the net.

“I beat my guy and then I was just trying to flick the ball over the keeper,” Ellis said. “Just try to score, put our team up one goal.”

Conwell-Egan answered on another penalty, awarded after a handball on the left side of the box. Kopenits stepped up to the spot for the second time and drilled a shot into the top right corner to pull the Eagles even 2-2.

“It was the edge of the box – was it in, was it not I’m not sure,” Farrell said. “That’s what he calls, that’s what he calls but it’s just one of those things where there’s only two of them so credit to them for being where they are. But there was a few all over the field that we just felt like we deserved a couple calls or whatever it is.

“But you know what, at a certain point we made a lot of mistakes that shouldn’t matter what the refs are up to so I think once we kind of realized ‘Hey, let’s do this ourselves and keep working hard and we’ll get there.’”

Conwell-Egan put a header on net late in the first overtime but it went right to LC goalie Danny Shelak.

In the second OT, the Crusaders’ Matthew Schaefer got off a shot in traffic in front of the net but it lofted into the arms of Conrey. A header by Ellis was saved by Conrey before D’Alterio scored his second off Cole’s cross.