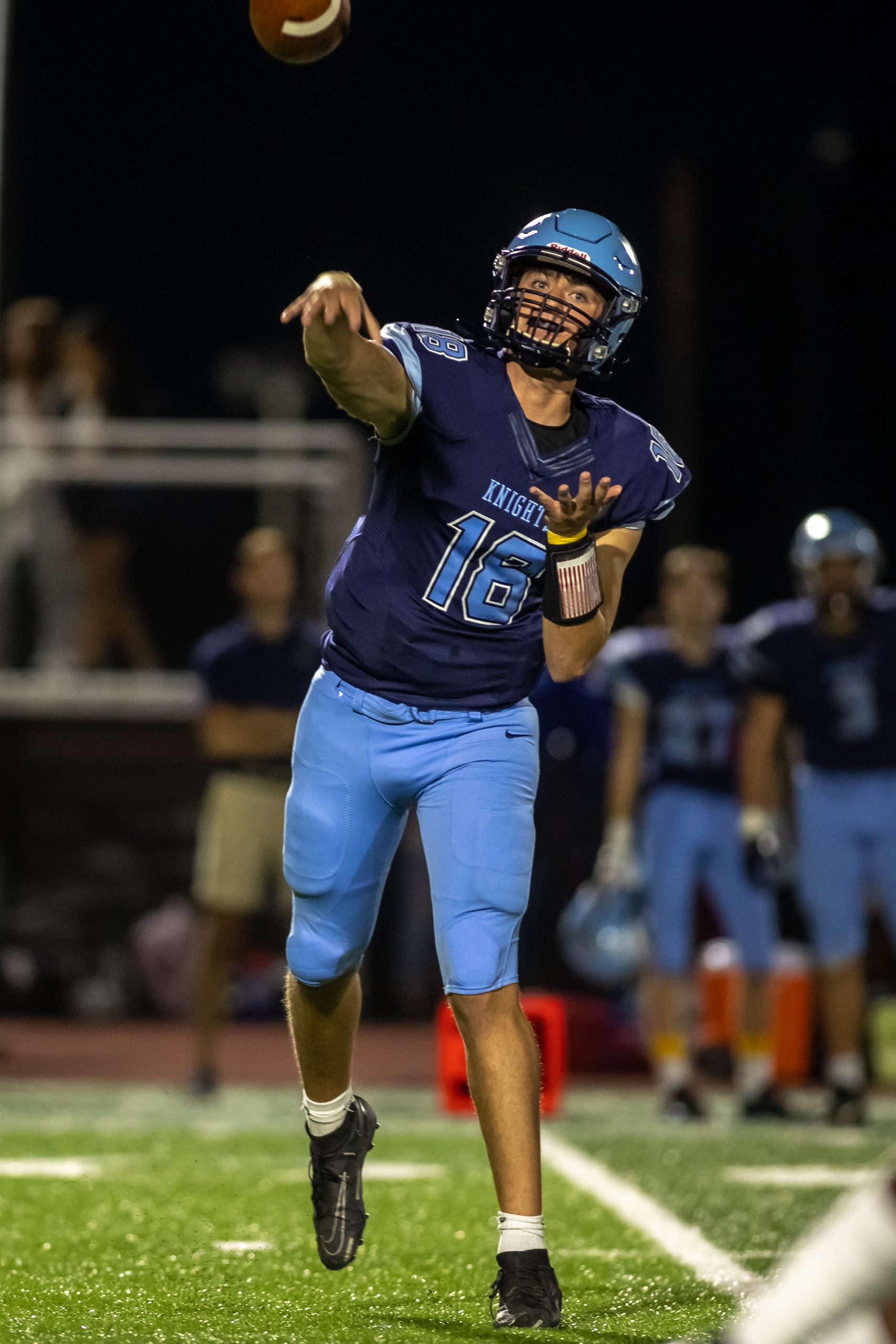 “I give props to Neshaminy — they played a great game,” said Zeltt, who threw four touchdown passes, including the game winner in OT. “I’m super happy we won.”

The Skins came back from deficits of 21-7 and 28-21 to force the extra session, but Zeltt and the Knights would not be denied in their Suburban One League National Conference opener.

On the very first play of overtime, Zeltt threw a 10-yard out to Mario Sgro for the touchdown and — with Ryan Bocklet’s extra point — the Knights led 35-28.

The North Penn defense pushed the resurgent Skins back to the 16 on their possession and then forced an incompletion on fourth down to lock up the victory. North Penn huddles during the fourth quarter of its contest with Neshaminy (Kev Hunter/MediaNews Group).

Said the 6-foot-4 Zeltt of his many targets on the evening: “I trust every single one of them.”

Including Sgro, Zeltt’s buddy and teammate on the basketball court.

“It’s his first year playing high school football,” Zeltt said. “He comes out and makes one of the biggest catches ever. He’s a speedster, he’s aggressive, he’s a tackler and I’m so happy he came out.”

It looked like Zeltt landed the knockout punch when he delivered a 61-yard strike to Rashad McNeil that gave NP a 28-21 lead with just 4 minutes, 26 seconds to play.

On 4th-and-16 at their own 32, Colin Baker connected with Ashton Lovelack for a 53-yard gain down the left sideline, setting up the tying score. Baker threw to tight end Joey Zack for the 14-yard touchdown that forced overtime.

“I just thought Neshaminy played so hard tonight,” Knights coach Dick Beck said. “It’s good to be 1-0 in the conference. That’s huge for us.” North Penn survived some injuries to their offensive line and receiving corps to pull out the win. The defense blanked the Skins in the second and third quarters but Neshaminy got hot in the fourth.

“I thought (the defense) played much better in the second half but every time we would get them in a 3rd-and-long or a 4th-and-long, (Baker) would make a nice throw and we gave up a long pass. That was tough,” Beck said.

The passing attack proved to be that much more vital for the Knights. Rashad McNeil caught four passes for 125 yards and Xavier Bryan made five grabs for 58.

“We had people step up,” Zeltt said. “I can’t wait to go in the locker room and give every single one of them props.”

Neshaminy received the opening kickoff and marched 88 yards to a score, chewing up almost the entire first-quarter clock.

The 18-play drive was a mix of runs by Markus Barnett (182 yards) and timely passes by Baker, who was 3-for-3 on the opening series.

Barnett had 68 yards rushing on the drive and fittingly capped it off with a four-yard TD run, putting the Skins up 7-0 on this cool evening at Crawford Stadium.

Neshaminy would own an 18-3 edge in plays from scrimmage in the opening quarter. The Knights got going on their second possession of the second quarter.

Zeltt began to find his many receivers, hitting Sgro and Michai Cuffie for key pick-ups.

Cuffie dashed into the end zone on a nine-yard run, bringing the Knights within 7-6. Neshaminy blocked the extra point to cling to its one-point lead.

But it wouldn’t last. North Penn (2-2) scored again on its next series, moving the ball 69 yards in just five plays.

The key moment came on a 46-yard strike over the middle from Zeltt to McNeil, moving the Knights in position.

Zeltt found McNeil for an 11-yard score and then Zeltt threw to Bryan for the two-point conversion, giving NP a 14-7 lead at the break.

The Knights made it 21-7 in the third when Zeltt — off play action — connected with Bobby Hill for a 21-yard touchdown.

The Skins drew even in the fourth with a one-yard sneak by Baker and a three-yard burst by Barnett, setting up the big finish for North Penn. Boyertown bursts by Pottsgrove with second shutout of year, 33-0
Malvern Prep’s defense rises to the occasion to defeat Imhotep