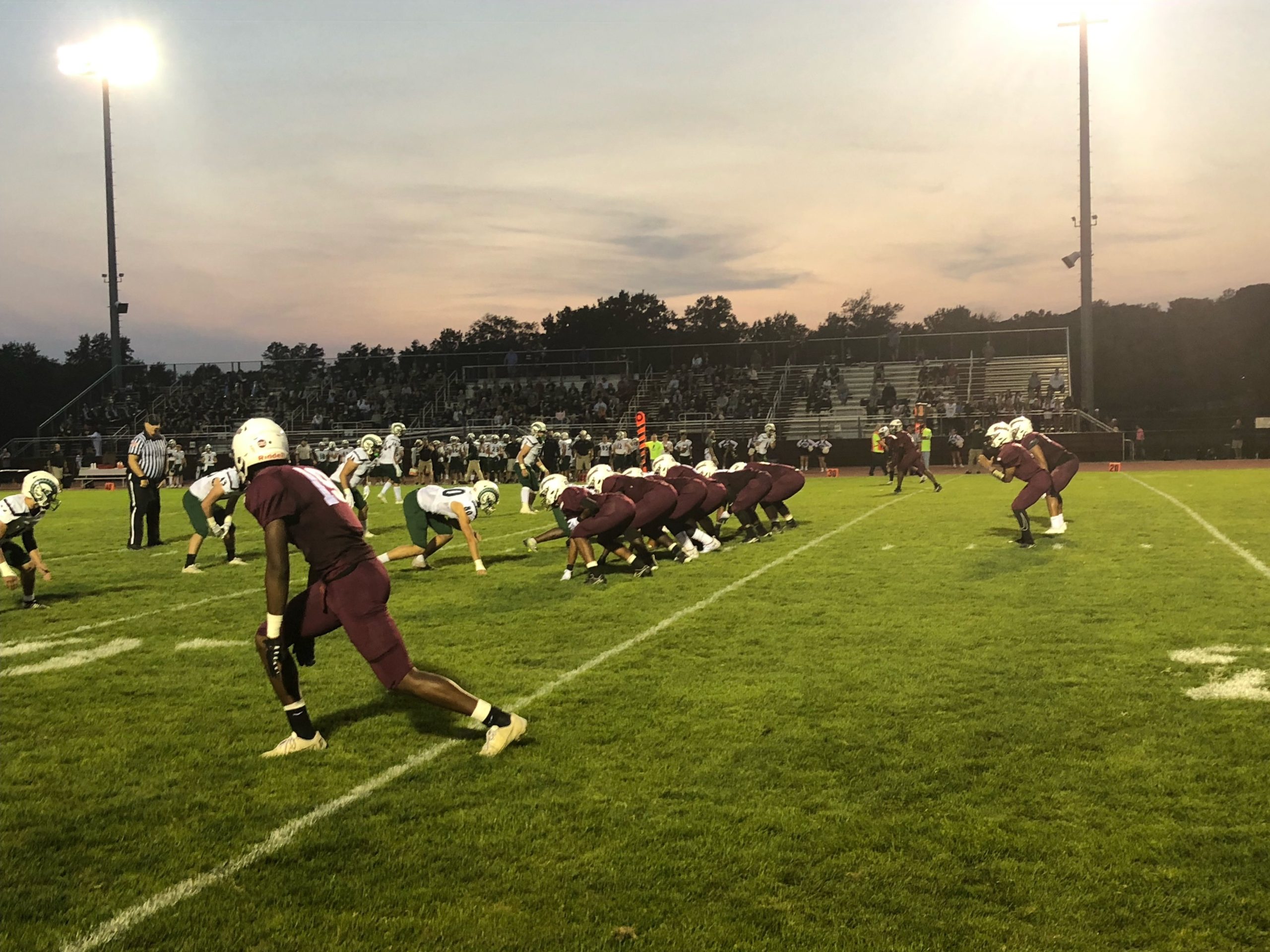 ABINGTON >> It’s always a good night when the defense scores more points than it allows.

It’s even better when the night ends with back-to-back shutouts, a bushel of turnovers to go with a few scores and a win to open league play. Right now, with an eight-plus scoreless quarter streak to its name, the Pennridge defense is having some good nights as the Rams seem to be finding their stride.

Powered by two touchdowns from the defense, Pennridge opened SOL play with a 34-0 win over Abington on Friday.

“Everybody just did their jobs,” Trevor Fuhs, who scored one of the defensive TDs, said. “We played well as an entire defense.” The final score won’t say it, but Friday’s SOL National opener was a defensive battle. Abington’s defensive unit didn’t have the scores or turnovers but the Ghosts, who spent a lot of time on the field trying to get Pennridge’s offense off of it, more than held their own.

What the Ghosts couldn’t overcome however, was the turnovers. From a muffed punt that gave Pennridge a short field on its first score to the two lost fumbles and the pair of interceptions, any gains Abington had offensively were all but negated by giving the ball back to the visitors.

“Turnovers, bad field position, everything that could have gone wrong, did,” Abington coach Kevin Conlin said. “Our defense played exceptional against a really good offensive team and a really good running back. (Pennridge) had a lot of yards but the defense was on the field the whole game, it’s a tribute to them.”

Abington’s defense, which was led by standout efforts from Alton Bullock, Jamie Rivera, Nehemiah Shine and Connor Prenderghest, stopped Pennridge on the Rams’ opening drive but the victory was short-lived. The Ghosts fumbled the punt, with Pennridge’s Chase Marshall recovering and three plays later, Tyler Wetzel was in the endzone on a nine-yard run.

From there, it was Pennridge’s defense taking control of the game. Not to be lost in the Rams’ resurgence the last two weeks has been the return of senior linebacker Dylan O’Brien, who made his presence felt early by blowing up a 4th-and-1 run for no gain, turning the Ghosts over on downs at the Rams’ 30.

One play and 70 yards later, it was Nate Mossbrook running into the endzone. Mossbrook, the speedster senior wide receiver, scored twice in the game but even he acknowledged the defense was the star of the night.

“Our defense was a game-changer,” Mossbrook said. “I’ve seen a different edge to them. After our first two games, our team was kind of down and coach (Chuck) Burgy brought us all in, we had a big talk and everyone’s been stepping up since then.”

The Rams’ defenders were just active all game and that activity led to both defensive scores. As Abington was driving deep into Pennridge territory again, Ryan Kirkwood used all of his listed 6-foot-3 frame to deflect a pass at the line of scrimmage, which fell to Fuhs and the sophomore was happy to take it back 84 yards for a pick-six.

“Every guy out there just does their job and we play team defense, that’s what makes us Pennridge football,” Fuhs said. “It’s going real good now, we needed to come back from that 0-2 start.”

In a credit to Abington’s defense, the Ghosts held Pennridge scoreless in the second quarter and the Rams on downs twice, including a terrific pass break-up by Bullock in the endzone on a fourth down play. Unfortunately for the hosts, who also got a blocked field goal from the defense in the third quarter, the turnovers continued to be an issue after halftime.

“It’s a tough league and every team you play is tough. I don’t know if we were ready for that,” Conlin said.

Rams defenders swarmed the ball all game and in the third, it resulted in another fumble that hard-hitting junior Jack Walker scooped up and returned 43 yards for the defense’s second score of the night.

Mossbrook had the big run, which he attributed completely to the blocking of his linemen up front but for the most part, the Rams offense was denied the big plays that it usually breaks once or twice a game. What the offense, led by a hard-earned 119 yards on the ground by Brennan Fisher did do was keep the Ghosts defense on the field and it was Mossbrook’s 10-yard run that put the game to bed late in the fourth.

“The linemen, they’re the game-changers, man,” Mossbrook said. “Just follow the big boys up front. We kept pounding, we were there, the mindset was there, the heart was there. We needed it.” Next week, a duel with undefeated CB East awaits and the Rams defense will face its stiffest test yet.

Sam Kuhns added an interception for Pennridge in the third quarter for the fifth takeaway of the game by the Rams’ defense. With an influx of juniors and sophomores permeating into the defense and, like they did Friday, getting things done, the seniors on that side of the ball have brought the unit together.

“They taught us a lot of discipline,” Walker said. “Work hard, don’t give up or tap out, keep going and if you pick each other up, that’s when you start making plays.”