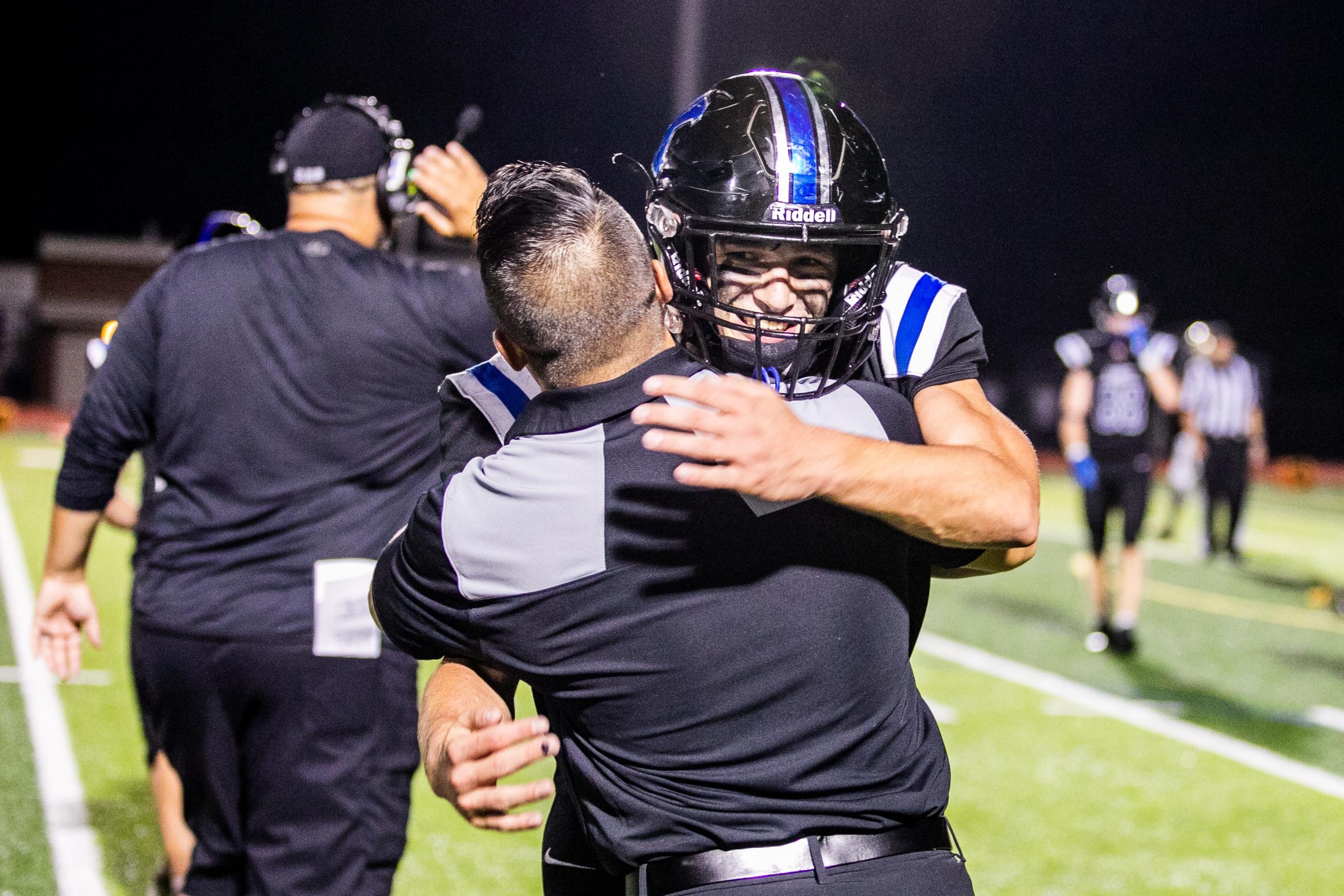 But after a busy week on hudl, studying film, Guyer recognized West Chester Rustin’s formation on a first and 10 with two minutes, 19 seconds remaining. When the wide receiver tucked back in for a tunnel screen, Guyer jumped the route, picked off David McClain’s pass and sprinted 33 yards for the clinching score.

It was not a prototypical win by the Blue Demons, but it was a gutsy one, as they used clutch defense and elite special teams to knock off Rustin, 24-14, to take the driver’s seat in the Ches-Mont American Division title race.

“I watched the film this week and every time they ran that play it was from the same formation,” Guyer said. “I read it, saw the guy going in and jumped in front of it.”

Kennett (3-0 division, 3-1 overall) ran just 32 offensive plays, totaling 84 yards and three first downs, but outscored Rustin (2-1, 2-1) 21-0 in the second half for its second win over the Blue Demons in program history.

The Blue Demons’ three possessions in the third quarter started at the Rustin 30, 12 and 48-yard lines. Julian Sparacino set Kennett up with a big kick return to open the third and followed it with a 20-yard run to set up a first-and-goal at the 10.

On third down, a pass sailed high, but Rustin’s Daimon Jacobs was called for a personal foul penalty for his hit on the receiver, and Sparacino scored the next play, to make it, 14-10.

“I thought we made a great play on the ball but the refs didn’t see it that way,” Rustin coach Mike St. Clair said. “That was a game-changer.”

On the Golden Knights’ next possession, their punter caught a low snap with his knee on the ground, setting up a five-yard touchdown run by Brett Kauffman three plays later, to give Kennett its first lead.

Sparacino led Kennett with 65 yards, but Rustin’s defense was up to the task, holding on as injuries piled up.

On Rustin’s second drive of the game, Chase Hatton broke a 49-yard run, but Kennett’s Jackie Good dove to tackle him at the two. Jacobs scored two plays later to give the Knights a 14-0 lead, but Hatton would leave the game with an injury from the tackle.

After accumulating 170 yards on its first two drives, Rustin managed only 97 the rest of the way with Hatton out.

“The last two weeks we’ve lost a lot of good players and we’ve had to put in a lot of inexperienced kids in,” St. Clair said. “Going up against a very good and very physical team, our kids did the best they could.”

Kennett’s Ryan Barker showed why he’s a Penn State recruit, going five-for-five with touchbacks on his kickoffs, booming a 45-yard field goal at the end of the second quarter, and his six punts gave Rustin an average starting field position of its own 20 yard line.

Barker’s second to last punt gave Rustin the ball at its 19 with a little over 10 minutes to go, and the Knights moved all the way to the Kennett 20. But on a fourth-and-three, McClain was stopped a yard short with 4:11 remaining.

“This means everything,” said Guyer, who had two interceptions. “I’ve been working for this all my life. It’s what I always wanted to do.”

Rustin forced a three-and-out, but its first play on the ensuing possession ended with Guyer sending the home crowd into a frenzy.

“We were expecting a screen, but not that screen,” Frazier said. “Ian Guy is a high IQ kid, and he’s just a sophomore, but he watched the film and made that play and the way this team is built, we have to do those extra things, to be extra special.”