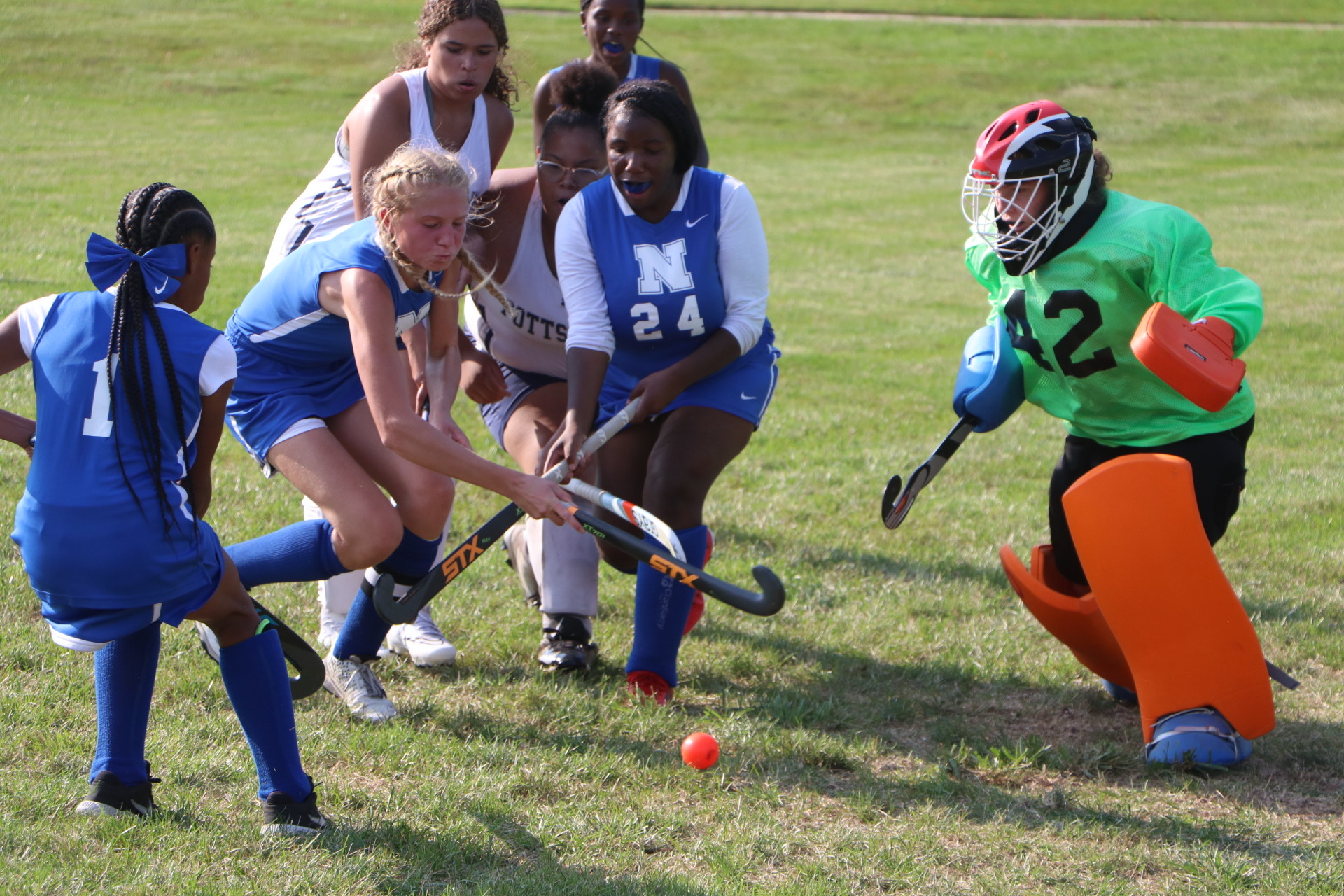 Norristown’s Alex Carpenter scores the game-winning goal in the second half against Pottstown in a field hockey game on Wednesday. (Evan Wheaton - MediaNews Group)

POTTSTOWN >> After a year off from competition, the Pottstown field hockey team is back and trying to improve day by day. Norristown is in much the same boat, having played short-handed last season and with only two returning players.

Those two young and inexperienced teams met on Wednesday afternoon, with visiting Norristown winning 1-0 in the Pioneer Athletic Conference crossover game on a late goal by Alexandra Carpenter.

Taetum Robbins made 10 saves in goal for the Trojans (0-4 PAC, 0-5 overall). Alana Echevarria assisted on the goal with six minutes remaining in the match and the Eagles (1-3, 2-4) had an 8-0 advantage in penalty corners. Pottstown did not play any games last year because of a lack of players, though those who were interested continued to practice and the Trojans have been actively recruiting players the whole time.

“It was definitely disappointing, not getting to play last year,” said Pottstown senior defender Daishawnia Dean. “And the seniors didn’t get a sendoff. It feels like old times. At first, it felt out of place.”

“We talk a lot about each day, what are we going to do to get better,” said Trojan coach Brandy Scherer. “We’re learning different pieces of the game. We just have to put it together.”

Norristown controlled the ball deep in Trojan territory for much of the first half, but Robbins – who had never been a goalkeeper before this season – came up with several saves during a scrum in front of the cage in the second quarter.

She and Dean have both also played lacrosse, so Scherer was confident that Robbins could make the switch from a field player to a goalie.

“We needed to fill the gap,” said the Pottstown coach. “And having played other sports, we knew she could pick it up.” The Trojans are trying to get up to full strength in future seasons by working with the middle school program.

“We’re connecting with the middle school and trying to build up the program there,” said Scherer.

Meanwhile, Dean is trying to help her young team learn the game.

“You feel the pressure,” she said. “I can’t get frustrated. You have to be enthusiastic. I’m glad we’re moving as a team, as far as learning.”

“They’re learning to put their sticks down, getting better moving the ball,” said Robbins.

The Eagles are also learning as a team, led by senior captains Carpenter and Echevarria.

The Eagles did not win any games last year, but began this season with a win over Upper Darby.

“It’s good to have these wins,” said Carpenter. “They give us a step up in confidence.”

“We’re just kind of building from the bottom,” said Norristown coach Rachel Shuster. “I have a lot of freshmen and people who have never played before. We’ve had some frustrating times. This is our second win of the season. It gives them a positive attitude. It’s a good group. They can only grow from here.” Pottstown and Norristown field hockey players line up and high-five following a 1-0 win for the Eagles on Wednesday. (Evan Wheaton – MediaNews Group)