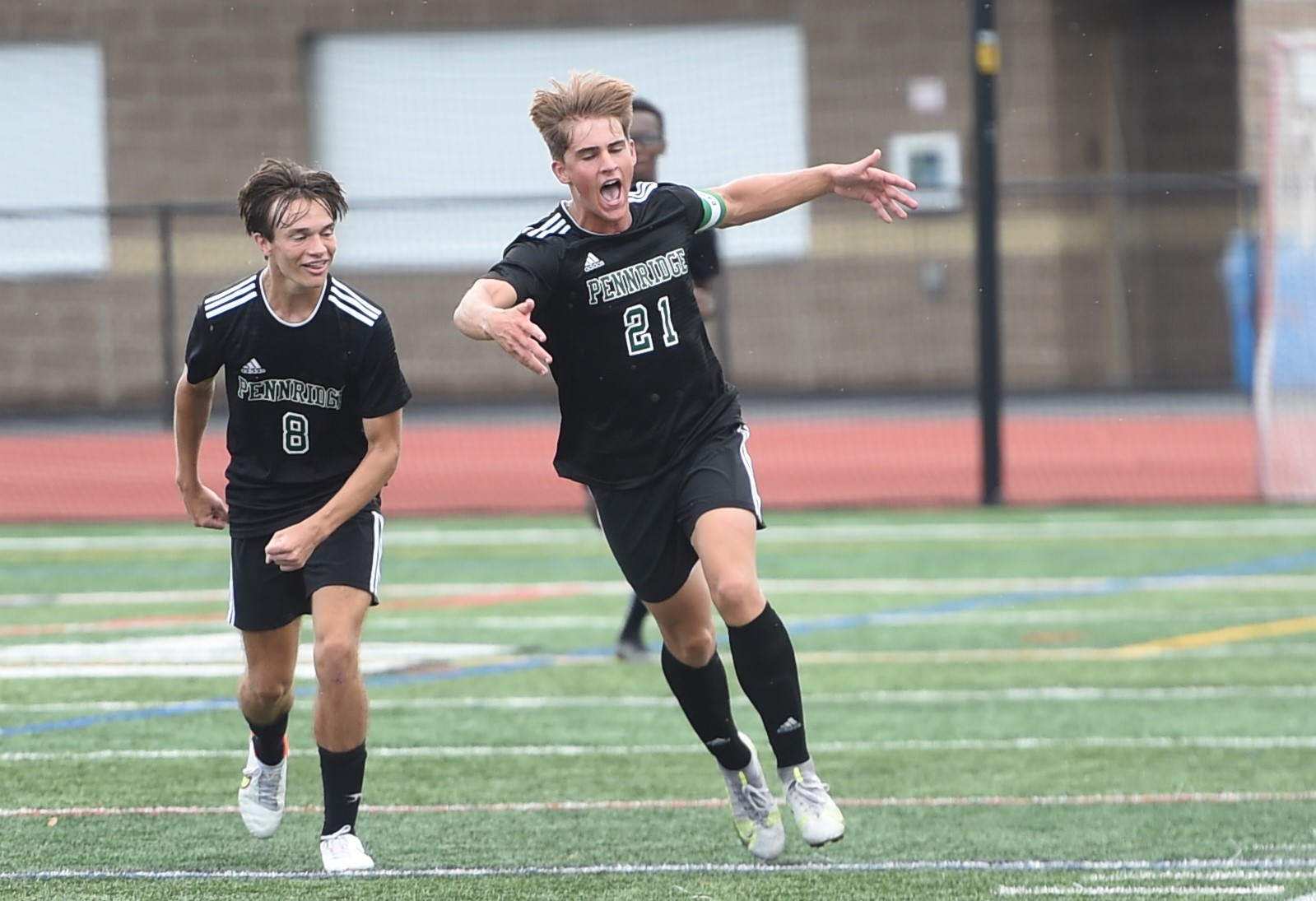 Pennridge's Jared Hess (21) celebrates after his goal in the second half against Central Bucks South on Monday, Sept. 12, 2022. (Mike Cabrey/MediaNews Group)

“We all knew where he was going,” Pennridge boys soccer’s senior goalkeeper said. “Everyone was guessing it so I went there and saved it.”

With the Rams up 1-0, a foul in the 18-yard box gave the visiting Titans an opportunity to pull level at 32:18 in the second half of the Suburban One League Colonial Division contest.

O’Hara sent his PK towards the lower right corner but Dimmick dove in the same direction, blocking the shot with his legs to maintain Pennridge’s advantage.

A little more than two minutes of game time later, Dimmick’s denial paid off as Jared Hess blasted a ball into the South to double the lead.

“Right as CJ saved the PK, all their team kind of hung their heads and we had to counter,” Hess said. “And that’s just how it happened.”

Hess’ strike was his second Monday afternoon, his first in the opening half off a long ball from Dimmick. Shane Velez added a goal right at the end of regulation as Pennridge snapped a two-game skid by shutting out the Titans for a 3-0 victory at Helman Field. “CB South has had a great start, they got a really good forward and we know (Sean) Rieber from club and just a solid team all around,” Rams coach Pete Valimont said. “So for us to come out here and put that result and bounce back the way we did and make some changes on our end with moving some people around it’s a great positive for us. And it’s a true testament to our guys being able to make changes on the fly and listen and do what they’re told and come out with a great result.”

“After our first loss, it wasn’t even a great loss, we didn’t even do much, we lost 3-0, we kind of gave up,” Hess said. “And then we went into West expecting a good game but we expected to win and obviously right off the start they scored against us and we kind of hung our heads.

“And we didn’t have any practices between that game and this game and I know we were changing formations so I wasn’t sure how’d it kind of go today. But I just knew that we had to put our hearts out on the field and we got the job done today.”

BOYS #SOCCER: CB South gets a penalty kick at 32:18 2H but @PennridgeSports goalie CJ Dimmick makes the save. pic.twitter.com/z2VGybigck

CB South (4-2-0, 3-2-0), meanwhile, came into Monday on a two-game winning streak – topping CB West and North Penn – but could not figure out a way to get a ball past Dimmick while Hess broke a scoreless tie at 13:58 in the first half then tallied his second at 30:16 in the second.

“Hess, he’s just a stud,” Valimont said. “He’s just big and strong. I had him in middle school and what he’s done to his body over the past three, four years, to physically get bigger and stronger. Don’t forget he’s the defending indoor state champion for triple jump. He can run, he can jump and when he’s on finishing and he’s feeling it, he’s a heck of a forward and a heck of a finisher.”

The result has Pennridge and Central Bucks South tied for second place in the Colonial on nine points, three back of leader CB East. Both the Rams and Titans began crossover games against the SOL Patriot Division – contests that count towards the Colonial standings.

“We just got to do our best in these crossover games now,” Valimont said. “That’s our focus and then when we come back around we don’t need to scout, we obviously know each other. Take care of business but really take care of business on the road, we do a great job at home we just need to flip the switch when we get on the road.” Along with the PK save after the break, Dimmick collected the assist on Hess’ first goal, clearing a ball that Hess chased then before getting behind the South defense and rolling a shot into the lower right corner.

“CJ’s punts it’s a dime right on my head and I know I can just turn around, start going and it’ll go right next to me,” Hess said. “And to be honest I kind of fluked the kick but it had the right intentions and it went right bottom.”

The Titans’ penalty kick came after Dimmick jumped up to make a save at the left post but the ball stayed in a box and a South player was tripped up, the foul drawing a whistle to give South an opportunity to knot the score at one apiece.

“He was first-team (All-SOL Colonial) goalie last year and I believe as of right now going through the first time I don’t think there’s any doubt that he’s head and shoulders the first-team goalie right now with how he’s played,” said Valimont of Dimmick. “I know last week we gave up six but those could’ve been four-or-five-goal games if he didn’t make some of the saves that he made.

“And today just was a testament to him, a fantastic transition ball for an assist and a couple point-blank saves and a hell of a save on the PK.” Hess proceeded to make it 2-0 just 2:02 later off an assist from Ayoob Herzi – Hess getting space in the middle of the field then ripping a shot into the net’s right side.

“They just sent me the ball and I tried to take my time a little bit cause I tend to rush,” Hess said. “And I saw the lane inside the middle and I took the shot.”

A blocked Dimmer clearance gave South’s Owen Tyson a chance on goal but Dimmick got a hand out to make the save. A diving stop by Dimmick shortly after kept Pennridge up two.

“I guess he was a little off guard cause everyone said he was offsides,” said Dimmick of his save on Tyson’s shot. “And then he just kicked it and I was there.”

The Rams tacked on their third goal with just one second left as Velez headed in a free kick sent into the 18-yard box by Patrick Fannon.