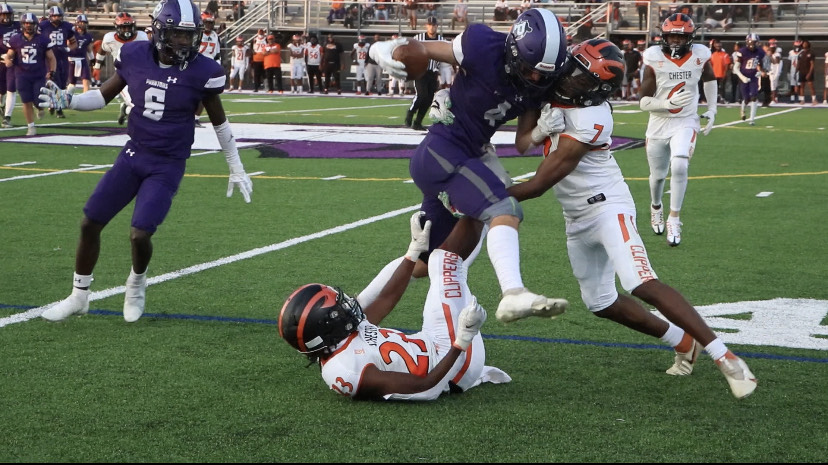 PHOENIXVILLE >> Chester’s football team was in a brief, unfamiliar position.

Having outscored teams 112-0 entering their Week 3 matchup against Phoenixville, the Clippers found themselves not only down for the first time, but trading blows in the first half.

But after trailing 10-8 in the second quarter, Chester unloaded 39 unanswered points en route to a 47-10 win over the Phantoms at Washington Field on Friday.

“I felt as though we had to really warm up more than anything,” senior linebacker LaFenis Mays Jr. said. “We didn’t know what they were calling at first. We were watching film, they were running something different from film, but we slowly caught on. Then we turned the heat up, came back and took over.”

Mays Jr. picked off Phoenixville (1-2) quarterback Talon Romance for a 27-yard return for a touchdown and added a sack. Kesean Chambers also made an interception for the Clippers.

Once Chester’s offense found its footing, freshman quarterback Jalen Harris turned it into an all-out aerial assault. The 6-foot-1, 154-pound first-year signal caller threw 13-for-18 with 206 yards and five touchdowns.

Two of them came on one-snap drives — a 74-yard go-ahead run to the house and a 48-yard bomb — both to senior wide receiver Cymeer Brown. Brown hauled in 147 yards on just five catches with his two scores.

“Practice. That’s all it takes. Practice,” Brown said. “We bring it to the field, we practice how we play. We do it all week, do it hard, practice hard and compete. All we do is compete.”

After an interception, another one-snap TD. Harris throws a 48-yard bomb to Brown. Two-point conversion good.

Chester (3-0) trailed for the first time this season when Darius Watson punched in a 2-yard run to go up 7-0 with 39 seconds left in the first quarter.

The Phantoms’ opening drive resulted in a turnover on downs, but it showed promise with five straight handoffs and a 15-yard connection from Romance to Hayden Tenbroeck for three first downs.

A two-point conversion following a 21-yard strike from Harris to Aqeel Austin gave the Clippers their initial lead in the second quarter before a 32-yard field goal from Micheal Sposato reclaimed a 10-8 lead for the Phantoms.

“We followed the script. We had a game plan and we followed it,” Phoenixville coach Anthony Ciarlello said. “Then we hit a few bumps and some adversity. All of a sudden we got a little shook. We took a right hook and didn’t come back from it.”

After five straight handoffs, Talon Romance connects with Hayden Tenbroeck on a 15-yard strike for Phoenixville’s third first down on its opening drive. pic.twitter.com/VgrVWIebhT

Having held defending District 1 Class 4A champ Bishop Shanahan to one score with seven forced turnovers last week, the Phantoms’ defense was once again contending with another powerhouse for the time being before the Clippers ripped the carpet out from under them.

Junior receiver Dominic Toy (five receptions, 53 yards) made the most of his end zone targets, making a 6-yard catch and 7-yard reception in the third and fourth quarters, respectively. Both his scores came in the back corners of the planes.

“We knew our receivers were better than their DBs and we just trusted them,” Harris said. “Left it up to them to go make a play.”

Noble Thompson (six rushes, 71 yards) added a rushing touchdown to put Chester up a commanding 35-10 heading into the fourth quarter.

Coming off a promising defensive performance, Phoenixville received a Clippers roster that’s as solid in all three phases of the game as advertised. The 10 points are what two other teams couldn’t do yet, and the game was a decent measuring stick.

“We scheduled this in the spring because we had to test who we were,” Ciarlello said. “We knew they were gonna be tough, we knew it was an opponent who was gonna help us test our mettle and show us who we were. Now we have to rise up again like Phantoms do.”