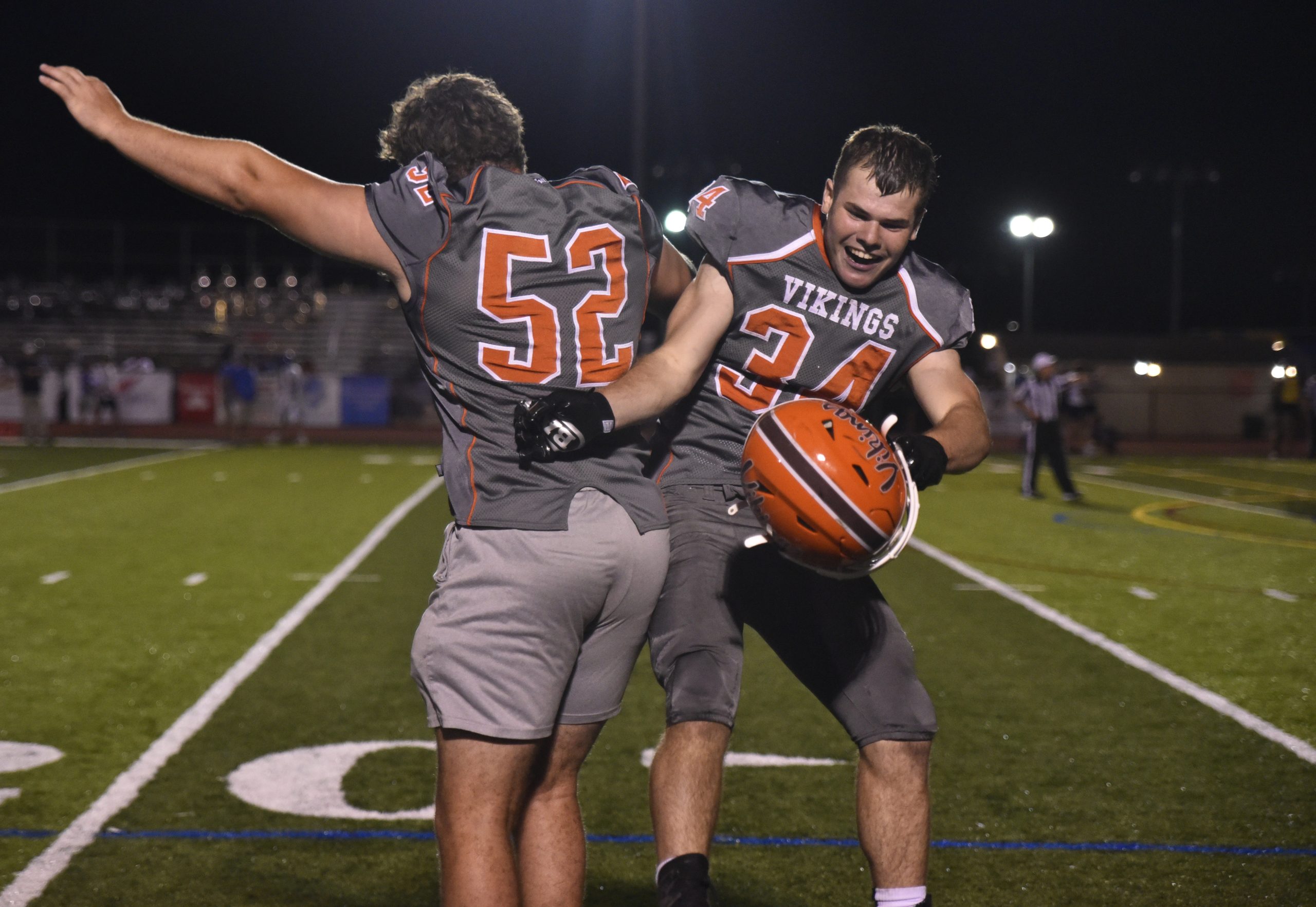 GRATERFORD >> Early into his first season starting in the Perkiomen Valley backfield, one thing is certain about Jacob Stewart: He never gives up on a play.

Surrounded by two, three, four defenders, Stewart’s legs keep churning and his eyes stay up looking for more yards to give his team.

After his team trailed by two scores heading into the second half of Friday night’s game against Downingtown West, the running back’s bruising play helped spearhead a 30-29 comeback win for Perk Valley.

Stewart totaled 152 yards (90 rushing, 62 receiving) and three touchdowns — all three in the second half. His 27-yard touchdown catch from senior quarterback Danny Koehler and the ensuing extra point from senior Ryan Klimek with 11:19 to play proved the difference in overcoming a 26-10 halftime deficit.

“Coach (Jason) Basile gave a great speech about how we’re not going to give up, and I don’t think anyone gave up,” Stewart said. “We all just gave everything we had into that last half and did everything we could to win.”

With starting quarterback Quinn Henicle sidelined, sophomore Tommy Miller gave the Whippets (1-1) a chance, getting them out to a big lead over the Vikings (2-0).

He completed 11-of-17 passes for yards and a touchdown and also ran for a score. Classmate Spencer Dunn helped him take some of the weight off his shoulders with 88 yards and two scores out of the backfield.

Vikings senior quarterback Danny Koehler (15-of-22 178 yards, 3 TDs, INT) made just enough plays with his arm and his legs to win the shootout.
“He was tremendous. He played his heart out,” Downingtown West coach Mike Milano said of Miller. “We weren’t sure what to expect, but I don’t think we could have got anything else from him. He was awesome.”

Downingtown West jumped out to a 7-0 lead with 7:04 left in the third quarter after a 1-yard sneak by Miller. The touchdown was set up after sophomore Darian Smith recovered a muffed punt.

A fumble of their own, which led to Klimek field goal, is the only thing that slowed the Whippets in the first half as they scored touchdowns on three of their first four drives and four of their six toal drives in the first 24 minutes.

Dunn put his team ahead 13-3 in the final seconds of the first quarter with a 5-yard touchdown run. Koehler found Klimek for an 8-yard score early in the second quarter, but Dunn broke free on the outside again to put West up 19-10.

Miller tossed a 14-yard touchdown pass to Dean Hange (three catches, 47 yards) with 36 seconds left in the first half to give his team a two-touchdown cushion at halftime.

At that point the PV defense did not look like it had many answers for how to stop the Whippets.

“We knew going into the second half it was going to be a battle,” PV junior linebacker Carson Pascoe said. “We were down points. We talked to the defense. We got ourselves together. We just had to go over our assignments. We knew we were confident. We knew we had the ability. We just had to go get it done, and we got it done. We believed in our teammates.”

Koehler tossed to Stewart for a 15-yard touchdown on the first drive of the second half to cut West’s lead to 26-17. Miller made some big throws to march the Whippets down the field in response, but the Vikings forced a 28-yard field goal with 3:52 left in the third quarter to stay in the game, trailing just 29-17. They were the last points West scored in the game.

A long return by Klimek followed by a 49-yard touchdown run by Stewart, on which he somehow emerged out of a pile of bodies, made it 29-23 West with 3:35 left in the third. He had a similar run against Penn Wood last week for a score.

The Vikings’ defense got the offense the ball back shortly after and Koehler dumped off to Stewart for the game-winning score with 11:19 to play.
A nice grab on third down by Michael Poruban (three catches, 44 yards) to end the third quarter was a key play on the game-winning touchdown drive.

“It feels good, but we’ve got more games ahead, so I’m going to focus on those,” Stewart said of his heroics.

“We don’t think anyone can stop us, so we learned a lot about ourselves that we’re not going to give up no matter who we’re playing and what the score is.”

Miller and Downingtown West had plenty of fights in them too.

He drove his team down to the 31-yard line in pursuit of a go-ahead score, but Perk Valley senior defensive lineman Vance Junker came up with a tackle for loss on third down and sophomore defensive back Dimitri Toman broke up a pass on fourth down to end the drive.

“That’s the deal, momentum,” Milano said. “They get rolling a little bit. The tempo changed. They went tempo and got us on our heels a little bit and they’ve got a really good football team. They really do. We had a chance. I’m not going to make excuses. We allowed that to happen at the end. We just didn’t do enough to win.”

The Cougars got the ball back two more times, the final time at their own 7-yard line with three seconds left but Junker, senior Shane Nelson and the rest of the PV pass rush helped alter the game, keeping Miller from mounting a comeback of his own.

“In the second half, they were getting tired so we took advantage of that as best as we could,” Junker said.

West lost several close games last season, including heartbreakers to Downingtown East and Coatesville. The hope is that an inability to finish off games doesn’t become a habit again as they look to improve from a 5-5 mark in 2021.

“We’ve gotta finish,” Milano said. “That was our motto coming into the year. We need to learn to finish. We had a couple heartbreakers last year, last-second plays against two archrivals and it’s been stuck in craw for a while. We’ve been talking about finishing and obviously we didn’t get it finished here tonight.”

On the opposite side of the field, the Vikings proved to themselves they’re never out of any game.

“Just going forward, that’s huge,” Pascoe said. “We know we can play with anybody and we know if we need to play four quarters we can play four quarters. We don’t get tired. We really pride ourselves on our conditioning. We work on it in practice, and we play as one unit. It’s not just one person. We rely on each other. If we all do our jobs, we’ll be just fine.”

NOTES >> Along with Koehler and Stewart, Perkiomen Valley coach Rob Heist lauded the play of do-it-all player Klimek and safety Stephen Ciaudelli, who had to step into a big role when the starter Ty Hall went down. He and Stewart also made sure to note the impressive play of the Vikings’ offensive and defensive lines, particularly in the second half. … PV celebrated its Autism Awareness & Inclusion Night on Friday, with fans and coaches wearing blue as part of the celebration. … Junior tight end Ryan Campbell was a safety valve for Miller, catching six passes for 53 yards. West junior Kameryn Alex added 58 yards on the ground, including a 43-yard run.