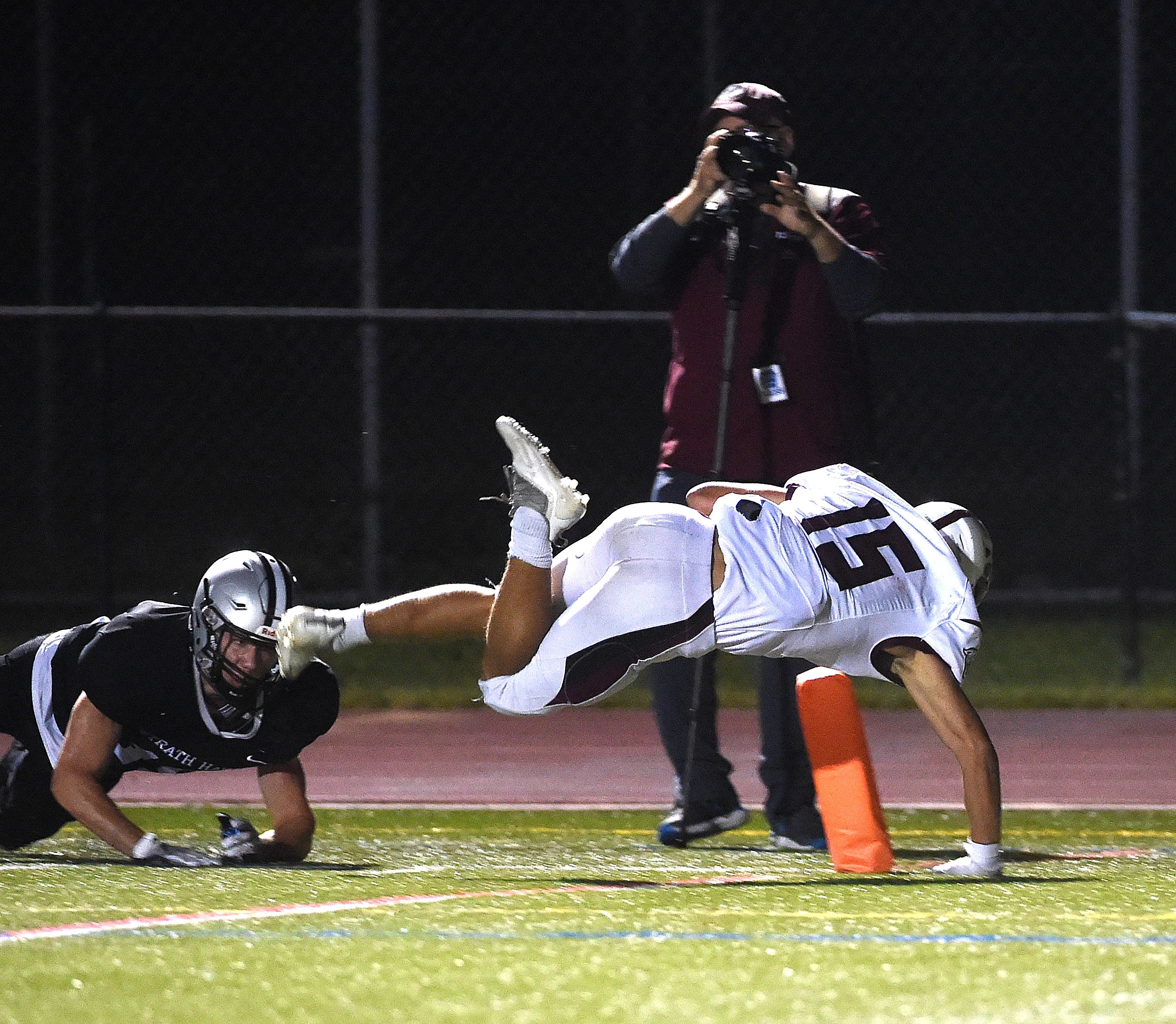 CONCORD — Jack Westburg scored four of Garnet Valley’s six touchdowns in the second quarter as the Jaguars cruised to a 55-20 victory over Upper Darby Friday.

Westburg, a senior running back, caught a pair of scoring passes from quarterback Matt Mesaros and ran for two TDs.

“Last week we didn’t play the way Garnet Valley football is played and this week we emphasized on every play to finish until the whistle is blown,” said Westburg, who rushed for a team-high 62 yards on six carries. “I think that is what helped us tonight.”

The Jaguars (2-0, 1-0 Central) exploded for 41 points in the second quarter. The surge in offense was a welcome sight after the Jags managed only 14 points in their season-opening victory over Central Bucks West.

“The way we competed on defense last week was excellent, but offensively we just didn’t see us finishing blocks and runs and that was the big key for us this week,” GV coach Eric Van Wyk said. “We knew we had to execute to our potential.”

Garnet scored 40 straight points after UD found the end zone on its opening drive via a QB keeper from Montez Ellis. Drew Van Horn hauled in a 36-yard pass from Mesaros for GV’s first TD. A safety put the Jags ahead 8-6, then Jason Bernard plunged across the goal line from a yard out on GV’s next drive to make it 14-6.

The offenses stole the show in the second quarter. By the end of the first half the Jags and Royals had combined for 597 yards of total. GV played the entire second half with its second and third units and a running clock.

“Compared to last week, we tried to finish the whole week,” said Van Horn, who had four catches for 73 yards. “Coach had us in practice going through the whistle and it really into the game, making the blocks downfield especially for Jack, with those four touchdowns he had. We’ll see on the film that hopefully everybody finished their blocks because I think that really helped us in the end.”

Van Horn caught another TD pass and Ronnie Leraris scored on a 20-yard run during the high-octane second quarter.

Mesaros was accurate through the air, completing 9 of 12 attempts for 175 yards. One of his three misses was a drop.

With Friday’s victory Garnet Valley extended its unbeaten streak in the Central League to 35 games. But the Jags’ dominance in the league since 2017 means very little to this year’s team. The players know what the standard is at Garnet Valley, there’s no need to remind them.

Friday’s win was merely a jumping off point for the season and not a result that will guarantee easy wins the rest of the way. There’s a long season ahead.

“Too come out tonight against another good team and put up 55 … shows teams that just because we lost however many guys from last year, we’re still the same team,” Van Horn. “We’re still Garnet Valley football.”

Ellis was outstanding for the Royals (0-2, 0-1). He connected with Lavar Jackson for a 60-yard touchdown pass and also found paydirt on an 11-yard scramble. The senior rushed for 123 yards and threw for 88.