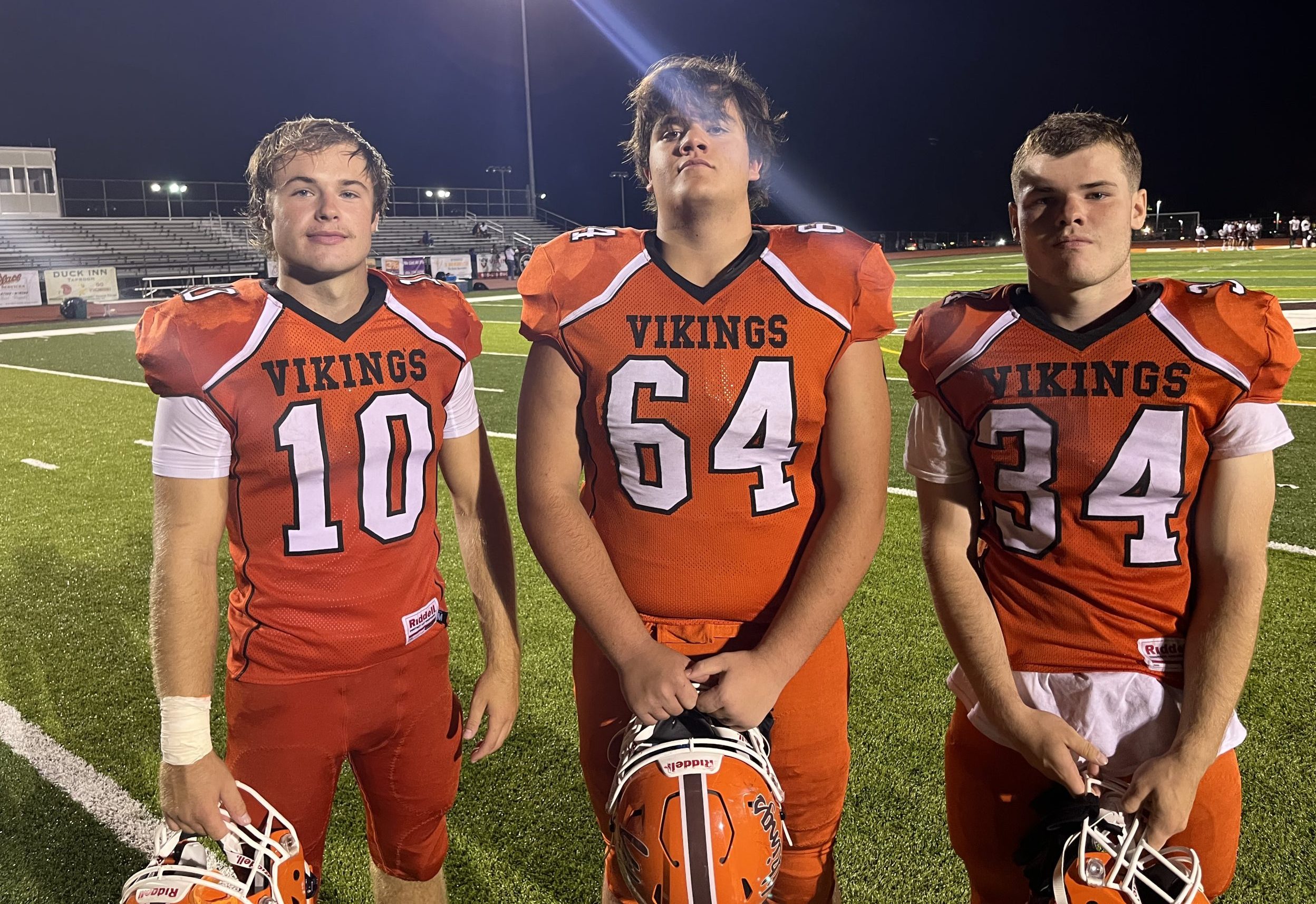 GRATERFORD >> Danny Koehler’s first career start lasted only a half.

That was a good thing, not bad, for Koehler and the Perkiomen Valley football team.

Koehler, the new Vikings’ starting quarterback after backing up Ethan Kohler the past two seasons, earned himself a spot back on the bench in the second half of Friday’s 66-6 opening night win over Penn Wood at Thomas J. Keenan Stadium.

Koehler racked up five total TDs and didn’t toss an incomplete pass in a half of play before relenting duties to his backup sophomore Patrick MacDonald. He completed 9 of 9 passes for 187 yards and four scores and also added four rushes for 58 yards and a touchdown.

“It was pretty cool. We had a great crowd out here,” Koehler said. “I was talking to Ethan (Kohler) before the game and I was just excited to come out and play well.”

Koehler has a tough task replacing Kohler, a four-year starter and the 2021 Mercury All-Area Player of the Year now at West Chester. (No they’re not related – check the spelling of those last names again).

Any early nerves were quelled when he found senior Michael Prouban for a 23-yard touchdown on his first pass of the game.

“I was a little nervous coming into it, but we had a great week of camp and great practice working up to this game, so we were excited,” Koehler said. “We knew we were going to run that play and we were able to get off to a good start.”

Koehler’s teammates are confident he is up to the task as well.

“We have 100 percent confidence in him,” senior offensive lineman Ioannis Tsitoukis said. “There’s no doubts with Danny. He’s been here for three years. He knows what to do. He was under Ethan for two. He’s a great quarterback and now it’s his turn.”

To pair with the potent air attack, PV junior running back Jacob Stewart ran the ball nine times for 77 yards and two scores. He broke about four tackles on a 34-yard TD run.

“It didn’t feel that crazy, but then everybody said it was pretty nice,” Stewart said.

“I thought he was down on the 20 and I look back and he’s in the end zone,” Tsitoukis said.

PV outgained the Patriots 329-118 in the first half. Punt returner Stephen Ciaduelli gave the team a boost with some lengthy punt returns, including a 41-yard return touchdown to spot PV a 13-0 lead.

After penalties (10 for 65 yards in the game) stymied their first two offensive drives, the Patriots put together an impressive 8-play, 85-yard TD drive to close the gap to 13-6 with 4:54 left in the first quarter. Senior quarterback David Anaglate capped the drive with a 16-yard TD pass to junior wideout Kivaleon Clarke.

That was as good as it got for Penn Wood as PV responded with 53 unanswered points and didn’t let the Penn Wood offense sniff the end zone for the remainder of the game.

“The little things we gotta do right,” Penn Wood coach Ato Troop said. “We gotta continue to work on our condition. We don’t got a lot of kids and we’re playing teams that have three times as many kids.

“Perk’s a good team. They run a good program and we knew they were gonna come out and play hard. Honestly, I thought it would be a little more competitive than this, but as a coach you know you go through these and you learn something as a coach and you just gotta get better.”

Troop noted Anaglate played better than his statline (9-for-22, 103 yards, TD) as he made good decisions throughout the game. Senior Marques Sarkor caught six passes for 76 yards.

Sophomore Anthony Rodriguez and junior Travis Moscariello both added second-half touchdowns for PV to finish the game’s scoring. Juniors Drew Kenworthy and Sam Koehler chipped in sacks on the defensive side of the ball.

Penn Wood heads into next week’s game against Avon Grove searching for its first win since the spring of 2021. The Vikings should find out more about where they stand next week with a marquee matchup against Downingtown West.

“I think we played well tonight, but we got a lot to work on, so we’re going to get better each game,” Stewart said.

Football: Names change, but result is the same for Strath Haven against Interboro
Pottstown can’t keep pace with Lower Merion in 35-0 Aces win