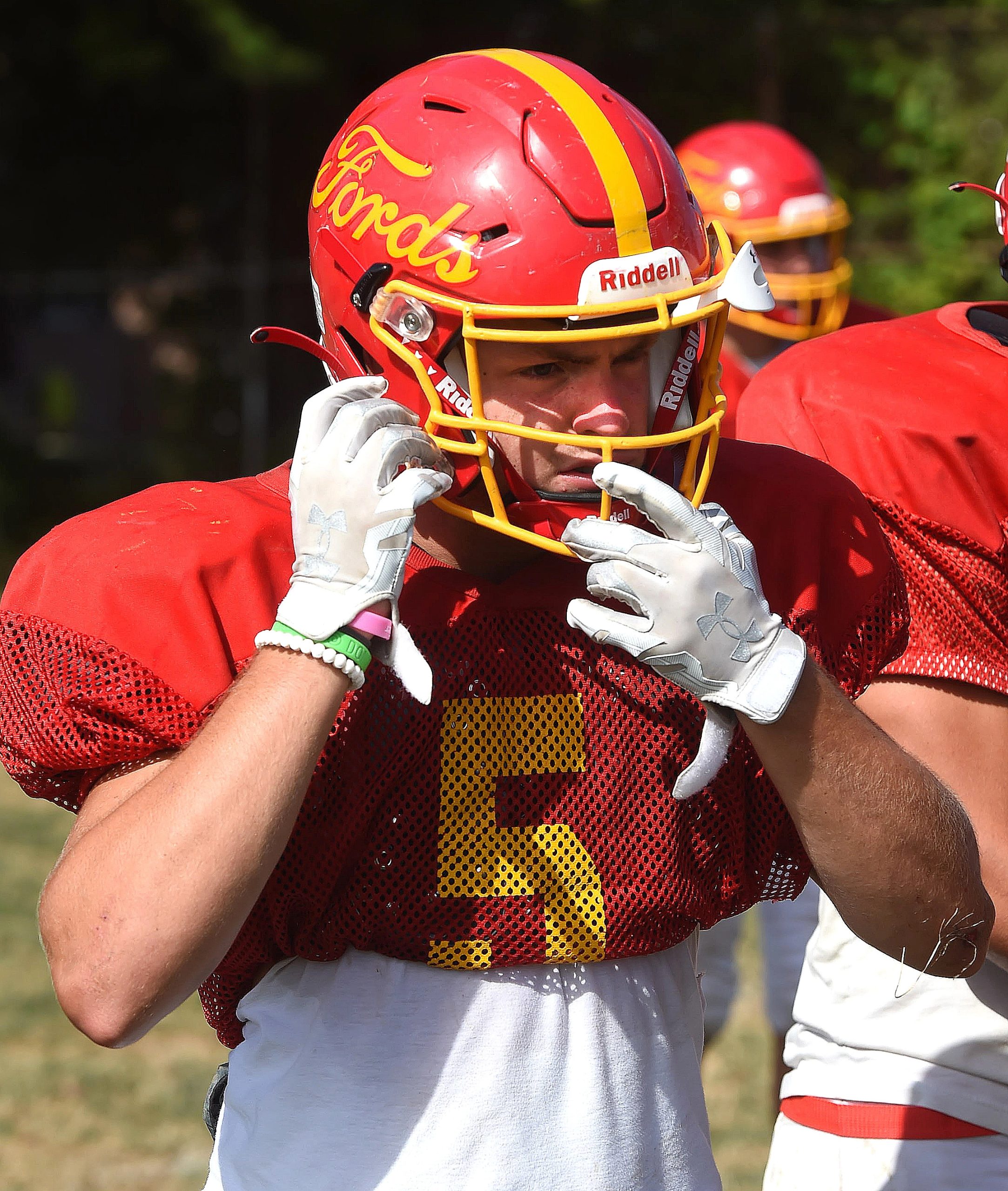 HAVERFORD >> Maybe some people think catching a football is so easy they can do it with one arm tied behind their back. Ethan Mahan might be out to prove that this season.

Oh, the Haverford High senior isn’t really fit to be tied, it’s just that metaphorically, at least, he thinks it might not be such a bad idea.

“I’ll run like this,” Mahan said during a recent practice at Haverford, illustrating his point by twisting his arm behind his back.

It wouldn’t be showing off, but instead a good protective measure for a left arm that might take Mahan a long way with his sports career. The 6-foot-1, 195-pound Mahan, after all, is a impressive left-handed pitcher for the Fords in the spring, and recently committed to a baseball scholarship offer from the University of Rhode Island.

While joking that he has to take care of his lucrative limb, Mahan is also real enough to know that his left arm should be a big part of his school’s football fortunes, bent the right way on hauling in victories.

Mahan the pitcher is also Mahan the pass catcher for a Haverford offense that could cause some significant damage in the Central League this fall season.

“I think there could be a lot of improvement for us,” said Haverford’s three-year varsity quarterback Tommy Wright, the one charged with putting the football into the crook of Mahan’s left arm. “We have a long way to go, but we’re headed in the right direction for sure, and I think we could possibly be contenders if we keep working, keep our heads up and stay together.” The Fords were together enough to forge five wins last season, despite it being a major season of transition for them. Longtime head coach Joe Gallagher had stepped down, and assistant Luke Dougherty was elevated to the top spot. But the Fords were also in a bit of a rebuilding mode while several Central League rivals were set to compete at higher levels.

Nevertheless, the 2021 Fords finished 5-7, managing to keep a streak of District 1 Class 6A playoff appearances intact.

“I was proud of that,” Dougherty said. “As a whole, it was a younger group, and we were just coming out of the COVID year and all that. Football was different. We were only playing six games (in a limited 2020 season).”

That revamped 2020 season in early 2021 wiped out any subsequent training camp work for what became a full 2021 fall season. While the league managed to pull that one off in full, teams in a rebuild like Haverford found it quite difficult to compete to the level that they could have with a full training camp for younger players.

“Expectations changed a little bit for everybody,” he said. “Our seniors now, the the last time they had done a summer camp was when they were sophomores. So they’ve come back here during camp and it’s like, ‘Man these guys are tough to get going, but they never did two-a-days before, because they didn’t have to do it as juniors.”

This year, however, Dougherty is introducing a new dynamic for his players and himself.

“You’ve got to prove yourself,” he said. “It takes a lot of hard work and determination, but talk’s cheap. You have to go out and earn it.”

Either way, this more experienced group of Fords seems to have a firm hold on their place in time.

“This year, I feel we have a better understanding of what camp is supposed to look like,” Dougherty said. “That’s nobody’s fault, it’s just the kids have more experience right now in terms of having a full season last year, and a full camp this year.”

Helping that latest transition is the thought that this year’s players are grasping the nuances of the game and the relationships it forces teams to forge.

“We had a full year of lifting, which is good,” Wright said. “It’s helped us a lot. We’re way stronger than last year, and I just think our morale this year has been a lot better, and our enthusiasm, it’s been way higher than it was. We’re staying together now. Our energy has been through the roof. We all just know each other more, and we’re way more like family now than we were last year.”

Wright, the 6-3, 205-pound experienced team leader threw for 1,873 yards and 23 touchdowns last season. Mahan, with both arms free, is a favorite target. He caught a school-record 10 touchdown passes as a junior, along with 48 receptions and 798 receiving yards.

Another target for Wright is Tyler Rogers, a wide receiver/defensive back returning from injury; while sophomore newbie with a great football name Zeke Bates (5-10, 185) offers the offense some flexibility as both a receiver and runner.

As for Mahan’s left arm, he says he said he had no problem telling those Rhode Island baseball recruiters that in the fall of his senior high school season … sorry, but football is coming first.

“They actually offered me a spot to play on the football team, too,” Mahan the Rams prospect said. “But that would take too much time out for me. … But no, they love athletes playing multiple sports.”

Especially those willing to jump in with both limbs.