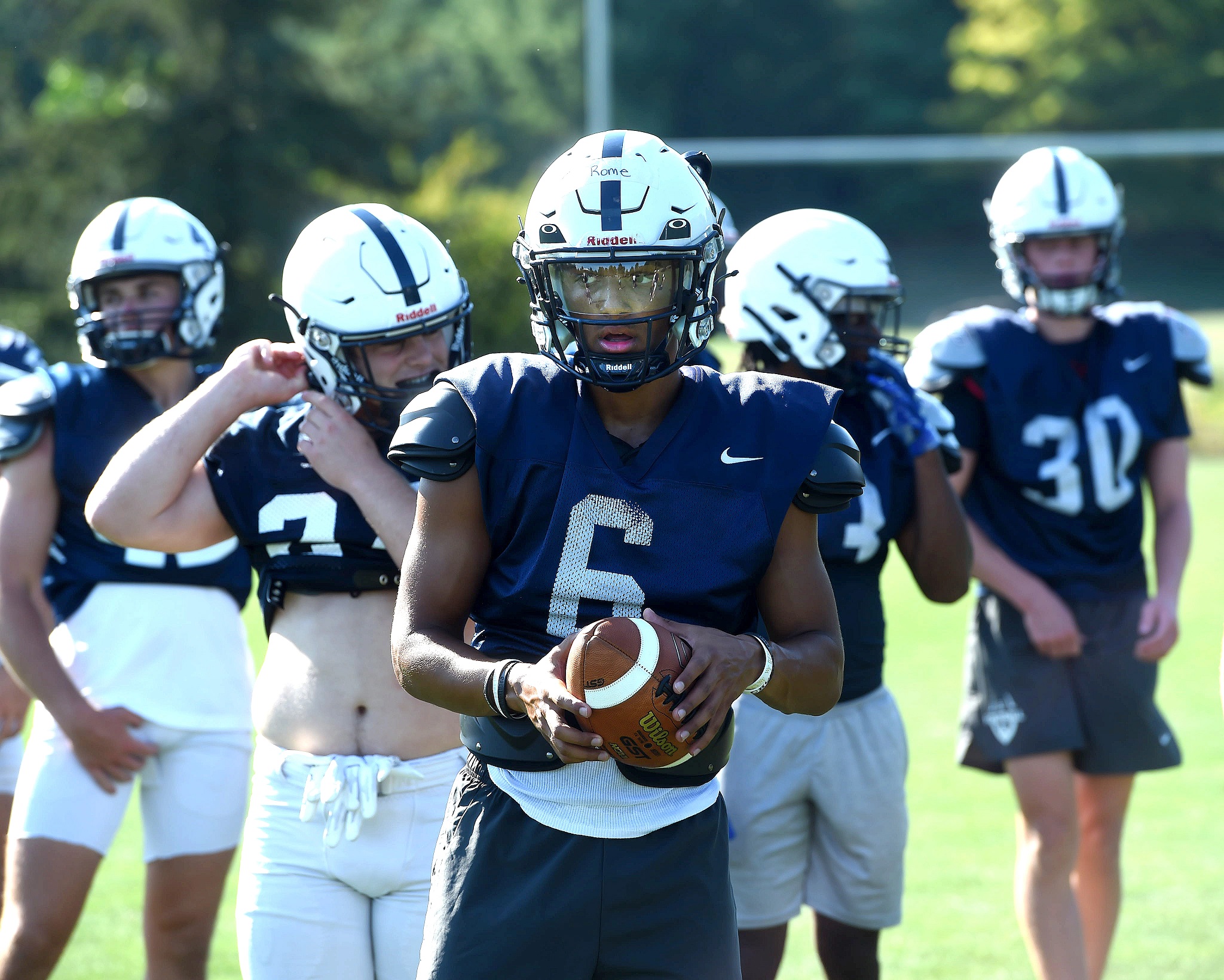 NEWTOWN SQUARE >> Somewhere between climbing high to haul in a touchdown pass late in practice last week and handing the ball to teammate TJ Cadden for a second attempt at an end zone dance, you couldn’t help but notice something from TJ Lamb.

It may have been heat acclimation week for Episcopal Academy. But Lamb and his mates were unmistakably having fun.

“It’s the best. I’ve never had so much fun playing football the last three years here,” said the 6-4 Lamb, who isn’t exactly the effusive type. “It’s extremely fun to play in. There’s so many options. We have threats all over the field. We can run the ball, pass the ball, do trick plays. It’s a lot of fun.”

There should be plenty of opportunities for fun for the Churchmen this year, particularly in Todd Fairlie’s pro-style offense, which spreads the ball — and the joy — around liberally. Overseeing the offense from the start is Na’Rome Rayborn. As a sophomore last fall, he got three games when quarterback Jake Fant went down with an injury and proved he was ready for the job. Episcopal Academy senior receiver TJ Cadden will be one of the team’s top offensive playmakers this season. (Pete Bannan/MediaNews Group)

Rayborn entered in the second half of the Germantown Academy game last fall, after Fant had run for two touchdowns, and orchestrated a fourth-quarter comeback. His touchdown pass with 49 seconds left, followed by a two-point conversion hookup with Cadden, earned EA a one-point win.

A week later, he threw two touchdowns, including a 22-yarder to Cadden with 1:18 left, to rally from down 20-13 and get past Penn Charter. His final start featured a rushing TD and a passing score in routing Springside Chestnut Hill.

That’s three wins out of the Churchmen’s 6-4 campaign, including all three of their Inter-Ac triumphs.

“He’s easy to work with,” Lamb said of Rayborn. “He studied the playbook for the entire season, so he was ready to get in there. And having him back again this year, it’s like we almost never left off last year. The last couple of practices, we’ve been connecting really well.”

Rayborn entered last year unsure if he’d get any time. This season, knowing the reins are his, the junior is more confident and focused on the job ahead, to go with an all-around physical skillset.

It won’t necessarily be an easy jump in year two. Most of the major contributors at the skill positions were seniors last fall, which means Fairlie will need to flesh out his array of options anew. Cadden, the 6-foot speedster, can impact the game wherever he gets touches. Lamb, a 6-4 Cornell lacrosse commit, is a big target out wide, the only returnee among last year’s three Inter-Ac first-teamers.

“It’s very important because last year, those were the guys that I would be throwing with every day and I’m learning their tendencies, they’re learning my tendencies,” Rabyorn said of the TJs. “As I’m starting to develop, they’re also developing.

As connections grow, we’re just going to get better over time, and I’m very confident this year that those connections are going to lead us to be a very good team.”

Gone from the passing game are deep threats Bryce Cooper and Mekhi Rodgers. Running back/linebacker Andrew McMeekin was the heart and soul on both offense and defense.

“Andrew, his mentality was insane,” Lamb said of the two-time lacrosse All-Delco and Princeton faceoff man. “He played almost every single play, played hard, showed everyone how to do stuff. I think a lot of the seniors this year need to take over that role.”

The backfield situation is the only real question mark, with juniors Zeke Kane and Chris Purnell expected to step up. Tight end Ryan Appaneal and junior wide out Eric Demyun — at 6-4 and 6-2, respectively — will get looks from Rayborn in the passing game.

The line may be a strength, so long as it can avoid injuries. Victor Coleman and Tom Rafferty anchor the offensive front. Michael Martillotti, who with Cadden was a second-team All-Inter-Ac pick last year, is the leader in the defensive trenches.

Both AJ Koukou and Michael Minicozzi should contribute there after missing last season due to injury. Michael Cadden will join big brother TJ in the defensive secondary, behind linebacker Jack Gallagher.

This year’s schedule features out-of-state challenges from All Saints Episcopal School of Texas and New Jersey’s Blair Academy. The nonleague tune-ups seemed to serve EA last year, with a 6-2 start, before a 17-7 loss at Malvern Prep and a 13-7 setback to rival Haverford School ended the year on a down note.

This year, they’re hoping to script an ending that is more satisfactory. Maybe even more … fun?

“It’s extremely fun,” Rayborn said. “Being a dual-threat quarterback, especially in this day and age and in this league especially, there’s so much that Coach Fairlie put together and there’s so much opportunity for me, the running backs, the wide receivers. When you put it all together, it just makes us a much more elite team.”