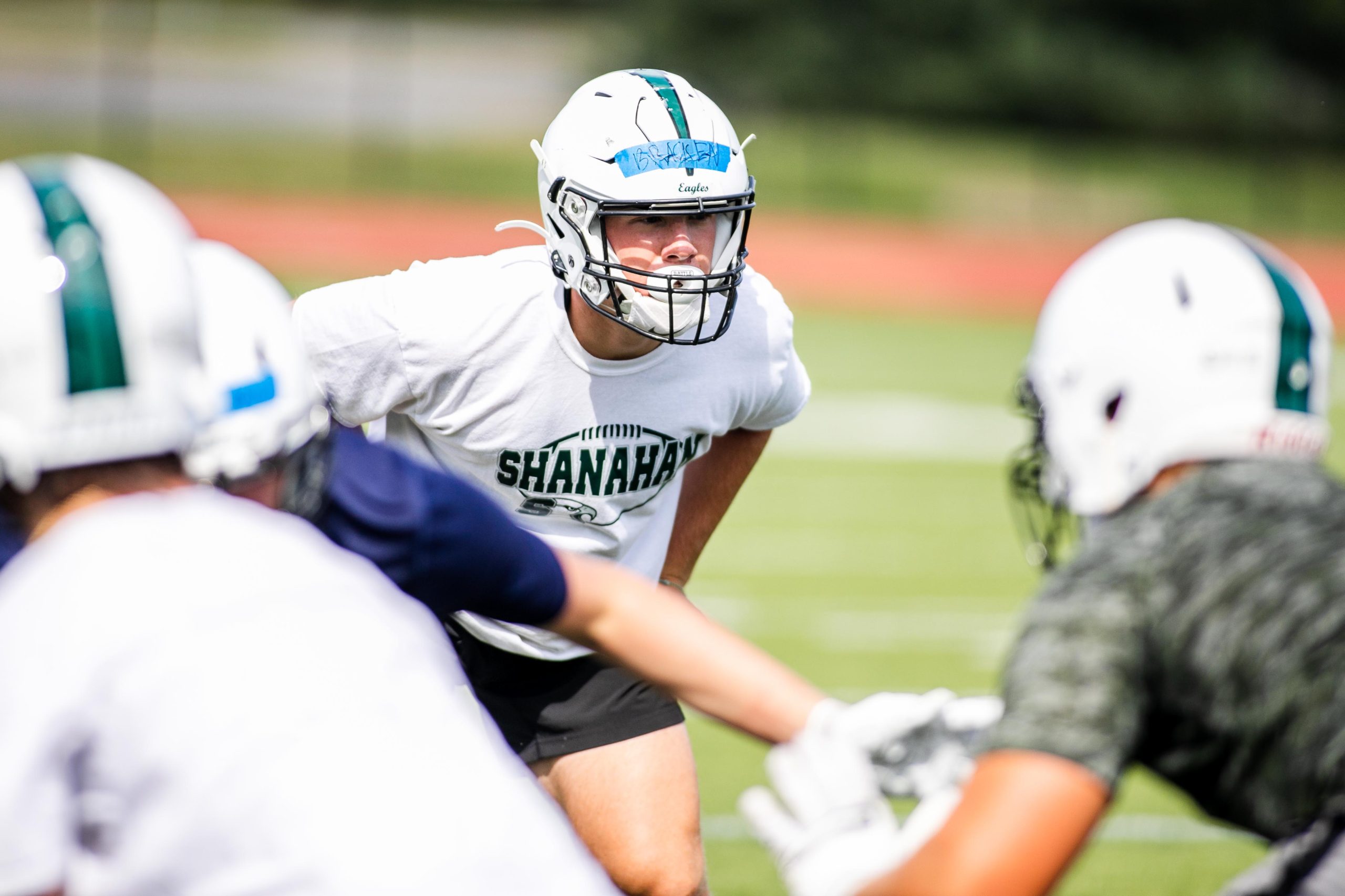 The 2021 football season was one for the ages for the Bishop Shanahan football team. The Eagles captured the District 1 4A championship, its second District 1 4A title in three years, and advanced all the way to the PIAA 4A semifinals before bowing to Bishop McDevitt.
The 11-4 record was the most wins ever by a Bishop Shanahan football team.But, as is the case in high school football, graduation has hit Bishop Shanahan very hard.
The Eagles graduated 32 seniors from the 2021 squad and only have one offensive and two defensive starters returning for the 2022 season.
Bishop Shanahan head coach Paul Meyers knows his team is young and inexperienced but talked about his young team.
“We are very young but I know our junior class is really close. They are a very tight knit group and they really believe they can win games and that belief is so important to a team. They are a very hard working group and they have really been putting in a lot of work in the off season.”

Bishop Shanahan’s Trevor Barbadora is one of the few returning skill players who got touches last fall, and the junior will also play cornerback. (Nate Heckenberger – For MediaNews Group)

Possibly the biggest piece the Bishop Shanahan 2022 football team  is the quarterback position. Last season, senior Cooper Jordan accounted for over 4,000 yards combined with his arm and his legs. Meyers said that no decision has been made yet on the quarterback position and the job will be won by what player picks up the offense quicker.

“We have two guys competing for the job,” Meyers said. “We have Landon Wright and Zach Ferrero, who was our third string quarterback last season,  both going for the job and whoever picks up the offense quicker will be the starter.
We are going to run the same offense as we always have and I think either one of those guys can run our spread offense. We are going to tweak things a little and give our fullback, Pat Gallagher, a lot of carries.

Bishop Shanahan’s Pat Gallagher will see a lot of action as fullback, and will fill a linebacker spot, as well. (Nate Heckenberger – For MediaNews Group)

“Pat is a returning starter and he is a very good, tough runner that likes to carry the ball a lot. I think the strength of our team might be our linebackers. Pat, also is our middle linebacker and him and Sean Bracken both saw a lot of time last season.

Sean had a big Pick Six inner opening round playoff game last season and both of them are very good linebackers.”
With so much inexperience throughout the Bishop Shanahan roster, Gallagher, a junior, is stepping up his role on the field and off the field, showing the younger guys on the squad the Bishop Shanahan way and he also is relishing carrying the football a lot during games.

Bishop Shanahan’s Luke Lorenz steps in as a leader on both sides of the line. (Nate Heckenberger – For MediaNews Group)

“I am really looking forward to the season and I love to carry the football a lot during games. I like to run right up the gut and I like physical play. I think we are going to able to run the football because we have really been putting in a lot of hard work in the off season and at practices and i like our offensive line.”
Besides the rigors of a Ches-Mont National Division schedule, Bishop Shanahan will play non league opponents, Chichester, Central High School, Penn Wood and Phoenixville as well as a Ches-Mont league crossover game with Great Valley.
The Eagles had a team cancel on them for a Week One game and currently have only nine games schedules as they are trying to get a game for the August 26 opening week.

Bishop Shanahan’s Aidan Dearing is hoping to be a playmaker in the defensive secondary. (Nate Heckenberger – For MediaNews Group)

Phoenixville hoping to pick up where it left off after strong finish in 2021
Pope John Paul II motivated by abrupt end to last season, ready to right wrongs under new coach Scott Reed