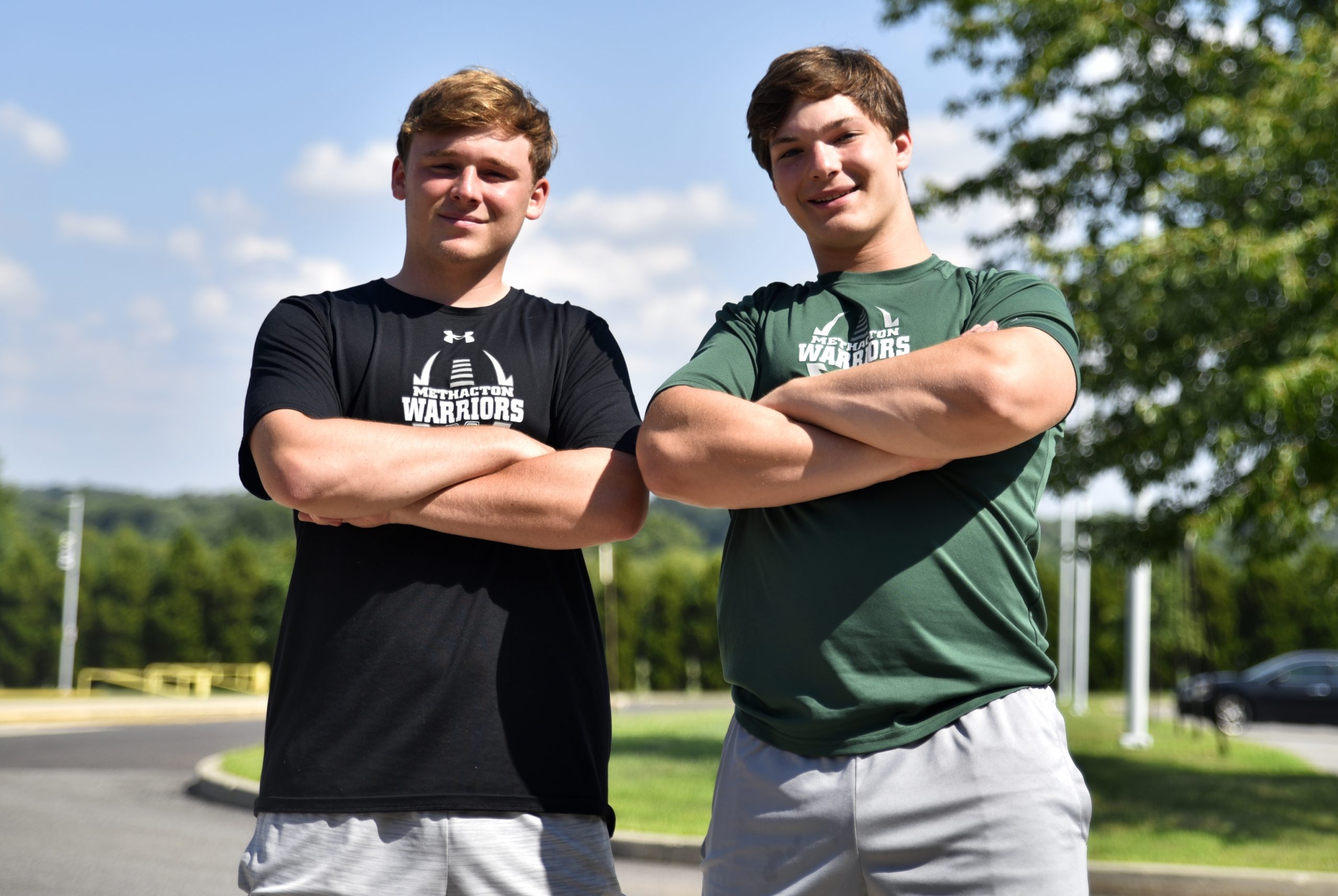 Tyler Deal, right, and Michael Wolbers will be looked on to lead Methacton in 2022. (Owen McCue - For MediaNews Group)

With Kennedy in his second year on the job, things feel a little different around the program early in the preseason.

“It’s really nice having just security, knowing that we have a good coach this year to lead us through the season, get us plays officially because last year we didn’t have a playbook officially until two weeks before the start of the season and everyone was worried about that,” said Tyler Deal, a senior offensive and defensive lineman. “Now having the security of a good coach and a new playbook and all the training he’s putting us through is really helping us feel confident in our season.”

Kennedy led the Warriors to a .500 mark for the second consecutive season in 2021. The Warriors broke a four-game skid with a Pioneer Athletic Crossover victory over Upper Perkiomen to secure the milestone.

The back-to-back seasons with a .500 record or better is the first time the program accomplished the feat since a stretch of five straight seasons from 2011-2014. Kennedy is excited about what this year’s group can accomplish with a whole offseason cycle working together.

“Just to get the chance to know the kids individually and collectively as a group will help a lot,” Kennedy said. “With the playbook, we’ve been installing stuff throughout the spring and the summer, so what we’re going to do is coming together pretty seamlessly at this point. Obviously, we have a lot to build on, but just having some time to catch my breath this year has been nice.”

As one of the smaller Class 6A football programs in the state, Methacton has struggled at times in the PAC’s Liberty Division.

During that stretch the Warriors have fared better against Class 5A foes, a possible sign of things to come as they drop down a division in classification this season.

The District 1-5A postseason doesn’t seem out of reach.

“Down the road I think everyone on our team is confident we can make it into the playoffs this year,” Deal said.

Quarterback Dan Brandi (Salisbury) leaves some big holes to fill after leading the team in both passing and rushing last season. Senior Michael Wolbers steps in to take over the signal caller duties and will have a lot of returners to help him on offense.

“Our offense is actually looking really good this year,” Wolbers said. “A lot of our players have worked really hard during the offseason and just practicing over the summer we’ve been improving our teamwork really well, which is going to make us a whole lot better.”

Senior Josh Cancro, who will also play tight end, should be a difference maker for the group on defense after recording three sacks last season.

Chapman gives the group some experience in the defensive backfield. Senior kicker Tyler Ready is another returner for the Warriors.

“We’re moving some guys around here or there to see where they can play, but overall we have a good solid defense this year and we’re looking to see what they can really do when they need to perform,” Deal said.

Kennedy said one of the missions this offseason was to simplify things on offense and defense. The goal is to play fast and smart on defense and to eliminate mistakes on offense that dug the Warriors some holes last season.

“Last year, we learned a lot, what works, what obviously doesn’t work,” Wolbers said. “We’re going to take away what we learned from that.”

Kennedy is excited about the depth around the roster, noting a good mix of juniors and seniors. He is preaching roles and has noted a strong bond around this group early in the season through their offseason efforts.

“The culture right now in our locker room is really good, and that’s something that I really want to instill that this is a special thing,” Kennedy said.

“You’re high school years playing football, this is special. It’s more than just Xs and Os and Friday night. Those are big, but what do we do Monday, Tuesday, Wednesday, Thursday to get ready for Friday night.”

If things come together, Kennedy is optimistic about what this group can accomplish down the line, but he doesn’t want his team’s eyes to wander past their opener against Lower Merion.

Methacton also has matchups with Pottsgrove, Plymouth Whitemarsh and Wissahickon on its non-conference slate before getting into PAC play.

“(Making the playoffs) in the back of our mind obviously, but our focus is Week 1,” Kennedy said. “We’re looking at practice one getting better, practice two getting better. Do we have lofty goals? Absolutely. We want to get into the playoffs and we’d like to win a game in the playoffs.”

That would be a special accomplishment for a program that hasn’t reached districts since the 1990s.