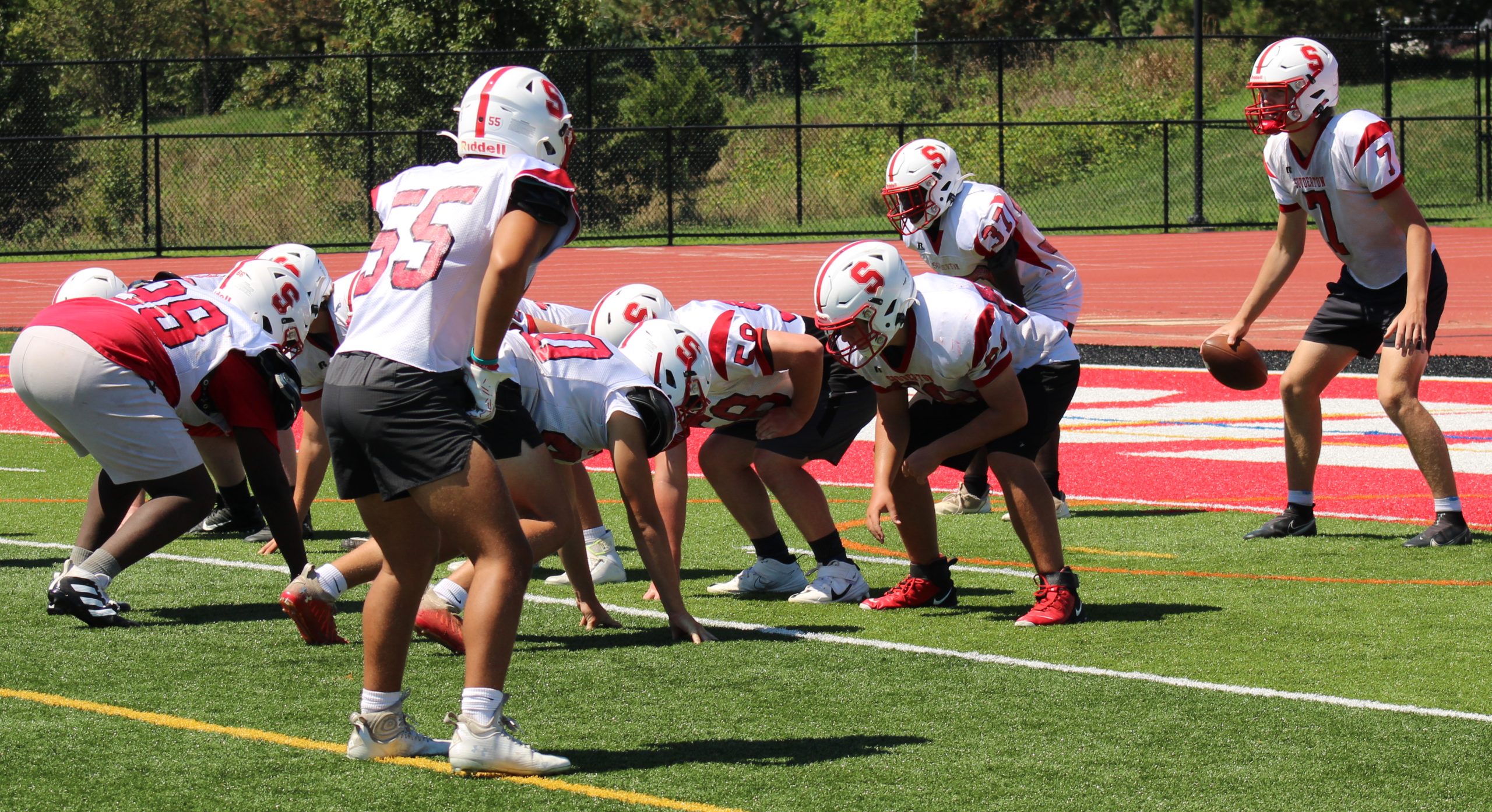 Souderton runs its offense during a practice on Friday, Aug. 12, 2022. (Kev Hunter/MediaNews Group)

FRANCONIA >> Leaving the practice field with his teammates as they prepared to head to their annual golf outing, Souderton’s Jared Zimmerman looked forward to the challenge.

“It’s gonna be fun. I’m playing in it so hopefully I can win,” said the senior.

Another tradition around Souderton is the playoffs: Big Red has qualified in each of the past three seasons, including a District 1-6A Title in 2020.

Zimmerman, back under center for the Indians, looks to lead them back to the postseason.

“Our defense is really good and our offense is up there too,” Zimmerman said. “We have a lot of returning players and a lot of sophomores are stepping up as well.

“We want the division title really, really bad. Our number-one goal every year is to get to the playoffs.”

Souderton is part of a stacked Suburban One League Continental Conference. Big Red finished third in the division a season ago at 5-2. Quakertown went unbeaten at 7-0 and Upper Dublin was 6-1.

Big Red looks to have the experience as well as the firepower at the skill positions to make a push for the top spot.

“I’m very pleased with this group,” Big Red coach Ed Gallagher said. “They had a good offseason and they’ve come in with the right attitude and the right mindset. I’m looking forward to the season.

“Upper Dublin returns a decent amount of players from a really good team so I think they should be up in contention this year. Quakertown is always good. They won it last year so until someone beats them, they’re the champs. Those are the two you circle right away because those are the two that beat us last year. So hopefully we can continue to do our thing against the other five teams and take our shots at those two. I feel pretty confident that we’re gonna be in the mix for the conference championship.”

A big reason for that confidence is Souderton’s three captains: Zimmerman, along with Shaun Purvy and Chris Kerns.

“Shaun Purvy returns, which is huge for us,” Gallagher said. “It was crushing losing him last year. He was an all-league player as a sophomore and then only got to play two quarters last year, getting hurt in the opener against North Penn. So getting him back is a huge lift from an athletic standpoint and a leadership standpoint. The kids really look up to him and follow him and he’s been outstanding as a leader.”

Kerns moves to inside linebacker and should be a disruptive force there.

“He put on some weight and looks really good,” Gallagher said. “He should be a really good two-way player for us.”

Zimmerman, meanwhile, got some valuable experience under center at the end of last season.

“He started the last couple games at quarterback for us and really made some strides,” Gallagher said. “He had a great summer, a great offseason. He’s playing with a lot of confidence right now.”

“I wanna hit right now,” he said. “(Thursday night), we had pictures – I just wanted to play a game then.”

Purvy’s wait is over as well.

“I just can’t wait to get back on the field,” he said.

The offense is shaping up nicely.

Said Gallagher: “The o-line still has some things that we need to tweak. But our skill guys are really talented and it’s gonna be a really good team. We’re gonna create some matchup problems for other teams.”

Souderton linemen get ready for a drill during their practice on Friday, Aug. 12, 2022. (Kev Hunter/MediaNews Group)

Souderton will be going for its fourth straight playoff appearance.