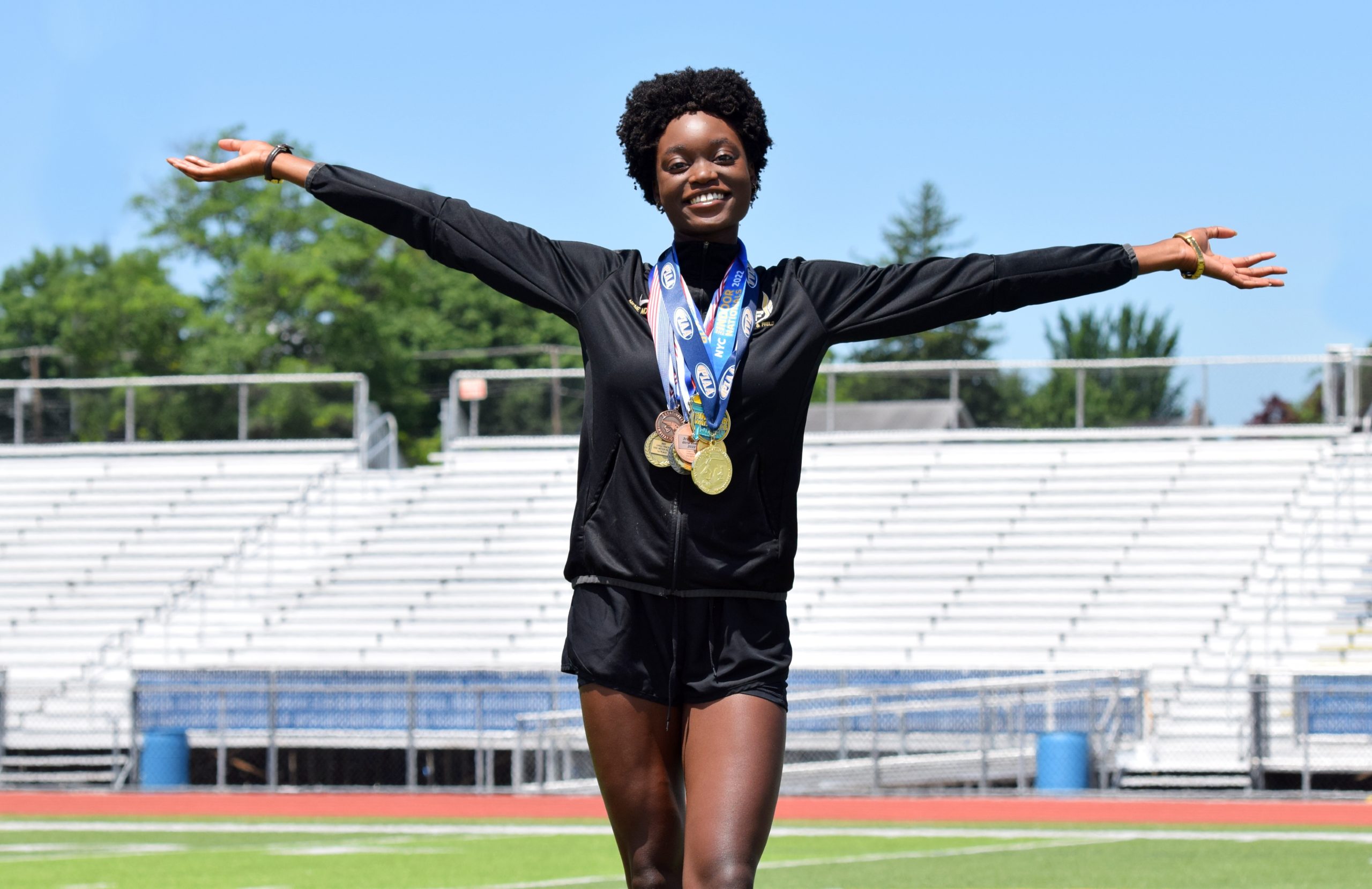 Get to know Nene Mokonchu and you’ll quickly find track and field doesn’t hold exclusive residence in her mind.

“I’ve always been so interested in social justice in every realm, whether racial or environmental, anything for other people,” said Mokonchu. “Even when I said I was going to study pre-law and political science at Brown, it was me nurturing that interest I’ve always had.”

She’s always been guided by a higher calling.

Her athletic higher calling came this spring as Mokonchu won every high jump competition entered, earning Penn Relays, Pioneer Athletic Conference and District 1 championships before the culmination of her scholastic career when she cleared a personal-best 5-10 to win gold at the PIAA Track and Field Championships at Shippensburg University on May 28.

Mokonchu was also a major contributor on the track for the Spring-Ford girls, earning PAC silver in the 400 meters and anchoring the conference champion 4×400 relay. She departs as the Spring-Ford record holder in the 200 (25.49), 400 (57.53) and high jump.

Her parents, George Mokonchu and Dr. Ester Oben Etah, grew up in Cameroon, both earning scholarships that ultimately led them to London, where Mokonchu earned his MBA and Oben Etah her Ph.D. by age 25 while they began a family with first daughter Alma.

The family emigrated to Pennsylvania before Nene and twin sister Ester were born. Ester and younger sister Vania were both throws standouts for the Rams this spring, making Spring-Ford a force in field events just within one household.

“I come from an immigrant family and they’ve always stressed striving for excellence in everything you do,” Nene Mokonchu said. “My mom’s a doctor, my dad’s in finance so they’ve always been very education-oriented.”

“No one is pushing for you to do something, you have to push yourself. Everything you get, you have to deserve it.”

Guided by such high standards, non-sport passions and strong spiritual beliefs – she considers herself ‘very religious’ – in her younger years she wondered if athletics merited a place in her life.

“As a kid I even contemplated quitting track because I thought, ‘I have to be focused on cultivating other skills that aren’t sports-related,’ she said.

“I think when I started having fun with track, especially this year, I realized I can do it all at once. Excellence is the end goal.”

Her senior-season ascent wasn’t a given. She burst on to the scene as a freshman in 2019 and won the 400 and high jump PAC titles in a championship meet-record 5-6. But Mokonchu’s progression was stunted when the 2020 season was cancelled by the COVID-19 pandemic and she plateaued through her junior season. She made states but only cleared 4-10 in Shippensburg and did not place.

“It was just a mental thing,” she said. “The worst thing in life is wasted potential. And I have so much potential, but it was all just being afraid of hurting my back or hitting the bar. It was sad to think that (other competitors are excelling) and I know I can do it, too. I’ve been athletic all my life but I’m letting my mind get in the way.”

Other competitors may not have the same luxury, but Mokonchu is largely accurate that the physical was not holding her back: her long, slender physique and near 6-0 height make her a prototype for a jumper.

She unlocked something in herself when she cleared 5-7½ at the DVGTCA Meet Of Champions on Feb. 18 at Lehigh University.

“Right when I jumped that I knew I could break that plateau,” Mokonchu said. “It was all about execution. I know I have the ability, I know I have the speed and the IQ for the sport. I have my coaches, but I know everything I need to do to practice and coach myself. It’s like a science and once you gain that science and it’s now just about execution, it’s easy to start having fun with it.”

A week later she was the champion at the PTFCA Indoor State Championships at Penn State, her 5-8 clearance a new best that sent her into the outdoor season in the best possible mindset.

She achieved 5-9 at the Coach Ron Livers Perkiomen Valley Invitational on April 8. But the rapid climb she’d experienced the previous two months went on hiatus.

It didn’t stop her from winning the Penn Relays title against an international field (5-7 ¾).

Mokonchu consistently cleared 5-8 heading into the postseason, good for a PAC championship meet-record 5-8 – bettering her own 2019 mark – and going six inches better than runner-up. Her 5-7 was four inches better than second place at the District 1 Championships at Coatesville a week later.

“I stopped one meet after jumping 5-4. And I was thinking, next week’s probably just going to be 5-8 again. I would see (the bar at) 5-10 and the whole mental block would happen again. That was frustrating, but I told myself to be grateful for being here and doing track.”

The mental challenges didn’t leave Mokonchu – she’s prone to overanalysis and could too often allow herself to be distracted by imperfect conditions while competing. You could see a battle being waged inside her mind before most every attempt.

“Even when you have a time limit like at states or Penn Relays, it was ‘Oh my gosh, that referee’s walking past my focal point’ or ‘They’re getting ready to run’, ‘a big herd is coming.’ (But I would tell myself), ‘Nene, you are letting it be taken from you! Those little things can’t get in your way. You have to want it.’”

Her state championship triumph was a true case of saving her best for last.

Mokonchu was largely unrivaled in the high jump this spring. But she entered as the No. 2 seed behind Warwick’s Katie Becker, who cleared 5-10 a week earlier at the District 3 championships.

Mokonchu and Becker had the duel spectators hoped for after being the lone two athletes to clear 5-6.

Mokonchu was down to her last attempt at 5-8 – Becker cleared the height in two tries – but cleared to stay in it. Both overtook 5-9 in one attempt.
At 5-10, Becker failed in her three attempts. Mokonchu had the same fate in her first two tries.

In her third and final attempt, a jump that was the difference between gold and silver – Becker would have been the winner after clearing 5-8 on fewer attempts – it was Mokonchu’s moment.

“It was the last attempt. I never hit the bar with my back or butt, it’s always just the edge of my trail leg,” Mokonchu said. “‘You have the height, you know you can jump so high.’ I got on the line, knew I had nothing to fear.”

“I was thrilled,” she said. “I looked back up at the bar and it was wobbling a bit but I made sure it didn’t fall off. The crowd was so excited too. It was such a thrilling moment.”

Between her appetite for learning and the grace and humility she lives by thanks to her strong faith life, the end of her high school career is just a milestone.

“I always acknowledge I’m not a perfect person in track or outside of track. I always want to know things I can work on,” she said. “You wake up every day to learn.”