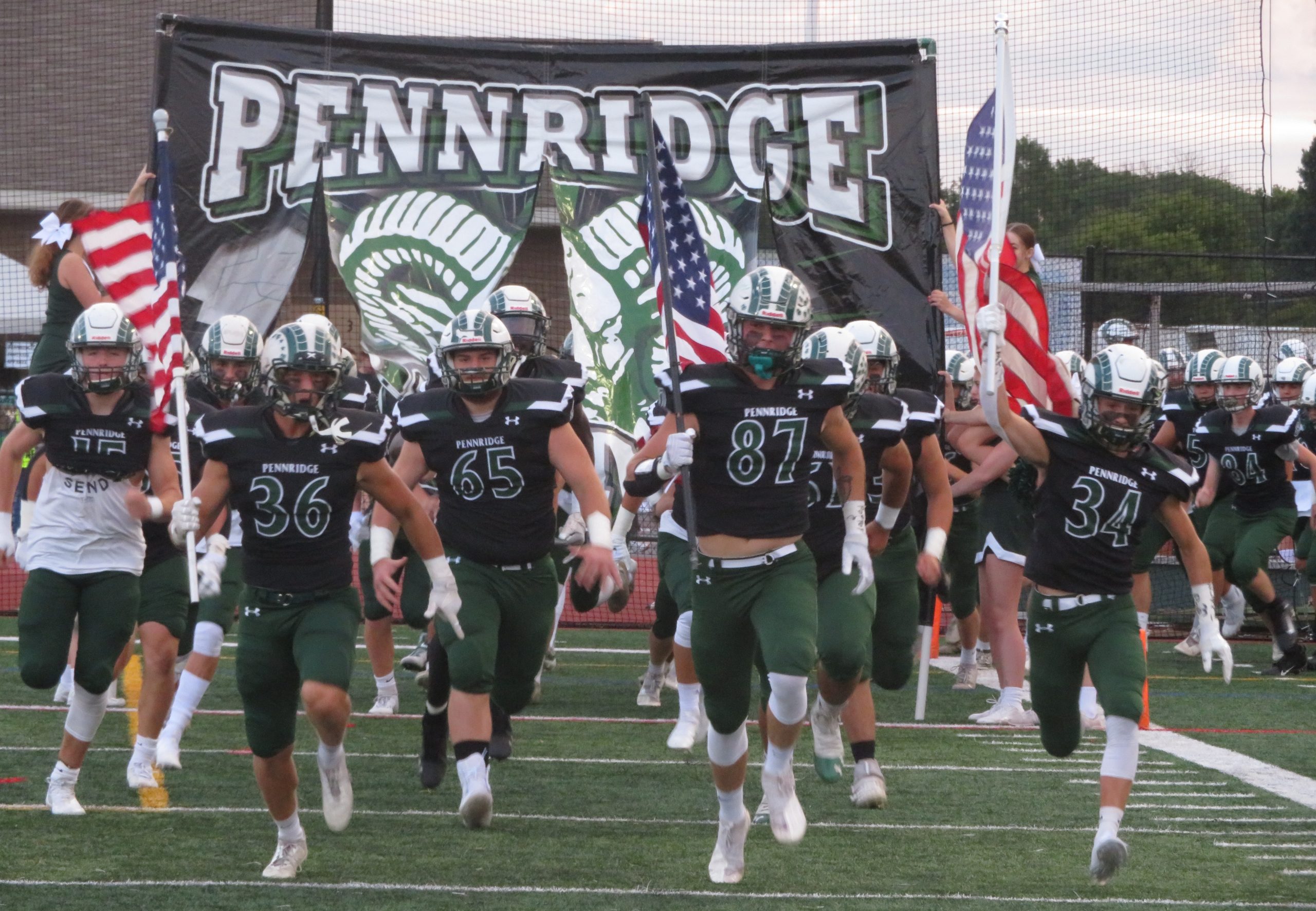 The Pennridge football team runs on to the field before its game against Pennsbury on Friday, Sept. 3, 2021. (Mike Cabrey/MediaNews Group)

Chuck Burgy had thoughts about becoming a head coach but in wanting to stay at Pennridge the opportunity was a limited one.

“I’ve been with a few head coaches in my time at Pennridge and you see what to do and what maybe you’d do different,” he said. “And it’s just no, I never thought it would actually come to fruition. I thought about it, yeah, as like a dream but I didn’t think that I would have the chance if I was at Pennridge just given the guys that were in place.”

But in May, Rams football head coach Cody Muller stepped down after taking a teaching and coaching position with James Martin High School in Arlington, Texas and Burgy felt the time was right to see if could do the job.

On June 22, Burgy was given his chance to run the program – after a process that included 19 other applicants the Pennridge School Board approved his appointment as the Rams new head coach.

“I didn’t really ever think that it would be a possibility cause I wasn’t looking to leave Pennridge and it just so happened that Cody’s 12 years younger than me so I thought he’d outlive me as a coach,” Burgy said. “I’m 43 so I just thought that I’d just continue on as a future (assistant) and coach there on his staff. But if this came up, I was ready to take the shot so that’s kind of how it went. And when he did tell our administrators, I did put in for it. It was a thorough process and our AD Scott Hagen and Dr. (Stephen) Cashman our principal, they ran a rigorous process to figure this out.

“And the timing’s not favorable, it is late, but we were able to keep training and the weight room and the offseason stuff kind of moving and the kids were great. The kids just stayed focused and we have incredible senior leaders, we have 24 seniors or so and they’re all in and it’s an amazing group of guys and there was no way to walk away from it. I kept the majority of the staff intact and we’re just driving on.”

Burgy, an Archbishop Wood grad, has had a few coaching stints at Pennridge since 2005, the latest beginning in Muller’s second season in 2019. He was the team’s offensive and defensive line coach but Burgy said he tried wherever he could to help Muller.

Burgy has also been a teacher at Pennridge since 2011. He is a member of the high school’s English and Business departments.

“I’m a teacher first so I think football’s a teaching tool, it’s an extension of our classroom at the high school level,” Burgy said. “So I think that making sure that they put those things together, that they know that the academics go hand-in-hand with the athletics and it’s all a learning process. So I’m all in for that type of philosophy – I’m trying to build character in the program and continue what Cody’s mindset was, I think he did a lot of great things and I think that our goal is to take it to the next level.

“And the guys who are on staff know that and they’re bought into it, the players are bought into it and that’s huge. The families, we have great families in the district that are totally supportive, very involved and our administration is supporting what we’re doing. So it’s a really cool situation I think especially as a first-year guy to have all those resources and support and people moving forward with us.”

Muller, who took over Pennridge in 2018, went 22-20 in his four seasons, the Rams posting consecutive winning records the past two years.

During the COVID-19-shortened 2020 campaign, the Rams went 7-1 and claimed the Suburban One League National Conference title. Pennridge won its first five games to qualify for the four-team District 1-6A playoffs, topped Coatesville 36-33 in the semifinals before falling to Souderton in the final 31-17.

“I would’ve really liked to see what that COVID-year team would’ve done with a full schedule,” Burgy said. “We were firing on all cylinders against every obstacle imaginable just to keep the team on the field that year. That class with Shane Hartzell and (Jack) Ferguson and Jake Tarburton that was a strong senior class and that group would’ve been something with a full season. It would’ve been really nice to see that.”

In 2021 Pennridge split its first six games before ending the regular season with four straight victories to earn a spot in the District 1-6A tournament. The Rams fell to Central Bucks West 19-17 in the first round then lost to Quakertown 21-0 on Thanksgiving to finish at 7-5.

“Last year I think that we left some things on the table,” Burgy said. “It was a disappointing end with a team that had a lot of potential but the senior group we have now is a product of those two seasons. They learned under Hartzell and that group with that district run and then last year as juniors. And now that they’re taking the reins I think they’re really well-prepared to do some things.”

In between Muller stepping down in May and him becoming head coach June 22, Burgy was among the coaching staff that was working to maintain the Rams’ offseason training.

“We were trying to do three-to-four days a week with our lifts and continuing to work with field work and keeping the kids focused,” Burgy said. “And I attribute that totally to the staff guys that stuck around. And they had no assurances and no contracts in place, no decisions and they stayed basically just because of their allegiance to the kids and the kids stayed with us and we just kept driving forward knowing that the final decision was out of our hands, we just tried to stay focused on the task at hand.

“I mean, they have a season regardless of who would’ve been in the spot, they had a season to get ready for and that’s really the mindset that they kept and I credit them for that.”

Pennridge opens the 2022 at home against Downingtown East Aug. 26. The Rams then visit Souderton and host Bensalem before starting SOL National Conference play at Abington Sept. 16. The annual Thanksgiving Day clash with Quakertown will have higher stakes for Burgy’s family as two of his sons are now playing for the Panthers.

“We try to keep it light at the dinner table but it’s definitely going to get interesting in the next few years,” Burgy said. “Looking forward to it.”