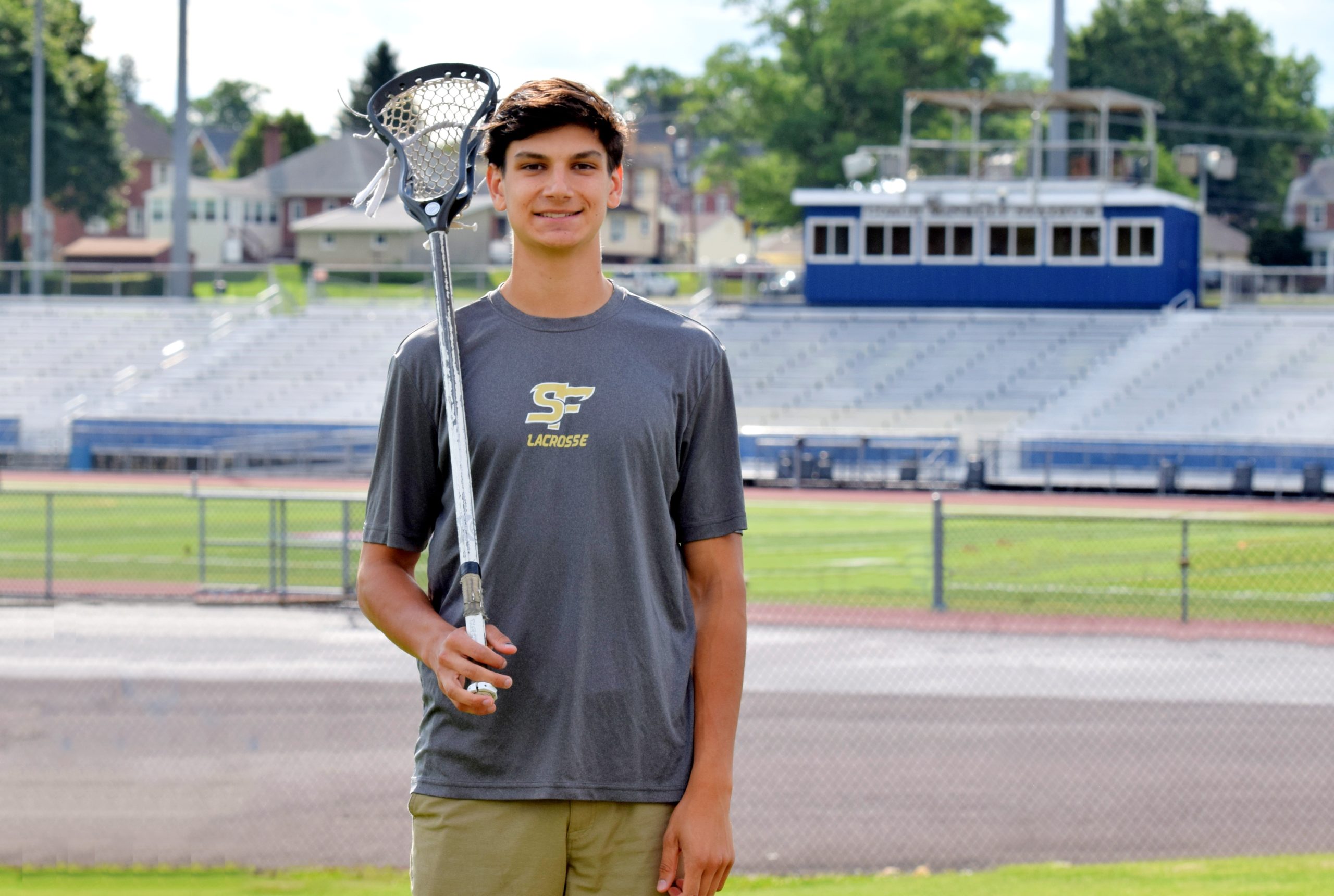 Christian Marchini didn’t lead his team in goals in 2022.

He didn’t lead the team in assists either.

Nor ground balls, caused turnovers, or any other stat that jumps out to a lacrosse fan.

Instead, Marchini simply led his team.

The Spring-Ford midfielder and captain was the player who symbolized the Rams’ balance and team-first approach as the Rams recovered from a slightly disappointing 2021 campaign to amass an undefeated league record and regain the Pioneer Athletic Conference boys’ lacrosse title. For that, he is our 2022 Mercury Area Boys’ Lacrosse Player of the Year.

Marchini had the numbers to make him an integral part of the Spring-Ford offense, but it was his defense that set him and the Rams apart in their most critical league matchups. In five matchups this season against the league’s top contenders (defending champions Perkiomen Valley, plus two games each with Owen J. Roberts and Methacton) the Rams allowed only 22 goals in total – an average of less than five goals per contest. That will win you most lacrosse games.

But it’s not everyday you see a player who eclipses the 30-goal mark described as a defensive midfielder – as Marchini is listed for his next team at St. Joseph’s University, where he will enroll and play lacrosse next year. The 6-foot-3 midfielder says a late growth spurt didn’t affect his athleticism on the field, so he can now add height to his impressive list of strengths as a player.

“Both here at Spring-Ford and with my travel lacrosse program (Freedom Lacrosse) I’ve prioritized defense over the past three years or so,” said Marchini. “I know I can play defense; I know I can handle the ball and thrive at times on the offensive end.” It’s not only Marchini. In 2022 Spring-Ford’s midfield was loaded with athletes including Carson Bogdan, Will Fish, Mike Bendowski, and others whose ability to play both sides of the field set them apart in pivotal games. Turning defense into offense was a key in PAC Final Four victories over Methacton and Owen J. Roberts, games won by the Rams 10-4 and 8-2, respectively.

As the final scores suggest, the Rams did not need a ton of offense those nights, but what they received was largely the product of transition play – a turnover in the midfield or at the top of the defensive box, followed by beating the opposition down the field and quickly creating a quality scoring chance.

No slowing down the play, no personnel changes to switch defensive specialists for scorers. Just quick, two-way lacrosse. That’s how you win in high school ball, and that’s what Spring-Ford and Marchini did better than anyone in the area.

That, plus leading the team through the first ‘normal’ lacrosse season of his varsity career, one played without cancellations, interruptions, or scheduling modification due to the pandemic. It was a ‘return to normalcy,’ and as far as Spring-Ford was concerned, ‘normal’ means capturing the league title, once they’d lost in 2021.

“I tried to follow the example of last year’s seniors, because I really looked up to those guys,” said Marchini. “So I was trying to do the same things they’d done.” “I don’t think the qualities of leadership change much regardless of the circumstances,” added Kevin Donnelly, Spring-Ford’s head coach and our 2022 Coach of the Year. “But [the class of 2022] have excelled in that area since the beginning.

“It started when they were freshmen and continued to develop. Even through missing their sophomore season, they remained strong kids. Christian isn’t the only one, but he’s a perfect example.”

Marchini was quick to share credit with co-captains Bogdan and Parker Smith, plus fellow seniors like Will Bonawitz, Brad Venella, and Chris Quigley.
This year’s class had the unique challenge of regaining the PAC title, after Perkiomen Valley snapped the Rams’ decade-long stranglehold on the trophy in 2021.

“Early in the season [in 2021], we lost to PV by one goal,” Marchini said, “and for a bunch of us seniors, it was our first time stepping on a varsity field. And we never got a second chance to redeem ourselves (the PAC Final Four was not played in the 2021 season.) So that burned underneath us, lit a fire under the team.”

A weather postponement pushed the Perkiomen Valley game to the end of the regular season, a blessing in disguise as the Rams wobbled to an 0-2 start in the non-league slate. An impressive victory over eventual District 1 finalist Downingtown East spurred a 10-1 run through the middle of the schedule, highlighted by a 12-6 victory at home against an Owen J. Roberts program that took a big step forward this year.

Marchini tallied twice that evening, but his versatility was what impressed opposing coach Mikey Zadroga of Owen J. Roberts.

“He’s impressive in so many areas – the kind of player every coach wants to have on their team,” said Zadroga. “Specifically, he operates as a one-man clear, and they don’t need to slide to him… that’s almost unheard of in high school lacrosse, but that ability makes Spring-Ford’s defense lethal.

“Athletically, if you blink, he’s past you on the way to scoring in transition. He is going to have a great career at St. Joe’s and I’m sure Spring-Ford will miss him next season.”

As much as Zadroga admired Marchini’s game, he wished he didn’t become so familiar with it, as the Rams went 3-0 against his Wildcats in 2022.
After avenging 2021’s loss to Perkiomen Valley in a 5-3 defensive struggle to conclude the regular season, it was off to the PAC Final Four for the Rams, who would dispatch Methacton before encountering OJR once more in the finals.

In what would be their signature performance of the 2022 campaign, Spring-Ford held OJR’s league-leading offense scoreless for the first 35 minutes en route to a dominant 8-2 victory. It was a five-point night for Marchini (two goals, three assists) but true to form, his postgame comments focused on the other side of the field.

“We always say, on this team we just love athletes,” said Marchini, who added three caused turnovers to his stat line.

“We put a stick in your hand, and you get after it on both sides of the field. If you can run the field, we will find a spot for you, especially in the midfield.”

The teams would meet up again in the second round of districts, with Spring-Ford making it three straight in a 11-7 victory.

“As a team, we just needed to click,” Marchini said of the 2022 season. “We knew we had the pieces, but it was the little things – communicating on defense, shot placement – we call it ‘next best play.’ After a while, you’re putting the ball in the net and things come together.”

But the end came quickly for the Rams, as Downingtown East avenged the regular-season loss by taking the Rams out in the District 1 quarterfinals. A second defeat against eventual state finalists Garnet Valley three days later brought the Spring-Ford campaign to an end one win short of a state playoff appearance.

As gutting as the high school career-ending defeat was for Marchini and the senior class, he’s been around the Spring-Ford program long enough to know the losses will serve to inspire next year’s team to reach higher.

“It’s instilled in us by Coach Donnelly, and carries down from class to class,” said Marchini. “Strive for greatness. Make the next play. It’s not individual stats, or accomplishments, that’s not the focus of anyone in our program.

“In the end, I find I’m just thankful for the opportunities this school and this lacrosse program gave me.”

“That [season-ending defeat] is the single worst day for a coach – but only one team can end the season with a victory,” said Donnelly. “But even so, you’re seeing these guys you’ve worked alongside for four years take off the uniform for the last time. When we get together and thank our seniors, that’s awfully tough. They’ve given so much to our program.”

Marchini knows the lessons and experiences from Spring-Ford will benefit him through the rest of his lacrosse career at St. Joe’s and beyond the field. He plans to major in finance and says the academic side of the university was as big a draw as the lacrosse program. “The first day – September 1, my junior year, they reached out to me and that meant a lot,” he said.

Having spent his entire life in the Spring-Ford Area school district, staying close to home was equally important to Marchini who enjoys a close relationship with his family (parents Rich and Tina). He also gave credit to his older sister Bella, a former track and cross-country runner at Shippensburg University where she studied sports psychology.

“I talk to her sometimes about the mental side of playing the game,” he said. “It’s been a tremendous help in terms of having a clear head when I take the field.”

Donnelly and his staff’s lessons and mentorship coupled with coach Bob Miller at Freedom Lacrosse received credit from Marchini for helping him gain exposure at the next level.

“Christian’s one of the best overall lacrosse players we have had come through this program, and natural ability goes a long way,” said Donnelly.

“Danny Cassidy is another player I’d mention in that group, and he ended up a short-stick defensive middie at Notre Dame.

“But what I’ll remember is how hard he’s worked during some challenging years to get himself to this point. He literally can do everything on the lacrosse field.”