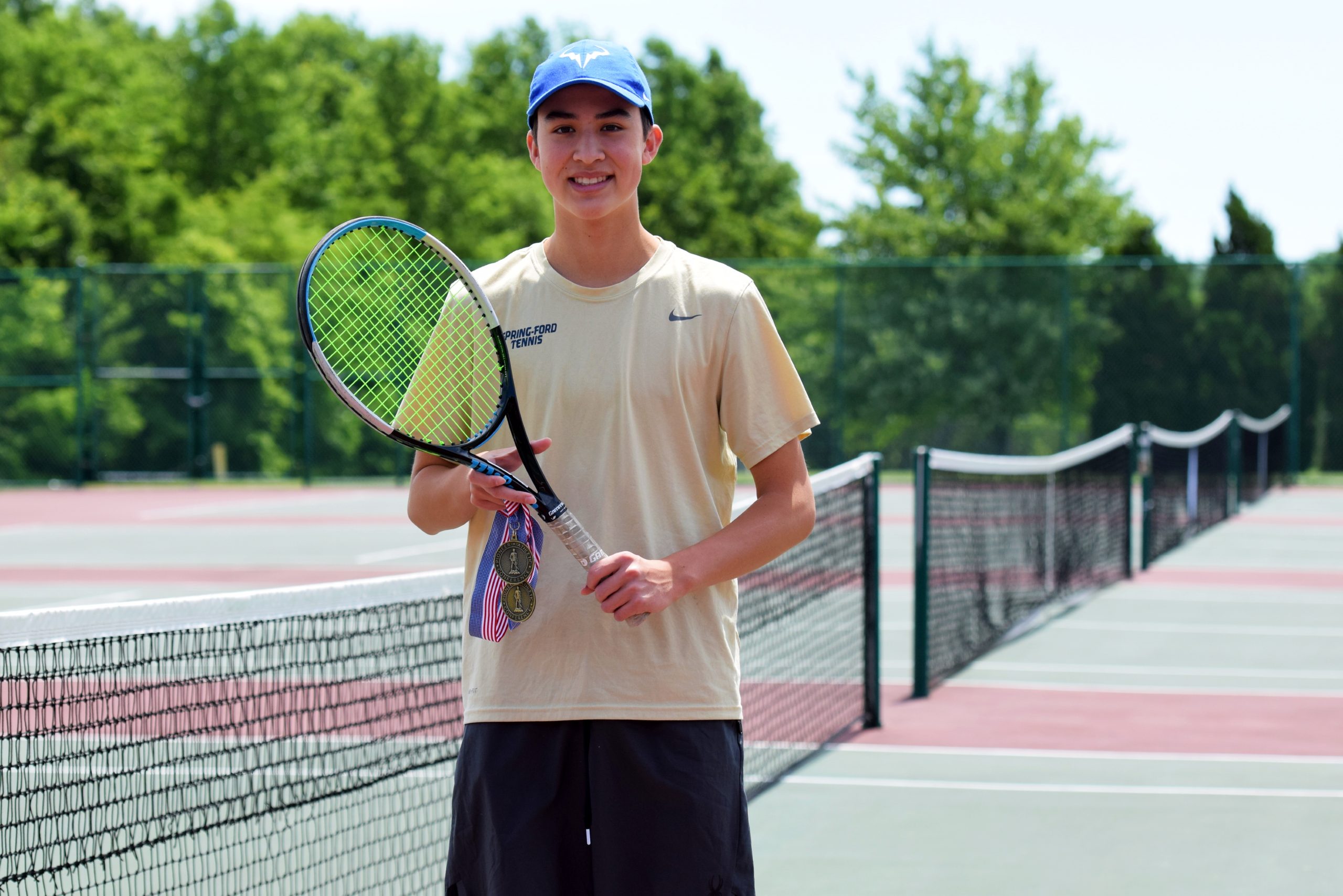 He’s been a fitting heir to the run of tennis excellence Spring-Ford perennially established more than a decade ago.

Cameron Moore became the boys program’s latest multi-year champion this spring, repeating as both the Pioneer Athletic Conference’s singles and doubles champion. Those title finishes factored prominently in Moore being named The Mercury All-Area 2022 Boys Tennis Player of the Year.

Moore’s two singles titles gives the Spring-Ford program nine champions since the 2011 season. It started with a pair by Tyler Triolo, was followed by three from Patrick Pascual through 2016 and two more by Patrick’s brother, Malchu Pascual, prior to the COVID-interrupted 2020 season.

“He was thrust into the position. But the kid’s a gamer,” said Spring-Ford coach John Brennan. “He worked a lot in the off-season.”

Moore achieved the distinction of going his entire PAC career undefeated: 11-0 as a freshman at third doubles, and 11-0 as a junior at first singles. His senior season was an encore performance with being the PAC’s singles and doubles champion.

“Even when he was a freshman, he was smart,” Brennan said. “He knew what shots to hit. He knew it all from the start.

“He’d study his games, talked about what to focus on. He outsmarted opponents along the way.”

Playing since Grade Four at Frog Hollow Tennis Club, Moore benefited from two years as a teammate of Malchu, and flourished as the Rams’ and PAC’s latest multi-year singles titlist.

“He believed in me,” Moore said of the younger Pascual, “and taught me when we were practicing.”

Through the influence of his father, clinics and lessons taken at Frog Hollow and a number of USTA tournaments, Cameron established himself coming into high-school tennis. He credited his development to Jared Morgan, his coach at Frog Hollow.

“He’s coached me all the years I played tennis,” Moore said.” He shaped me.”

But the pandemic-impacted, lost 2020 season put the responsibility of further development on his shoulders.

“I wasn’t able to play at the (Frog Hollow) club during the pandemic,” he recalled. “I practiced at the Spring-Ford and Perkiomen Valley tennis courts with family and kids from the team.”

Coming into the 2022 season, Moore had several areas of focus in his game.

“My serve, and definitely approach shots,” he said. “To get more power and depth on my groundstrokes.”

His leadership role also evolved along the way.

Moore had a relative breeze through the PAC singles tournament, losing no more than five games in any match. Off a first-round bye, he handled Perkiomen Valley’s Evan Bolton 6-1, 6-3, Pottsgrove’s Wyatt Lear 6-1, 6-4 in quarterfinals and Owen J. Roberts’ Talan Nguyen 6-2, 6-1 in semifinals.
His 6-3, 6-1 championship-match win over Methacton’s Dylan Wen contrasted with their previous encounter in the regular season. That time around, Moore needed to go three sets to prevail over the Warrior freshman.

“He gave me something,” Cameron said of Wen, who he termed his “biggest opponent” of the season. “He was tough, but I was able to pull through.”

“Dylan has a lot of weapons.” Brennan added, “but Cam got the opportunity and took it. He played defense and was consistent, serving away from Dylan’s forehand.”

Moore also established himself as a force the last two seasons when the doubles tournament rolled around. He teamed with Josh Pergine in 2021 to win the PAC tournament; and with Pergine’s graduation, Cameron found himself paired with Navein Suresh, the Rams’ second-singles player this spring.

“I had great teammates. With Josh Pergine, the chemistry was there … team spirit and motivation. Navein had skill in his ground strokes.”

“He could play singles,” Brennan said of Moore, “but he also understood doubles. It took a short time for him to develop his style.”

A lack of success notwithstanding, Moore found value from his exposure to District 1’s top players in its singles and doubles tournaments.

“It’s a level up from the PAC,” he said. ““All the kids are talented and good. It elevates your game.”

With his high-school days over, Moore will be going to Penn State to study math. He figures to stay in the sport through club play while there.
Between now and then, Moore plans to work at Frog Hollow this summer as a junior instructor.

“This will be my first time doing that,” he said.