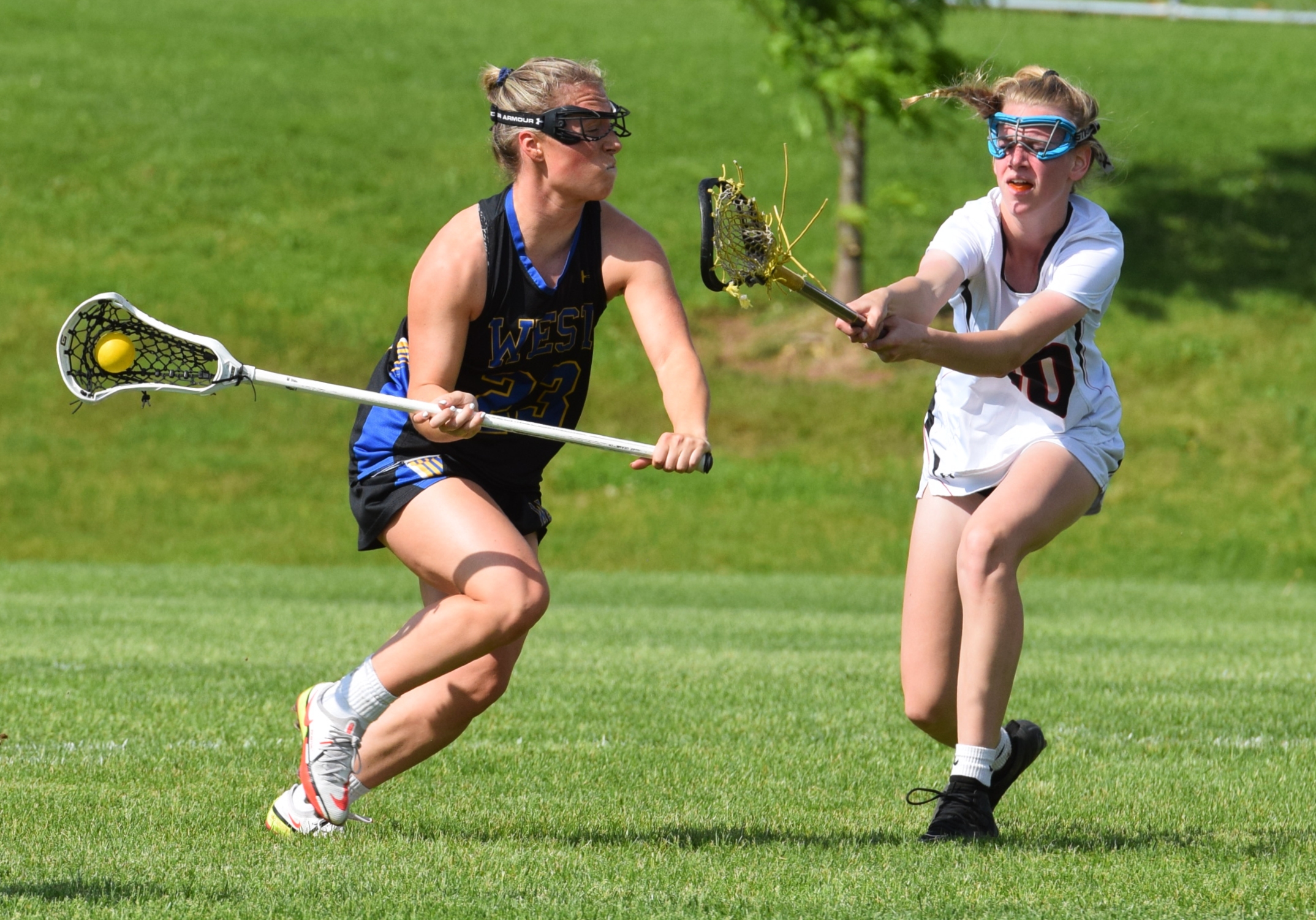 First Team
Amanda Wolfe, Sr., Unionville — The senior attack proved to be a major goal-scoring threat. She dented the net 66 times and added 42 assists with 47 draw controls, 12 ground balls and 11 forced turnovers. She was named to the first-team All-Ches-Mont Girls Lacrosse Team. She was a key cog in the Longhorns winning the Ches-Mont American Divsion title.

Ellie Udo, Sr., Bishop Shanahan — The senior midfielder is one of the versatile players in the area. She poured in 54 goals along with 28 assists, 25 caused turnovers, 22 ground balls and 17 draw controls for the Ches-Mont and District 1 champions. She was named to the USA Lacrosse All-American team. “Ellie is a program changing player who has had an impact on our team from the first day of her freshman year right through to the end of her brilliant high school career,” said Shanahan coach Kacy Small. “She has helped take our program to new heights and we are all excited to see her go on to amazing things at Brown.”

Kiki Liebezeit, Soph, Conestoga — The sophomore midfielder contribured 39 goals and 17 assists with 65 draw controls, 34 ground balls and 12 turnovers caused. “Kiki is a constant threat all over the field, whether it be causing turnovers on D, getting the draw, or creating scoring opportunities for her and her team, she played a huge role in the success of our team,” said Conestoga coach Amy Orcutt.

Kaitlyn Giandonato, Jr., Great Valley – The junior midfielder was one of the best scorers in the area. She was tops in the Ches-Mont with 74 goals. She finished with 81 points for the season. The first-team All-Ches-Mont selection has committed to play her college lacrosse at the University of Pittsburgh. One of her best games of the season was a four-goal effort against Conestoga. She was also named to the All-American team.

Sofia Fanelli, Soph. Downingtown East — The sophomore attack burst upon the scene to become an dynamic scorer for the Cougars. Fanelli checked in with 50 goals, 34 assists, 34 ground balls, and 16 caused turnovers. “Sofia has had a breakout year,” said East coach Kelli McIntosh. “She’s a very confident feeder and has a quick release on her shot. She works the crease really well and pushes the ball in transition. She plays the game with a ton of speed and intensity.”

Nickie Prendergast, Sr., Downingtown East — The senior midfielder finished with 44 goals, six assists, 2 draw controls, 33 ground balls, and 17 caused turnovers, despite missing three games. She was a first-team All-Ches-Mont League member. “Nickie has been a strong competitor on all ends of the field,” said her coach, Kelli McIntosh. “She’s a force on the draw, an intelligent defender, and very deceptive on the attacking end. She’s one of the best two-way middies in the area and an excellent leader.”

Kat Bielinski, Sr., Conestoga — The senior was a rock on defense for the state champions. Not only being a shutdown defender, Bielinski also helped distribute the ball to kick start the offense. She was named an All-American. “Kat was incredible on D for me — always marking opponents top attackers and shutting them down,” said her coach Amy Orcutt. “Kat’s greatest asset is her ability to cause a turnover, pick up the ground ball and get the ball safely to the attacking end.” Bielinski is headed to Temple in the fall to continue her lacrosse career. She was an All-American selection by USA Lacrosse.

Maddie Greco, Sr., Downingtown West — The Penn State commit uses her speed and lacrose smarts to be one of the better all-around players in the county. The first-team All-Ches-Mont League selection is also a member of the All-American and USA Lacrosse All-Academic teams. She had 47 goals and nine assists with 22 ground balls and 30 draw controls. “I have had the honor of coaching Maddie for four years,” said D-West coach Brittany Cozentino. “My favorite characteristic of Maddie is her ability to completely take over a game when she chooses to do so. She is one of the hardest working players I have had come through my program, and her leadership this season will be missed. Maddie’s future is very bright.”

Alexys McCain, Sr., West Chester Rustin — The senior midfielder compiled 56 goals to lead the Golden Knights. She also had nine assists and 42 draw controls. “Alexys is a one of a kind person and player, that I feel lucky to know and to have coached,” said Rustin coach Sarah Kropp. “She gave the coaches and her teammates her heart and soul each and every day, and worked hard to be the best she could be. We miss her presence at both the offensive and defensive side of the field, but wish her the best of luck as she continues her career at Drexel.” McCain was named the winner of the Jackie Pitts Award for community service by the Pennsylvania Area Schoolgirls Lacrosse Association.

Megan Ward, Jr., Kennett — The junior racked up 53 goals to lead the upstart Blue Demons. She headed a high-scoring unit that included Mary Carroll and Makayla Kelly. She was also very effective on the defensive end.

Paris Masaracchia, Sr., Bishop Shanahan — The senior proved to be one of the top defenders in the area. She led the backline for the Eagles and also contributed offensively. She had 95 draw controls, 89 caused turnovers, 38 ground balls and chipped in 11 goals and four assists. Her efforts were rewarded by being named to the All-American team. “Paris is the fiercest competitor I have ever seen,” said Shanahan coach Kacy Small. “Her passion and Lacrosse IQ is unmatched and she leaves an impact on every game she plays in. She is a game changing defender and we can not wait to see her impact the foundation and future of Clemson lacrosse.”

Mattie Robitzer, Sr., Unionville – The senior ended the season as one of the most solid goalkeepers in the county. She recorded 171 saves on the year. She had a save percentage of 58 percent in Ches-Mont League games.
Kaelyn Wolfe, Jr., Villa Maria — The midfielder scored 39 goals for the Hurricanes en route to being named team MVP. She added eight assists, 51 draw controls and 35 ground balls. The sparkplug for Villa, Wolfe was also named to the first team All-AACA list. Wolfe also stars for the girls soccer team.

Eileen Hewitt, Jr., Downingtown East — The junior midfielder collected 49 goals along with 29 assists (among the best in the Ches-Mont), 35 draw controls, 61 ground balls and 28 caused turnovers. She was a member of the PASLA All-Academic Team.

Coach of the Year
Amy Orcutt — Conestoga
The Pioneers rolled through the regular season and the playoffs and Amy Orcutt had a ringside view from the sideline. Orcutt guided Conestoga to an one-loss season and the Central League and District 1 titles, before moving on to the PIAA Championships. They downed Downingtown East and Radnor before getting a stern in the semifinals against Central League rival Garnet Valley.

Chole Brown’s last-second goal lifted them into the final against Manheim Township. The Pioneers jumped out to a big lead before clinching the title with a comfortable 15-7 win.

The title was Orcutt’s second with ‘Stoga. The first came in 2016.

Though the Pioneers were cruising through their regular season schedule, it was a mid-season game against Penncrest that Orcutt felt her team had put it all together and was going to be special.

“All coaches worry at the start of the season about what their teams would be,” she said. “It was against Penncrest that we put it all together. They called time out and I thought that we had played the most beautiful first 15 minutes of lacrosse I have ever seen. That’s when I knew that if we played to our potential, we would be hard to beat.”

Conestoga returns the bulk of its team back next year, including the midfield line of Chole Brown, Kiki Liebezeit and Kate Galica.