All-Delco Baseball: His future set, McGonigle aims only to ‘help my team’ 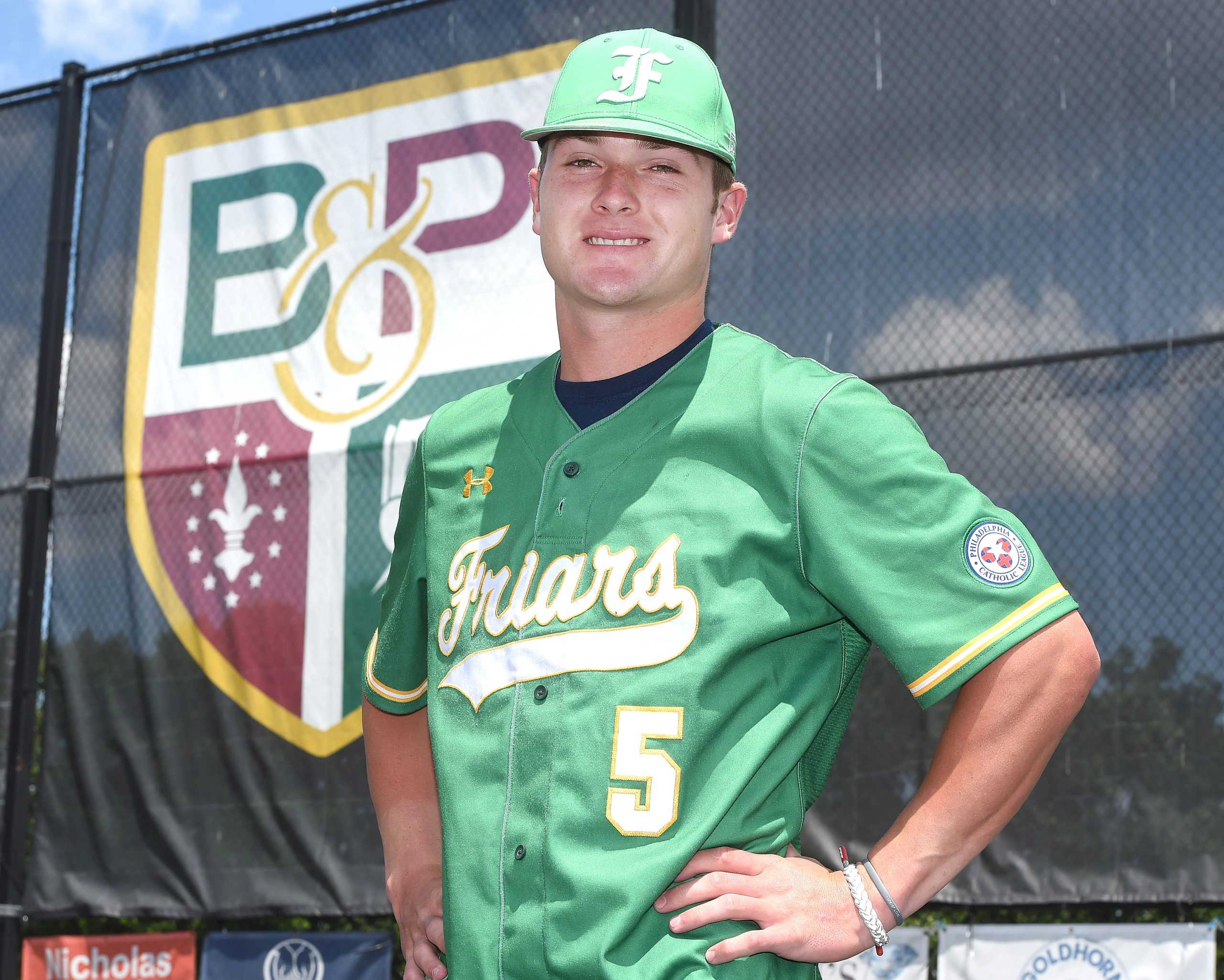 UPPER DARBY — Before a pitch was thrown, a game plan established, a defense set or a swing attempted, Kevin McGonigle was expected to spend his junior baseball season at Bonner-Prendergast under the glare of both binoculars and pressure.

A projected first-round pick in the 2023 Major League Baseball draft and already committed to Auburn, McGonigle was considered the best high school player in Pennsylvania. Friars coach Steve DeBarberie remembers the shortstop being rated No. 12 in the country by the Prep Baseball Report, with Perfect Game USA shoving in with a No. 5 ranking. A returning first-ream All-Delco and All-Catholic player, the Aldan native was a force on the national amateur circuit, a focus of every opposing coach as a sophomore and the signature player for a sitting PIAA Class 4A semifinalist.

So given the nature of short high-school seasons, East Coast weather challenges and the competitiveness of the Catholic League, the left-handed-hitting shortstop had a tremendous standard to meet.

Bonner-Prendergast’s Kevin McGonigle fields a ground ball during a game at La Salle in May. (Ed Morlock – MediaNews Group)

Despite being pitched around and challenged, McGonigle would go 41-for-81 in 27 games for a .506 average, walk 19 times, strike out just twice and club 11 home runs, several of the tape-measure variety. For all of that, and for his contribution to the Friars’ Catholic League and District 12 championships and their return to the PIAA Class 4A Final Four, McGonigle would become the Daily Times Player of the Year.

“I can’t speak of it first-hand, but it is extremely tough to do, to come out and meet all of those expectations,” DeBarberie said. “And I thought he exceeded them.”

The All-Delco team was selected by the Daily Times sports staff following consultation with county coaches.

The Friars finished 25-2 and were eliminated in the state semifinals by Holy Ghost Prep, 4-3, but not before McGonigle went 3-for-3, including a double that juiced a seventh-inning rally that slid just short. With that, he was onto a summer in the spotlight with Canes Baseball, a nationally recognized amateur program that has helped send more than 325 players into the MLB draft since 2008. Always, though, the contact hitter finds himself pulled back to Delaware County, where he first began to gain notice as a phenom in the UDHL youth program. Repelling multiple offers from prep schools and sports academies, McGonigle is thrilled to be just another Bonner-Prendie student from St. Eugene’s.

“Bonner,” he said, “means everything to me.”

That has been his passion, as it has been among his secrets to success. For while aware that he has the attention of scouts, fans and would-be critics, McGonigle committed his junior season to fixating on just one baseball number: Friars victories.

With that approach, McGonigle was able to form a secure bond with his teammates, several of whom he has competed with and against since he was 10, among them right fielder James Sousa, designated hitter Henrich and the versatile Anderson.

“It’s really fun to play with him,” said talented Friars third baseman Jaxon Kehoe. “I can’t say enough about him. He’s the best player I know in this country, and the best I have ever played with.”

The next question: Where can McGonigle improve? He has said he would like to spend the summer upgrading his arm and ability to track balls quicker, not that either seemed to be a problem during his second consecutive All-Delco season. Improvement in the margins, though, could boost his draft profile.

“I try to stay away from that stuff,” McGonigle said. “It doesn’t mean anything to me at all right now. I’m just trying to help win a state championship and keep getting better.”

Improvement has been steady for McGonigle, who been guided by his father, Kevin, a former player at Penn Wood High, and his mother, Tracy, who has told him that her great, great grandfather once played professionally with Babe Ruth.

“When I was young, I was pretty good,” said McGonigle, who has been playing since he was 3. “But in the last couple of years, I have worked harder and harder to get better, to get stronger physically and stuff like that. I just want to get better every year.”

While his value in next summer’s draft will be high – and with that, a hefty professional contract likely – McGonigle’s plan is to play college baseball, having committed to Auburn as a freshman before playing a single high school game.

“I visited there and I knew it was home,” he said. “The coaching staff is unbelievable, and you feel like family. It’s just an awesome place to be and I am ready to play. Also, you can’t get better than the SEC.”

Opportunities, McGonigle will have. First, though, will come his senior season at Bonner, and almost certainly an even steeper hill of expectations.

“It will be exciting,” said DeBarberie. “There will be a lot of eyes. It will be cool.”

That’s the anticipation for the .506-hitting All-Delco Player of the Year, before a pitch is thrown, before another swing is attempted.

“He just keeps getting better and better,” DeBarberie said. “And we’ll see where it takes him.”