Whippets’ Straub is Daily Local News’ Player of the Year 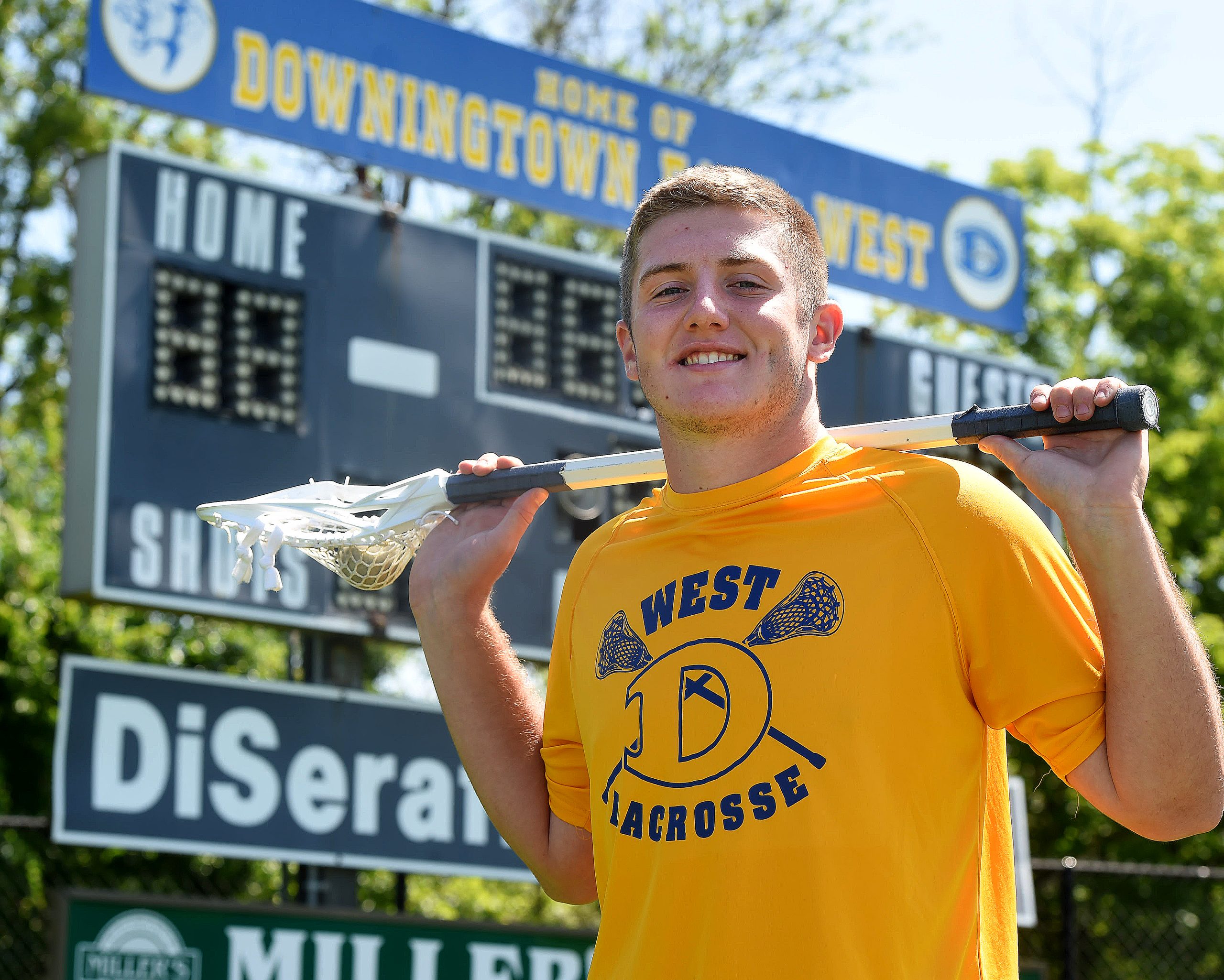 DOWNINGTOWN >> Nothing happens 85 percent of the time by accident.

That is the success rate on face offs authored by Downingtown West senior Michael Straub this spring, and none of it was by happenstance. The 2022 Daily Local News Boys’ Lacrosse Player of the Year was asked how anybody could win 222 of 262 attempts from the dot, and his answer is simple: out-work your opponent.

“I am always pretty nervous for the first faceoff,” Straub acknowledged. “After that, all of the unknown goes away.

“Even if I got smoked on the first one, I know what I need to do know. I just trust in my preparation, knowing that I put in more work beforehand than the other guy.”

Straub started playing lacrosse back in second grade, and many of his very early teammates have been with him ever since, including Whippets’ standouts like Bret Bergey, Kevin Lundmark and Jackson Chiappa.

He immediately fell in love with the game because it was a combination of two of his favorites. It featured the movement of basketball and the physicality of football.

In third grade Straub started playing for Philadelphia Freedom, an elite travel lacrosse program. His coach, Bob Miller – who directed the Lionville Youth Association for a decade – is also the co-owner of the Freedom along with former Bishop Shanahan coach Kevin Goforth.

After seeing him go against some of the better age group players in the region, Miller consulted Straub’s dad Bill.

“He said, ‘right now, we don’t see (Michael) being a midfielder on this team, but we see potential on face offs,’” Straub recalled.

That was when the seed was first planted, and by eighth grade, it began to bloom. Straub was winning a lot of face offs and he started taking the task more seriously. That was when he began involvement with the Philadelphia Faceoff League.

“And at that same time, I kind of had a growth spurt,” Straub recalled. “That’s when I came to the realization that you can also be a pretty darn good midfielder too.”

As his expertise flourished, there was only one thing that Straub wanted more than being an elite faceoff guy. He wanted to develop into more than just a FOGO (face off, get off) — the quest to become an all-around lacrosse player who didn’t automatically come off the field after his job in the faceoff circle was over.

“For years my dad has been telling me to be patient,” Straub recalled. “That I will grow into it and it will all pay off. Sometimes that’s hard to see when you are a kid. Looking back, it all worked out.”

For his senior season in ’22, Straub amassed 27 goals, dished out 33 assists and gobbled up 173 ground balls. And coaches around the league respected his all-around game enough to select him the Sandy Phillips Ches-Mont league MVP.

“Every team – be it last place or first place – has that one player who just has that one intangible that is so important to the make-up of a team,” said his coach Billy Davis. “It’s a player who leads and contributes on and off the field and who is not afraid to be the vocal leader – to do the hard work.

“Michael was our all-around leader that everyone on our team looked up to and respected. He understood his role and got the most out of his minutes.”

It took years to reach this pinnacle, however. As a freshman, Straub won 65 percent on faceoffs, and added six assists and a goal. And then his sophomore season was cancelled due to the pandemic.

“I was very prepared for my sophomore season, so to have that taken away was pretty hard,” he said. “I felt like I was going to have a good year considering all that I had done in the offseason.

“I had seven points as a freshman, and came back with 65 as a junior. That’s when I knew I could do it – be a good faceoff guy and also be an effective midfielder.”

Along the way, Straub received plenty of instruction, hands-on experience and support at the Philadelphia Faceoff League. He looked up to some of the NCAA’s best, including Peter LaSalla of Virginia. And he became friends with former West Chester Henderson star Luke Wierman, who is an All American at Maryland.

“They are able to impact on the faceoff, but also have an impact offensively,” Straub pointed out. “They are not a typical FOGO where they win the faceoff and come right off the field.

“The biggest help was the Philly Faceoff League. I’ve not only learned a lot, I’ve made friends there and it’s allowed me to take reps with high-level Division I faceoff guys. And I knew that in high school, I would never square off against anybody who is better than they are.”

More than 10 times during the 2022 season, Straub was able to win a clean faceoff, race down the field and score.

“Not only is something like that great for our team, it’s deflating for the opposition,” he said.

“I give credit to our coaches. They kind of let me freelance, where I do my thing on face offs and then be the main ball carrier. I’d like to think I have good vision, and can find guys open, and also go to the rack and score. I thought I flourished when I had the ball in my stick.”

Now 6-foot-2, 215 pounds, Straub was the unquestioned leader of a Downingtown West squad that went 16-3 overall. The Whippets finished as the Ches-Mont runner-up, but were knocked out of the district playoffs early.

“I’ve never been on a team that was this close,” he said. “That’s what made the season ending the way it did so hard. We obviously didn’t want to lose, but we just wanted to be able to come to practice the next day.

“The true unity and closeness of this team felt like more than just trying to win games.”

An obvious Division I college recruit, Straub has signed to play at Delaware, where his mom, Julie, and his grandparents attended.

“Delaware has a very successful lacrosse program,” he added. “They made the quarterfinals this season and finished ranked No. 11. They also have a designated faceoff coach, and it doesn’t hurt that my parents can come to all of the games.”