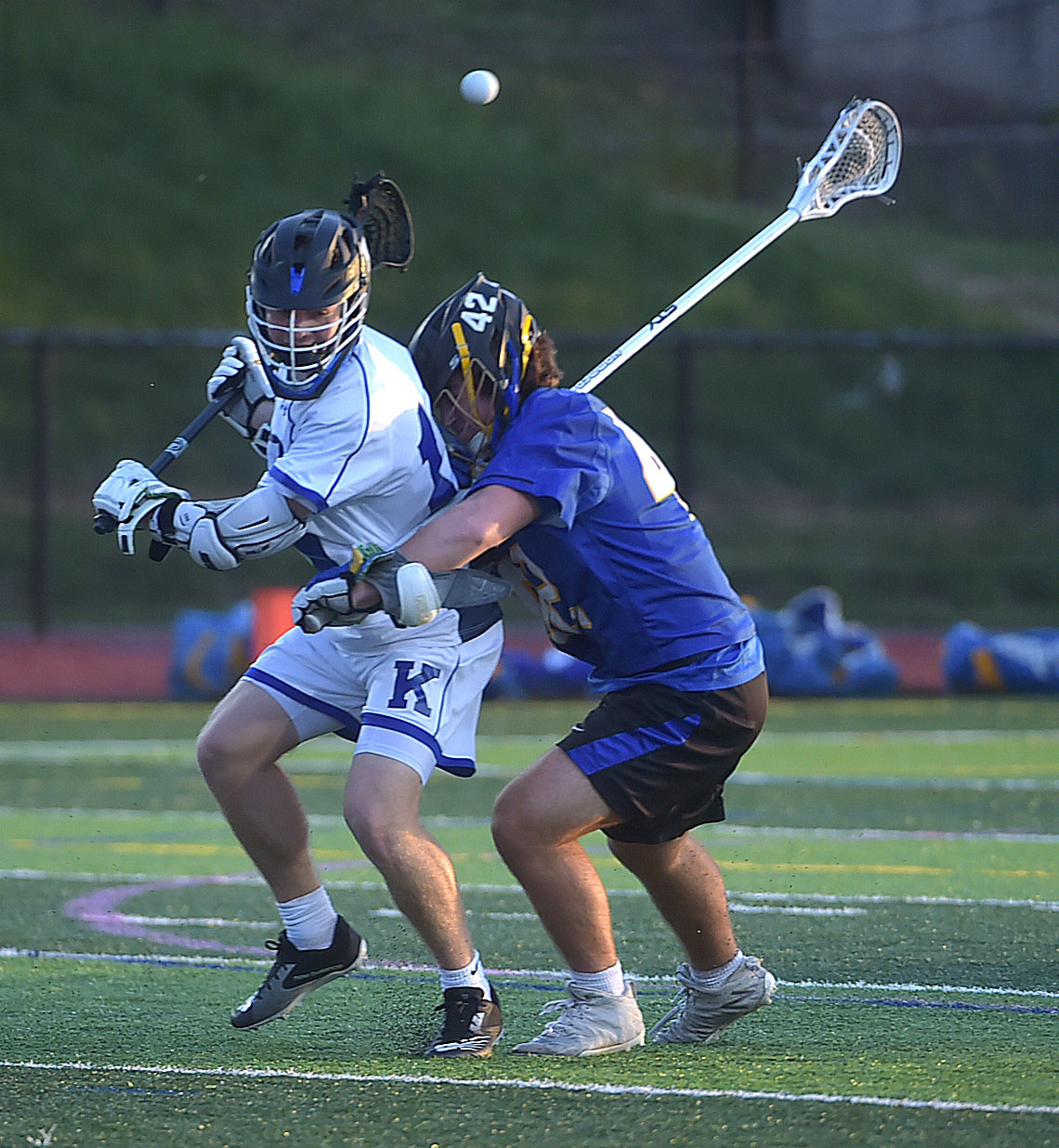 A.J. NIKOLIC, Jr., Malvern Prep – Friars’ head coach John McEvoy believes that the Paoli native is the best high school lacrosse player in Pennsylvania. While leading Malvern Prep to the Inter-Ac league crown, he poured in 45 goals and assisted on 32 others. All League, All State and All American, Nikolic is an exceptional midfielder, but was moved to attack and flourished. “He played attack simply out of necessity,” McEvoy said. “It is very challenging to shift from a midfielder into a traditional attackman, but A.J. was able to do that.”

JAKE FREEBERY, Sr., Kennett – Perhaps the area’s top offensive distributor and facilitator, Freebery is moving on to play collegiately at St. Josephs. He led the county in assists with 69, added 45 goals, and is the Blue Demons’ all-time leader with 285 career points. He became Kennett’s third All-State honoree this spring. “Jake was, without a doubt, our MVP,” said his coach Bob Allvord. “He is one of the best I’ve ever coached, and one of the Kennett’s best ever.”

PATRICK REILLY, Sr., Conestoga – One of the most skilled and dangerous attackmen in the area, Reilly was the Pioneers’ offensive MVP. The 5-foot-11, 190-pound lefty led ’Stoga with 49 goals and added 19 assists. A team captain and two-time first team All-Central League selection, Reilly has committed to play for Division I Bucknell. “Patrick has an explosive first step and played multiple positions for us,” said Pioneers’ head coach Brody Bush.

BRYSON KOLINSKY, Jr., Downingtown East – The top goal scorer and point getter for the Cougars’ high octane attack. He scored 55 times and added 26 assists to go with 26 ground balls. Headed to play for Delaware when his high school career ends, Kolinsky was an all-league and all-state honoree. “His ability to dodge from all points in the offensive zone shined throughout,” said his coach Joe Horvath.

DAYLIN JOHN-HILL, Jr., Westtown – A dangerous and skilled lefty attacker, John-Hill is of Native American heritage who grew up in Fort Erie, Canada. John-Hill comes from a large lacrosse family, including an uncle who played for several professional teams in the National Lacrosse League. He started playing at age three, and this spring he amassed 46 goals and 35 assists and was a first team All-Central League pick. “His vision and finishing have always been at an elite level,” said his coach Desi Gonzalez. “But his lacrosse I.Q. and his dodging have taken leaps and bounds this year.”

JOE SHERIDAN, Sr., Malvern Prep – The West Chester resident is ranked as one of the top handful of midfielders in the state and has committed to play in college at Richmond. This spring he scored 37 times and added in 17 assists. “Those stats put him in elite company,” sad his coach John McEvoy. “Joe is a versatile midfielder who can create his own shot off the edge with his right or left hand. He can create for others, facilitate the offense, get loose balls and get back on defense.”

BO HORVATH, Jr., Downingtown East – A two-way force for the Cougars, Horvath logged the most minutes on the team and responded with 36 goals, 14 assists, 67 ground balls, 92 clears and 24 caused turnovers. The Player of the Year on an East team that went unbeaten in league play, Horvath was a first team All-Ches-Mont and All-State pick as well as a U.S. Lacrosse All-American. Has committed to play at Lehigh. “Bo is the consummate do-it-all midfielder, helping the team gain advantages within the offense, defense, special units, and in between the lines,” said his coach and dad, Joe Horvath. “He consistently drew the opposition’s top defender.”

MAREK SEAMAN, Jr., West Chester Rustin – Already committed to play lacrosse at West Point, Seaman was the Knights’ do-it-all, two-way midfielder. He led Rustin in goals (56) and assists (37), and is a two-time all-league and all-state selection. “Marek continued his scoring pace from his sophomore year and now has 172 career points,” said Rustin head coach Kevin Philibin. “He improved his passing during the off season.”

KEVIN CARSON, Jr., Unionville – A key two-way catalyst that helped power the Longhorns to the district semifinals and a berth in states. Carson scored 32 goals, dished out 21 assists gobbled up 61 ground balls, and was particularly effective in the postseason. “Kevin is a fantastic two-way midfelder that is strong in transition, passing, dodging and scoring from all area of the field,” said Unionville head coach Steve Holmes. “He was an absolute workhorse for us,” added assistant coach Ian Allender.

THOMAS VENZIE, Jr., Downingtown West – Venzie scored nine goals and assisted on two others, but he thrived all over the field on defense and in transition for the Whippets. Venzie scooped up 99 ground balls, notched 58 takeaways and is a two-time all-league and Hoover Ground Ball Award recipient. “Thomas is one of the best players I’ve ever coached,” said West’s head coach Billy Davis. “He shines with his play inside the 30s. Whether on the wing, ridding t the midline, or pushing transition on a fast break, he always found a way to get his team possessions.”

MIKE WAITE, Jr., Downingtown East – A relentless defender and effective transition player, Waite is a first team pick at the league and state level. He scored six goals, had four assists, notched 71 ground balls, forced 28 turnovers and executed 42 clears. Has already committed to play in college at St. Josephs. “Mike covered the most threatening opposing midfielder every game and was a tremendous link between offense and defense,” his coach Joe Horvath said. “His competitiveness was unmatched and his ability to disrupt the opposition’s plan was a major reason for East’s undisputed Ches-Mont championship.”

NOLAN O’HARA, Sr., Coatesville – An unsung hero for the Raiders, O’Hara was a premier short-stick defensive midfielder in ’22 – tops in the Ches-Mont. A fine football player, he excelled in his first season as a high school lacrosse player, earning first team all-league honors. “As an on-ball defender, Nolan’s athleticism and positioning allowed him to shut down offensive players,” said his coach Dan Ellis. “And his ability to win ground balls and clear the ball became major assets as our season progressed.”

LIAM QUINN, Sr., Downingtown East – Physically imposing at 6-foot-6, Quinn was a two-year captain and team leader for the Cougar. He amassed 32 clears, caused 10 turnovers and had 16 ground balls. A U.S. Lacrosse Academic All American, Quinn has signed to play at St. Josephs. “Liam’s commanding presence in the defensive zone led to countless defensive stands,” said East coach Joe Horvath. “His ability to stick to fundamentals while taking the necessary risks to force turnovers was invaluable.”

CONNOR JUNG, Sr., Kennett – A big, physical athlete, Jung anchored the Blue Demons’ defense and was unquestionably a team leader. He led Kennett in caused turnovers, ground balls and clears, and has committed to Virginia Military Academy to play Division I lacrosse. The hard working Jung was a first team all-league pick. “Opposing coaches would always comment on how hard and tirelessly Connor played until the end of the game,” said his coach Bob Allvord.

LUCCA DiBARTOLOMEO, So., Malvern Prep – A playmaking impact defender? A rare commodity in lacrosse, but DiBartolomo fits the bill … and he’s just a sophomore. In 2022, he earned All-Inter-Ac, All-State and All American recognition. “He is like a golden retriever when the ball is loose between lines,” said his coach John McEvoy. “Outside of his abilities off the ground and running the field, Lucca is a bit stronger on the ball than off. He can run with just about everyone and is constantly making ball carriers uncomfortable.”

JAKE LAW, Jr., West Chester Rustin – One of the Ches-Mont’s top defenders, Law forced 44 turnovers and grabbed 43 ground balls. He was the anchor of a Knights’ defense that limited opponents to 6.4 goal per game, and had a clearing rate of 86 percent. “Jake is one of the most physical defenders in the league who plays really well at the point of contact,” said Rustin head coach Kevin Philibin. “He is a big communicator who helps command the defense.”

PATRICK JAMEISON, Jr., Conestoga – A four-star recruit that is headed to Duke on an lacrosse scholarship, Jameison still has a high school season to play and is already considered one of the very best keepers to come out of the ’Stoga program. He is a two-time team MVP, a two-time All-Central League selection, a first team All Stater and a U.S. Lacrosse All American. He amassed more than 200 saves in ’22. “In my opinion, Patrick is the best goalie in Pennsylvania,” said his coach Brady Bush.

IAN KIM, Sr., Conestoga – Going up against top-notch opponents from one of the state’s most challenging schedules, Kim won 197 out of 283 face offs in 2022, for a success rate of 70 percent. He also led the Pioneers in ground balls, and was an academic All American. Kim has already signed to play Division III lacrosse Williams College in Massachusetts. “Ian is the hardest working player on our team and a leader by example,” said his coach Brody Bush.

In just his second season at the helm, head coach Joe Horvath guided the Downingtown East boys’ lacrosse program to unparalleled heights. As a result, he was a slam-dunk selection as the Daily Local News’ 2022 Coach of the Year.

The Cougars ran roughshod over the rest of the Ches-Mont, going 12-0 and winning the outright league title. East then avenged one of its two regular season setbacks by blasting Spring-Ford in the district quarterfinal, and advanced all the way to the District 1 Final before falling to the defending state champs from Radnor.

The Cougars bowed out of the PIAA Playoffs in the opening round, but the upward trajectory of the program has now been established. Led by his son, Bo, and other underclass standouts like Bryson Kolinsky, Sam Barton, Mike Waite, Brady Quinn and Evan Milon, East looks to be an emerging force moving forward.