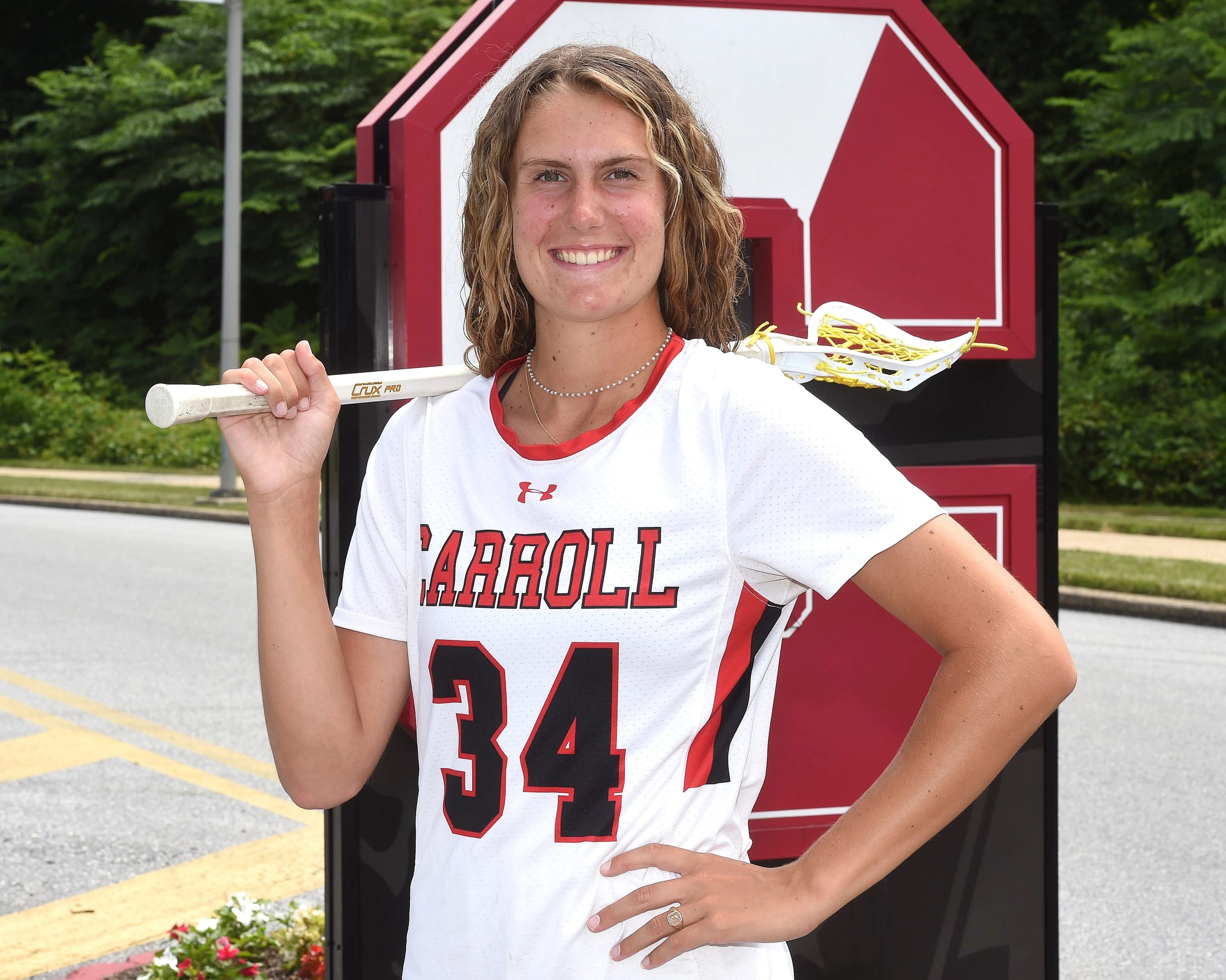 If the crazy good stickwork and next level lacrosse IQ don’t take your breath away, the laser-guided shot will do it.

But what Archbishop Carroll senior attack Kiley Mottice does better than anything is win. Mottice and the Patriots rolled to a 24-0 mark and a second straight PIAA Class 2A state crown this spring wearing the bull’s eye from winning it all in 2021.

“She’s incredibly quiet but she’s so motivated and such a good leader by example,” Archbishop Carroll coach Lorraine Beers said. “She can get loud, but she has so much respect of the team. It’s unique. Not that we don’t get great leaders. Each year you get somebody who’s good. But Kylie, I think, touches everybody from the JV player who barely gets in, all the way up to the really good players on varsity. So, they all really respect her and just what she’s accomplished as a player, because she is so good.”

The impact the 5-9 Mottice has on games is a lot like the influence Steph Curry had with the Golden State Warriors on their run to the NBA championship this spring. Curry was the focal point of the attack as he stretched the defense with his insane three-point shooting range.

The Patriots’ offense almost always went through Mottice, even when, as in the PIAA semifinal and final, she was triple-teamed for large stretches. Mottice scored team-highs this season with 62 goals, 35 assists and 97 points. In three high school seasons, she produced 158 goals, 129 assists and won 87 draw controls. Beers figures you could add plenty more if the game was scored like hockey, since Mottice frequently makes the pass that sets up the assist.

The University of North Carolina signee, whom Beers calls the most accurate shooter she’s ever had, is the Daily Times Girls’ Lacrosse Player of the Year.

Seniors dominate the first team, taking up 10 spots. Natoli and Valerio are juniors, with Yancey as a sophomore. Mottice and Stankavage repeat from last year’s team. The All-Delco team is selected in consultation with area coaches.

To give you an idea of how dominant Mottice was with the Patriots, Beers invokes another jaw-dropping talent from Carroll: Sam Swart, who just completed a stellar career at Syracuse.

“Sam is amazing, and both girls are super talented in their own right,” Beers said. “And I’m sure Kiley will have a great college career like Sam did. Sammy is just your pure runner. Your thoroughbred. She’s a girl that beats everybody up and down the field and has endurance. She’s a natural lefty. She can score on you and did a lot of that in high school.

“Kiley in high school can play midfield. We play her at attack, and she is a pure shooter and finisher. She’s like your three-point shooter. She’s your Steph Curry. She is throwing balls from outside the eight, and just firing them like rockets past the goalies, top shelf. And she is equally proficient left- and right-handed. I’ve never had anybody with her shooting accuracy.”

Mottice completely understands the 3-point shooter analogy. While she kidded that she’s a fan of LeBron James, her original hometown being Cleveland, “I’ve seen Steph take a lot of shots from the 3-point line.”

“It definitely helps to be able to shoot from that far away and add that power,” Mottice said. “Not a lot of players can shoot from far out and that opens the field. It gives me an advantage to have a different type of shot. I think a lot of players are faster than me, so I think just working on my shot and making sure I can hit any corner at any time has given me an advantage over other players.”

Anyone fortunate enough to watch the Patriots in their pre-game warmup glimpsed Mottice’s crafty stick work, putting on a clinic firing accurate behind-the-back passes and shots.

“I actually learned it when I was at Syracuse camp when I was in eighth grade,” Mottice said. “It’s a lot of time spent in the backyard with like 50 balls, behind the back and trying to get the motion, the muscle memory down to be able to use it in a game. And I’ve scored a couple with it.”

Mottice also makes nasty, look-away passes with fellow senior Talago, who also is blessed with elite stick skills, the vision to see the angles and that high lacrosse IQ that Beers raves about.

“Kiley and Emma can work the two-man game and also the crease,” Beers said. “They can go left and right and juke people. And then you get that third girl coming down the middle, like that beautiful play by Brooke Hippert and Machaela Henry in the championship game. Both got great goals off of Emma and Kiley dishing into the middle.”

The championship game was one of Mottice’s finest moments as a leader. The Patriots were in trouble at the intermission, trailing Twin Valley by two goals. It would have been three had Mottice not buried a shot before time expired on the first half. It was the moment of truth for the team’s upperclassmen.

“Beers was just very calm at the half,” Mottice said. “She’s never really worried.  But I think that just me and Emma and Catie (McConaghy), we were just like ‘We’ve been down before. We were down in the state championship last year. This isn’t anything new.’ And we just didn’t want to play like we did in the first half because we knew we were so much better. And I think it was just we wanted to put everything out there and finish our season and our senior years as strong as we can.”

While fans counted down the dying seconds, somewhere between 3, 2 and 1, Mottice’s lacrosse life flashed in front of her. Two state championships. First girls’ team to go undefeated and win a state title. A spot at UNC, the pinnacle of women’s lacrosse. Teammates, coaches, and lifelong, unconditional relationships.

“It was just an amazing feeling,” Mottice said. “I think in that moment I just was extremely grateful and thankful for not only this season but to be able to even go to Carroll and have Beers, and Jess (Lake) and Brooke (Watson) and Pete (Hewitt) as my coaches, who are just the most amazing people. I think it was a moment of gratitude in those final moments to be able to think about how nobody has ever had an undefeated season and made it to this point and had two back-to-back championships.”