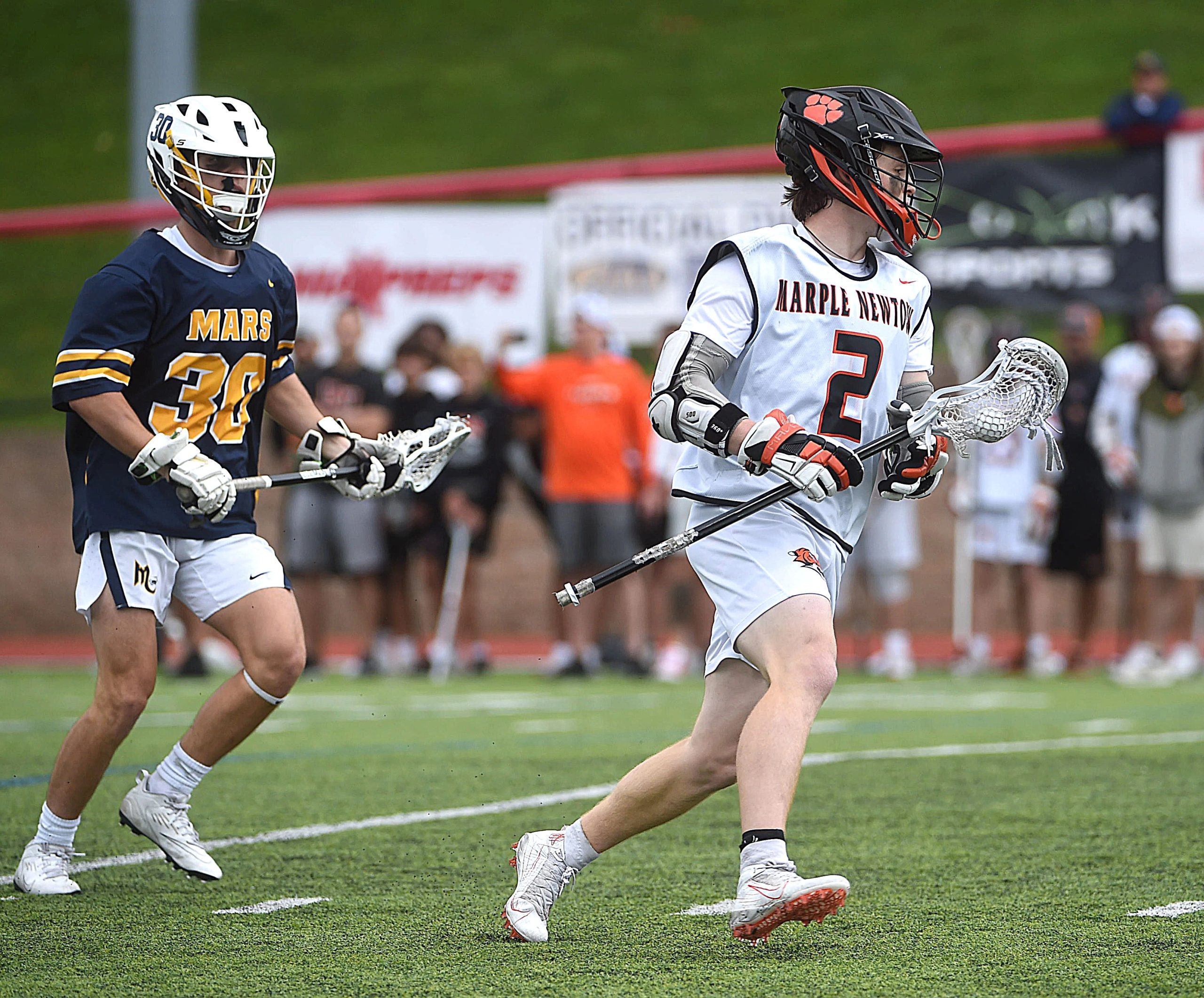 Charlie Box looks for an opening as Marple Newtown crashed into Mars in the PIAA 2A State Championship. (PETE BANNAN - DAILY TIMES)

In addition to Players of the Year Max Busenkell of Garnet Valley and Ryan Goldstein of Radnor, the rest of the All-Delco team includes:

Teddy Malone, Haverford School: Malone led the Fords to the Inter-Ac final, the biggest threat in a deep and varied attack. The senior was first on the team with 36 goals, second with 27 assists and first with 63 points, as the Fords went 14-6 and lost in overtime to Malvern Prep in the final. Malone was the Fords’ most consistent producer. He tallied four goals and two assists in a pair of games, including a win over Maryland’s Bullis School. He added three and two to beat Garnet Valley in early April and a hat trick against Episcopal Academy. He added a goal and three assists in the teams’ first meeting. An All-State selection, Malone is a Harvard signee.

Tristan Whitaker, Episcopal Academy: EA’s depth in attack and midfield made it difficult for any one individual to stand out. But when Whitaker contributed seemed to matter as much as how much. The senior Vermont signee was first on the Churchmen with 41 goals, second with 16 assists and first with 57 points. It’s hard to argue with what he did in a win over Malvern Prep: Five goals in a 6-5 victory over the eventual Inter-Ac champ. Whitaker, also a soccer All-Delco, scored multiple goals in 10 of the first 11 games, including hat tricks against national powers Severn School and Avon Old Farms. He added two goals and three assists to beat Penn Charter and five goals and a helper in the Inter-Ac semifinal loss to Haverford School.

Charlie Box, Marple Newtown: Box has helped raise Marple Newtown lacrosse to a new level. He’s the program’s first All-Delco since 2003. A two-way dynamo whose skill is only exceeded by his tireless motor, Box powered the Tigers to the District 1 Class 2A championship and the PIAA final. Box finished with 70 goals, 53 assists and 123 points. He finished fourth in Delco in the former two categories this season and third in the latter. Box’s stat lines border on the ludicrous. Five goals, two assists against Penncrest in the regular season. Seven and one vs. Coatesville. Five and three in blitzing Bishop Shanahan in the first round of districts. Five goals in the first round of states, then four and three in dumping reigning champ Allentown Central Catholic in the second round. He also supplied two-way play and even faceoffs as needed. An All-American and football All-Delco, Box will play lacrosse at Cornell.

Andrew McMeekin, Episcopal Academy: McMeekin missed six games but still collected eight goals and 14 assists. Those are massive totals for a faceoff guy even had he played a full season. It’s a testament to McMeekin’s centrality to the Churchmen in an 11-7 season. And that’s as one of the best faceoff men in the country in his class, with a football player’s physique to win at the X cleanly or on the ground afterward. It all adds up to immense value to EA. McMeekin had two goals and two assists in the opener against St. Stephen’s and St. Agnes and two and three against Westtown School. An All-American pick, McMeekin is a Princeton signee.

Colin Hannigan, Springfield: When the season began, Hannigan was a St. John’s signee. One season, 19 Springfield victories and more than 300 faceoff wins later, Hannigan is an All-American headed for the University of North Carolina. Hannigan’s growth has been explosive, one of the most valuable pieces in Springfield’s run to the District 1 and PIAA Class 3A semifinals. He scored eight goals and five assists. At the X, he delivered some utterly dominant performances. He was 11-for-13 against Conestoga in the regular season, then 13-for-14 in districts. A 17-for-17 outing in the second round of districts, a 19-for-23 state quarterfinal and a 17-for-22 outing against Garnet Valley early in the season were among the many highlights.

Ryan O’Connor, Springfield: The senior LSM is just a defensive menace. Going near O’Connor in possession is an invitation for him to separate you and the ball. He’s got next-level athleticism, an active stick, near error-free coverage on groundballs and outstanding lacrosse smarts to make plays on the defensive end, plus the open-field speed and stick skills to contribute offensively. With O’Connor as the ringleader, the Cougars allowed just 4.88 goals per game, going 19-6 to reach the PIAA semifinals. O’Connor added five goals and four assists (including two and one against Lower Merion). An All-American and two-time All-Delco (in addition to being a hockey All-Delco), he’ll continue his lacrosse career at Penn State.

Will Costin, Haverford School: The senior defenseman led a solid Haverford unit against a difficult regional schedule and one of the toughest leagues around. Haverford won 14 games and allowed 7.85 goals per game, in a league where scoring tends to get elevated. Costin did his best to clamp down on that. The All-American selection drew the toughest matchup on a nightly basis, anchoring a generally young defensive unit with his excellent defensive instincts and physicality. Costin helped the Fords beat archrival Episcopal Academy three times, their only losses from the first week of April on coming at the hands of Malvern Prep. Costin also scored a goal (against Malvern Prep) and added an assist. He’ll join O’Connor in the defense at Penn State.

Will Gallagher, Radnor: Radnor’s defense is a team effort, which encompasses not just the four poles or the seven defensive players (including the goalie) but the entire team. Despite that team approach, Gallagher shined as the most important cog. The Notre Dame signee emerged as a junior on Radnor’s state title campaign. As a senior, he took the reins to lead the Raptors to a 24-2 season, the Central League title, the District 1 Class 3A crown and the PIAA Class 3A championship yet again. Radnor allowed 5.1 goals per game, a slight rise from the otherworldly 3.9 in 2021. Only one team – Long Island power Garden City – hit Radnor for double-digit goals. They allowed an average of 4.3 goals in eight postseason games and pitched two shutouts on the season. The masterstroke may have been the 8-2 shackling of Springfield in the state semifinal, or the 14-3 demolition of Downingtown East in the district final, or Gallagher shutting out Busenkell in the state final.

Sean Gallagher, Garnet Valley: In a year of exemplary defenders, Gallagher more than belonged. The football All-Delco will probably find himself as an LSM at the United States Naval Academy, given his speed in the open field and his outstanding athleticism. But as a close defender to fit the team’s needs in 2022, Gallagher showed he has the defensive bona fides to do the job in coverage. The Jaguars won 19 games and made their first PIAA final, fighting through playbacks in districts and upsetting La Salle in the first round of states. Gallagher was the steadying defensive presence, and despite the energy he expended defending, he still contributed 11 goals (including a staggering four against Strath Haven and two against Penncrest) and six assists. Gallagher was voted an All-American by the coaches.

Chuck Cacciutti, Haverford School: The senior two-time All-Delco remains the most talented shot-stopper in the county. This year, he helped a relatively youthful Fords team win 14 games, with half of their losses coming to Malvern Prep. Cacciutti had a handful of big performances during the season – 15 saves in a 9-5 win over Germantown Academy, 15 in an overtime loss to Malvern, 13 in a 14-6 win over Penn Charter. Cacciutti’s career will continue at Penn.