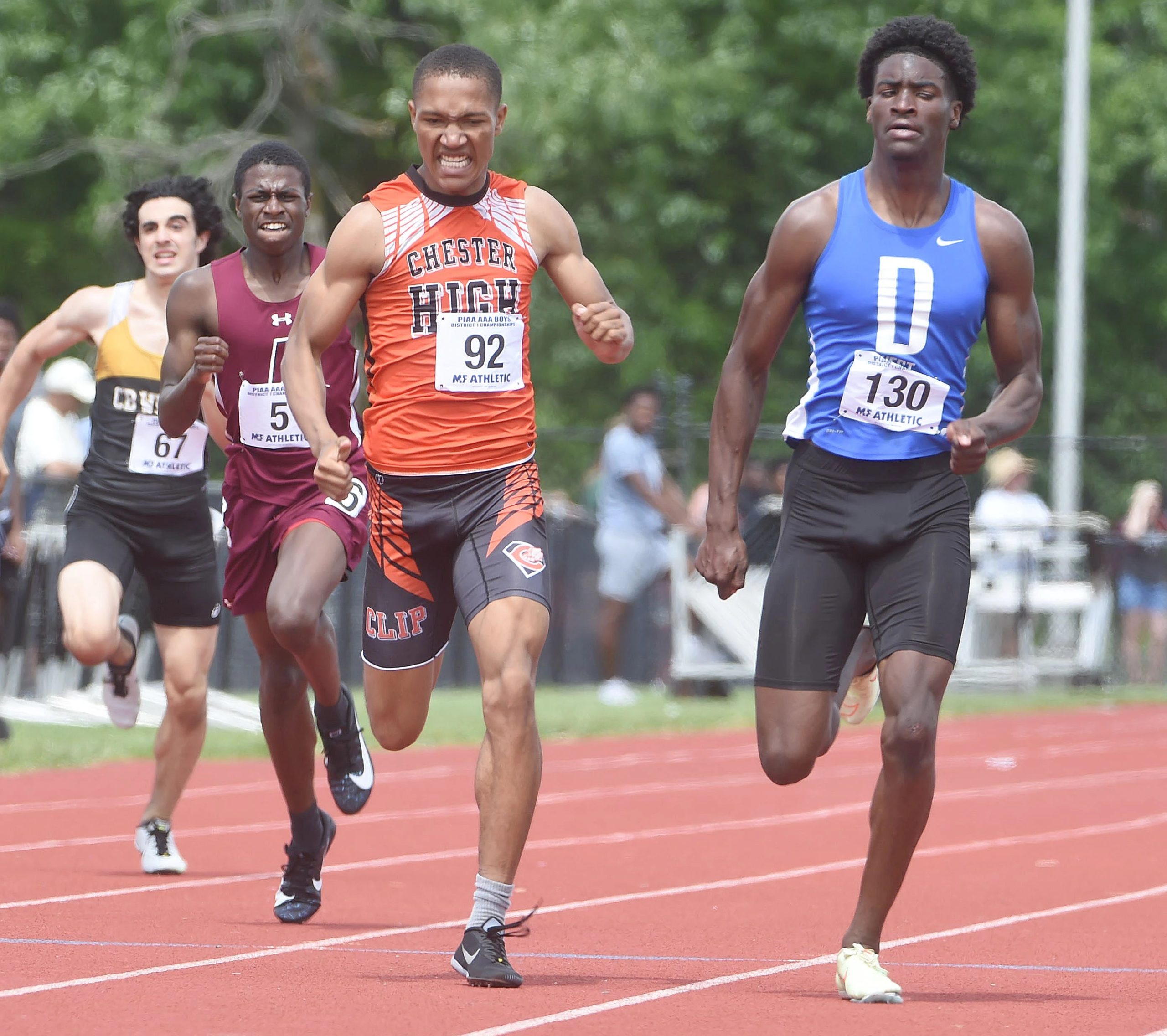 Walton Garnett of Chester, left, finished fifth in the 400 at the District 1 championships to earn a spot in the PIAA championships. (Pete Bannan/MediaNews Group).

In addition to Athlete of the Year Daniel Munro from Penncrest, the All-Delco team includes:

Neo Vossschulte, Episcopal Academy: A big man with speed, the 6-4, 205-pound senior was the top sprinter in the county this season, ranking first in the 100- and 200-meter dashes while also competing on the 4 x 100- and 4 x 400-meter relays for the Churchmen. He took third in both the 100 and 200 at the Inter-Ac Championships and set the school record in both events (10.83 in the 100, 21.90 in the 200). He also was on the 4 x 100 squad that set a school record. Also a standout in football, Vossschulte will attend the United States Military Academy at West Point.

Walton Garnett, Chester: After just missing qualifying for the PIAA Class 3A championships in the 400 as a sophomore, Garnett vowed to make it to Shippensburg as a junior. He did, in two events, the 400 and the 4 x 400 relay. He finished 10th in the 400 at the state meet after taking fifth at the District 1 championships. Garnett, a two-time All-Delco, earned three wins in the 400 during the season, taking first at the Haverford Invitational, the Coatesville Invitational and the Delco championships. Garnett helped the Clippers to a fourth-place finish in the 4 x 400 at the district championships and ninth at the state meet. Haverford’s Patrick Lawson celebrates as the Fords win the 4×800 relay in a time of 7:53.99 in District 1 Class 3A Championships at Coatesville. (PETE BANNAN – DAILY TIMES)

Ethan Fingerhut, Haverford: The 2021 Daily Times Runner of the Year in cross country carried that success into the indoor and outdoor track seasons. After taking seventh in the mile at the indoor state championships, the senior turned in his best performance in the 800 at the District 1 Class 3A championships, where he ran a personal best 1:54.99 to take home fourth place. He also joined fellow All-Delcos Patrick Lawson and Quentin Ryan, along with Gabriel Zwilling, to earn a silver medal in the 4 x 800 in the PIAA Class 3A championships in a school-record 7:45.59. They had won gold in the event at the District 1 championships. Fingerhut will continue his career at the University of Pittsburgh.

Patrick Lawson, Haverford: Lawson clearly was the county’s top distance runner, finishing the season ranked No. 1 in Delco in the 1,600, mile and 3,200. The cross country All-Delco set personal bests in all three events plus the 800. Lawson took fourth at the PIAA Class 3A championships in the 1,600 in 4:11.73 after placing second in the event at districts. Lawson ran the anchor leg of the 4 x 800-meter relay that was the District 1 Class 3A champion, finished second at the state championships and fifth in the Championship of America at Penn Relays. He also set the school record while winning the 3,200 (9:15.66) at the Delco Championships.

Quentin Ryan, Haverford: The third member of Haverford’s highly successful 4 x 800-meter relay had an outstanding individual season, too. He ranked second in the county in both the 1,600 and 3,200 and third in the mile. Only Lawson and Episcopal Academy’s Michael Woolery had better times in those events. The junior, who earned All-Delco honors in cross country, placed fourth in the 1,600 at the District 1 Championships and 14th at states, running a personal-best 4:17.92. Ryan was the Central League champ in the 3,200 and second at Delcos, where he ran a PR of 9:15.71.

Bryce Cooper, Episcopal Academy: A standout in football as well as track, the senior helped lead the Churchmen to their first Inter-Ac League title in 43 years as well as their first PAISAA team title. The sprinter and hurdler earned All-Delco honors for the second year in a row. He was the Inter-Ac champion in the 400 and 300 hurdles, and he also posted the top time in the 300 hurdles in the preliminary round at the Delco Championships. Cooper won the 300 hurdles at the Upper Moreland Invitational and ran the anchor leg of the 4 x 400 that won the Inter-Ac title and finished third in the Philadelphia Area race at Penn Relays. He is headed to Williams College to play football. Joshua Allen, Haverford School: The premier high and triple jumper in the county, the senior ranked first in Delco in both events. Allen won the Inter-Ac and PAISAA titles in the high jump, clearing a season-best 6-6 at Inter-Acs. As a triple jumper, he was second at the Inter-Ac Championships (43-4) and then topped that mark by more than three feet (46-5) to take the PAISAA title and help the Fords to a third-place finish in the team competition. Allen, who earned honorable mention all-state honors from the Pennsylvania Track & Field Coaches Association, will attend Notre Dame.

Mekhi Rodgers, Episcopal Academy: Another multi-talented athlete who was key to EA’s team success, the senior ranked first in the county in the long jump (22-10), second in the 200 (22.18), third in the 100 (11.00) and fourth in the triple jump (43-6 ¼). He won the Inter-Ac title in the long jump and was second in the event at the PAISAA championships. He also won the triple jump at Inter-Acs and took second in the 200 at the PAISAA meet. Rodgers was also a member of EA’s 4 x 100 and 4 x 400 relays. He will attend Hobart College.

Michael Powel, Haverford: The shot put was the most competitive event in the county this season with five throwers topping the 50-foot mark. The senior Powel was the clear leader in that event. He won the Delco championship with a personal-best throw of 56-2, finished first at the Central League championships, second at the District 1 Class 3A championships and third at the PIAA championships. Powel topped 56 feet three times and also won the Central League crown in the discus with a personal-best heave of 136-11. He will play football and compete in track at Muhlenberg.

Kouassi Toukou, Delco Christian: Versatility was Toukou’s specialty, competing in all three throwing events for the Knights. The discus, though, was his best. He won the Bicentennial League, Delco and District 1 Class 2A championships in the discus. His best throw of 144-4 earned the junior a silver medal at the Twin Valley Invitational. He also took second in the District 1 Class 2A shot put and third in the event at the Bicentennial League meet. He saved his best throw in the javelin for last when he went 113-3 to take seventh at districts.

Patrick Donaher, Haverford School: A repeat All-Delco, Donaher followed up an outstanding indoor season where he had an overall best throw of 56-0 with an equally successful outdoor campaign that included four victories and an invitation to the Penn Relays. Over the last month of the season, the senior consistently threw 52 feet or better. He won the Inter-Ac and PAISAA championships, the last with a personal-best outdoor heave of 55-7. Donaher finished second at the Delco championships and also took first at the Upper Moreland Invitational. The Bucknell signee finished ninth at the Penn Relays (53- ¼).

Tyler Klambara, Springfield: A two-sport standout in football and track, the 6-4, 310-pound junior came into his own as one of the five throwers in Delaware County to top the 50-foot mark in the shot put. He took fourth at the District 1 Class 3A championships with a personal-best and school-record heave of 54-1 ½ to earn a trip to the PIAA championships, where he placed 10th. He won the shot put at the Great Valley Throwers and Springfield Invitationals, was second at the Central League championships and fourth at Delcos. He also competed in the discus, where he was third at Great Valley and fourth at the Upper Darby Throwers Invitational. Klambara is receiving Division I interest for football. Michael Woolery, Episcopal Academy: Already a two-time All-Delco as a sophomore, Woolery is one of the rising stars and one of the one of the most versatile runners in the county. His range stretched from the 400 to the 3,200. He ranked second in the county in the 800 and mile, and fourth in the 1,600. His best events, though, were the 800 and 1,600, where he was the Inter-Ac and PAISAA champion in both. He also won the PAISAA 1,600-meter title in a personal-best time of 4:22.16 and took the PAISAA title in the 800 in 1:57.97, his second-best time. Woolery was also a member of EA’s highly successful 4 x 400-meter relay team.

Eric Willis, Academy Park: Like Longo, Willis also is a multi-sport All-Delco. He earned first-team honors in football last fall, and this is his second All-Delco selection in track. His best event was the 100, where he broke 11 seconds three times this season and won the Delco title for the second straight year. He also won the 100 at the Father Judge Relays and the Pennsylvania Track Classic. Willis took fourth place at the District 1 Class 3A championships to earn a spot at states, where he finished 13th. Willis will play football at California University of Pennsylvania.