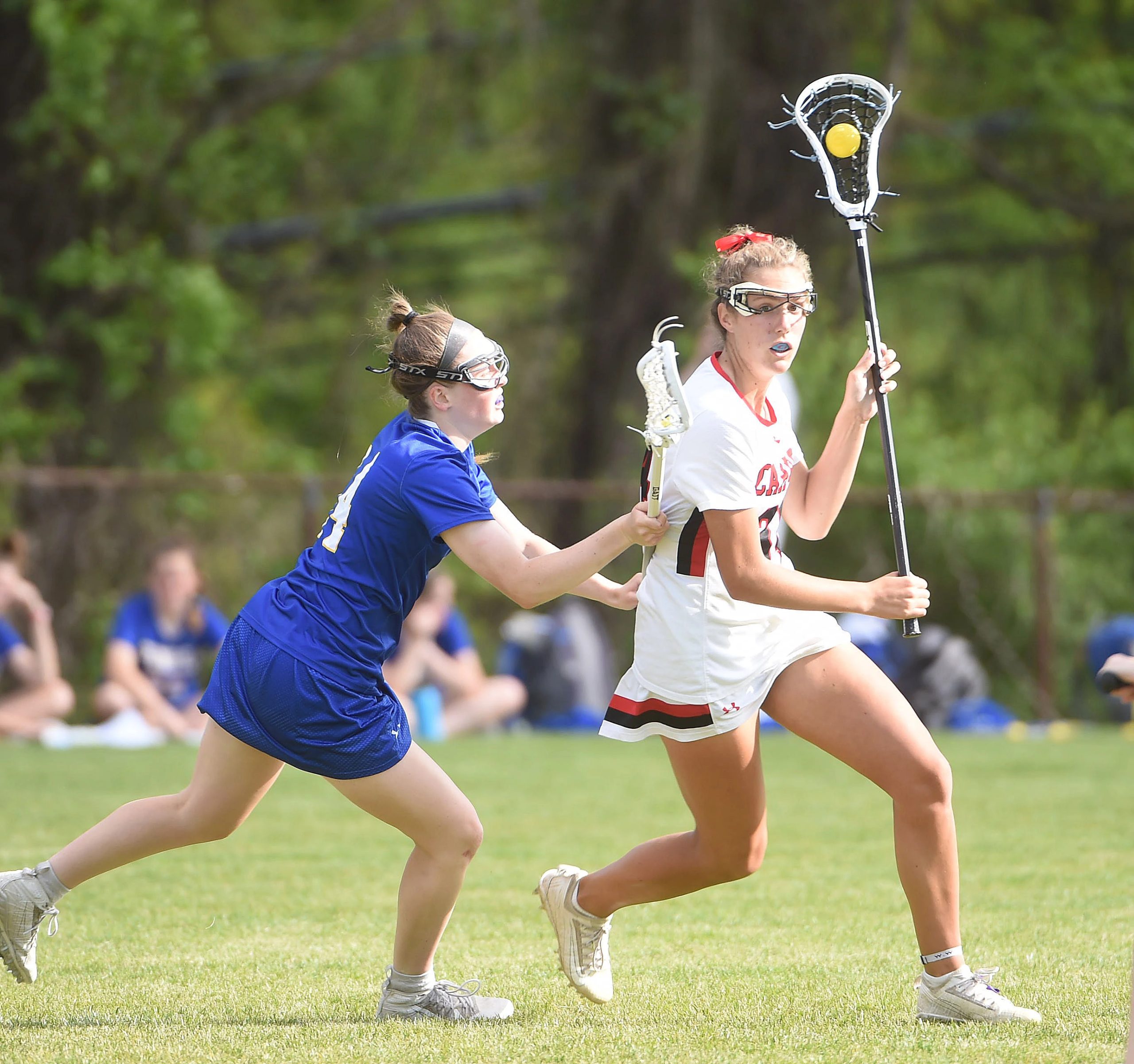 Archbishop Carroll's Kiley Mottice moves the ball in the first half of their game against Springfield-Delco. The Patriots went on to win 13-9 to undefeated in the regular season. (Pete Bannan/MediaNews Group)

Kiley Mottice’s dream as a freshman at Archbishop Carroll was to play soccer at the college level. Then came her first season with the Patriots girls lacrosse team and her path shifted.

“After that season I just realized how much more I loved lacrosse and enjoyed playing,” she said. “And just everything about Carroll and lacrosse kind of pushed me towards that instead of soccer.”

The change was a beneficial one for both Mottice and Carroll. The 2022 The Reporter/Times Herald/Montgomery Media Girls Lacrosse Athlete of the Year – who is heading to the University of North Carolina in the fall – paced the Patriots in both goals and assists as Carroll claimed its second straight PIAA-2A championship with a perfect 24-0 record.

“I think Carroll has always been an incredible, incredible place to be and play lacrosse,” Mottice said. “But I think I’m extremely proud of not only the players but just everything, to be able to finally have our names be ranked nationally and be in the mix of teams that are from Maryland and are just like powerhouses and to be able to have our name in that conversation.

“I think it’s just a sentiment to what [coach Lorraine] Beers has done in all that she has built at Carroll.”

Mottice led the Patriots’ attack with 63 goals – 58 during the run of play and five on eight-meter opportunities – while also dishing out 38 assists, averaging 2.6 goals and 1.6 assist per contest for a balanced Carroll offense that scored 16.5 goals a game. Mottice finished the season with a team-high 101 points.

“I’m definitely proud of that as well but I think I’m just grateful for my teammates and my coaches,” she said. “Because without them making those plays and pushing me in practice and just helping me be the best person and player I can be. I wouldn’t have been able to score or have assists or any of the points that I have.”

Mottice also had 29 draw controls, collected 13 ground balls and caused nine turnovers in a senior year where she felt her biggest improvement was developing confidence as a leader.

“I think just becoming more vocal on the field and not being afraid to help other girls,” Mottice said. “The underclassmen I feel like last year I was more timid to help them on the field or be like ‘Instead of doing this just take one more fake to make the shot or something.’

“So I think, this year I just became a lot more vocal and just like kind of what I was saying I was just trying to lift people up as best as I could and just make sure that our team was just celebrating each other constantly. And just I think trying to make sure everyone focused on the next play and didn’t worry about the past mistakes and stuff.”

Mottice earned her second straight Philadelphia Catholic League first team selection – her third in her career after being honorable mention as a freshman in 2019 – in helping the Patriots win their 21th consecutive PCL title.  In Carroll’s 17-7 win over Cardinal O’Hara in the league final, Mottice recorded her 150th career goal, finishing with five goals and two assists as the Patriots extended their PCL winning streak to 262 games.

“We spent more time this year focusing on the next play and celebrating all of our little success where last year I think we got down on ourselves about the mistakes we made,” Mottice said. “So I think that was probably the biggest thing this year was every time that we got a ground ball or a 50/50 we celebrated those things because that is what helped us win all of our games by those small plays.

“And so I think just being able to everyone on the field just was celebrating each other and I think that’s what helped us become where we were this year compared to last just by supporting each other no matter what and just celebrating the little things.”

Mottice also was named an USA Lacrosse All-American for the East Pennsylvania region and earned USA Lacrosse All-Academic honors in the region as the Patriots’ perfect run ended with the third PIAA title in program history and  Carroll ranked No. 7 in the USA Lacrosse National Girls’ Top 25 that came out June 14.

“We go into every season, every game just wanting to win every game, wanting to beat every opponent that we play,” Mottice said. “But I think especially since last year we lost a lot of our games, our big games by one or so, I think this year it was a bit of a surprise at times that we did pull it together and we did go undefeated. But at the same time with Coach Beers on the sideline and everyone, all the other girls on the field at the same time it’s not a surprise just because of who are team was.”

After rolling through the opening two rounds of the PIAA-2A tournament – topping Gwynedd Mercy 22-3 in the opener then Mount St. Joseph 19-8 in the quarterfinals – the Patriots’ run at a repeat was put to the test in their final two games.

In the semifinals, Carroll faced Bishop Shanahan for the second time in 2022. The Patriots topped the Eagles 11-8 in their regular-season matchup April 8 and with a spot in the title game on the line at Avon Grove Carroll jumped out to a 6-1 halftime lead and held on to secure an 8-4 victory.

“I feel like whenever we play Shanahan it’s definitely just a tight game,” Mottice said. “We know how strong of a team they are and so I think just being able to finish that game with more of a steady lead than in the beginning of the game that also just gave the confidence and strength that we needed to move onto the championship and win that game.”

In the PIAA final against District 3 champ Twin Valley – which the Patriots beat in last year’s state semifinals – Carroll found itself facing an early deficit, trailing 6-3 before a Mottice goal made it 6-4 at the break.

The Patriots battled back to grab a 7-6 lead before Twin Valley struck twice to go back ahead. But Carroll answered with the game’s last three goals for a 10-8 victory for back-to-back state gold and an unblemished 24-0 mark.

“I think it wasn’t too stressful,” Mottice said. “Just because not only last year in the state championship were we down at half and came back but there was multiple games this year where it was either within one or tied the entire game.

“And so I think because of the experience we had in the beginning of the year of being in those situations it allowed us to just have confidence in ourselves and be like ‘OK we don’t need to freak out here, just take a deep breath, we have time and we have been through this before.’ So I think that just the games in the beginning of the season that challenged us prepared us for that moment.”

Mottice, who is from Downingtown and played club at Phantastix Lacrosse, is eager for her next step in her career as she gets ready to head down to North Carolina to join a Tar Heel program that won its third NCAA championship last season with a 22-0 mark.

“It’s amazing, I can’t wait,” Mottice said. “I’m so excited just to be able to be a Tar Heel and just I’m excited for the next chapter.”