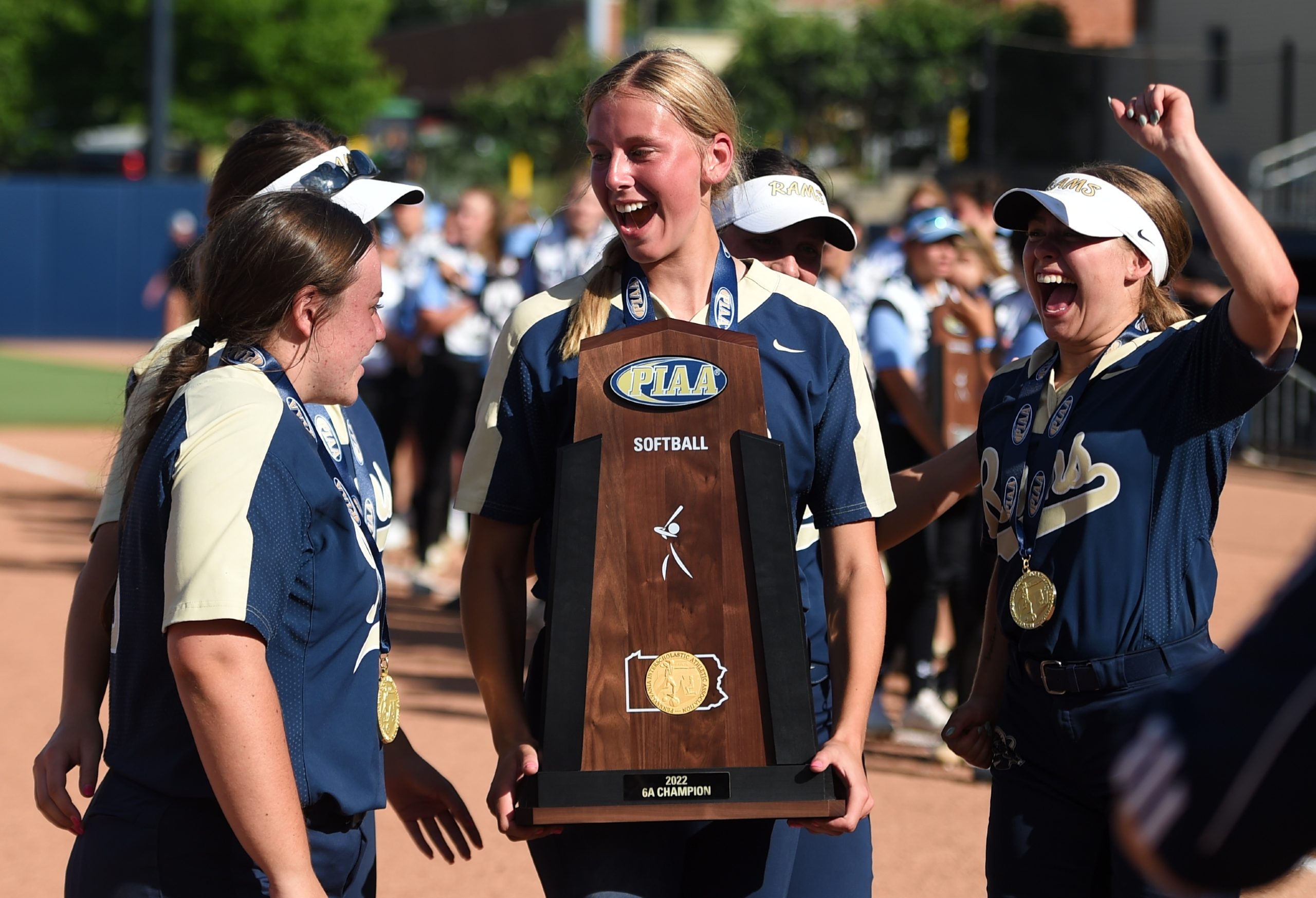 UNIVERSITY PARK >> There have been a multitude of talented teams and players to come through the Spring-Ford softball program.

The Rams couldn’t add to either of those first two lists earlier this postseason.

On Friday night, however, they put themselves in a company all their own and the difference for this group of girls was much more than their arms, bats and gloves.

A group that prides itself on its closeness and toughness defeated Seneca Valley 5-0 for the program’s first state championship.

“I think we’re just really close and we have that chemistry,” senior catcher Karissa Potteiger said. “And we don’t like to lose, so we fight and we scratch. I think that was the best thing about this group.”

From a pure talent standpoint, this Rams’ team probably wouldn’t rank at the top of the list of Spring-Ford’s last 25 softball teams — just look at last year’s state quarterfinalist lineup that was loaded with future Division I talent.

A senior core of Potteiger, pitcher Jules Scogna, first baseman Maddie Williams and outfielder Ali and Lexi Wescott were integral in making sure this group uniquely bonded and found a way to get the job done at the right time.

The Rams were truly more than the sum of their parts and finished the season with state gold because of that.

“This game was the perfect time for it,” Scogna said. “We finally all clicked together. It was so cool to be a part of and see everyone succeed. I’m really happy for everyone.”

Injuries throughout parts of the season made things tough for the Rams. Morgan Lester and Lexi Wescott both missed time, though Spring-Ford still managed to put together an undefeated regular season.

“A couple injuries, but that just made us grow closer I think because we had to fight through it,” Ali Wescott said.

The next hurdles to push through for the Rams came in the postseason.

After semifinal losses in the PAC and District 1 tournaments, state gold wasn’t on the radar.

There were lessons in those losses, however.

“We were really not expecting to go all the way after the outcomes in PAC and districts,” Potteiger said. “I think it just really shows what we can do and the fact that we do come back and we will bounce back. Obviously, it’s the end of the season but we could have gone much further if we wanted to I think.”

“We battled, even after our PAC and district losses,” Lexi Wescott said. “I think it pushed us.”

The Rams’ resilience was on display throughout Friday’s championship win over Seneca Valley.

Ali Wescott finished the two-out scoring in the top of the fifth, coming up with a clutch two-out single to pick up her teammates and score Carlin, who led off the inning with a double.

“It’s crazy, we did so well,” Ali Wescott said. “We pushed through a lot.”

There were tough plays made all over the field — particularly at the middle infield spot by second baseman Lester and shortstop Riley Gancasz.
Then there was quite possibly the grittiest performance of them all by Scogna.

After battling through a nagging injury throughout the state postseason run, Scogna tossed a two-hit complete-game shutout to finish off her Rams’ career before heading to Boston University.

“Obviously this being my last high school game, I wanted to keep playing through, but I wanted to do this for my team more than anything,” Scogna said. “I wanted to tough it out and get the win for them.”

This Spring-Ford group will go down as a special bunch.

Their experiences helped push them to the program’s first state title and create a bond that won’t soon be forgotten.

“We really feel like we can overcome anything as a group and I think us persevering together has made us super close with each other,” Scogna said. “We’ve all been there for each other.”

“It’s crazy,” Williams said. “We pushed through a lot, injuries and all we were able to come through with our state championship.”