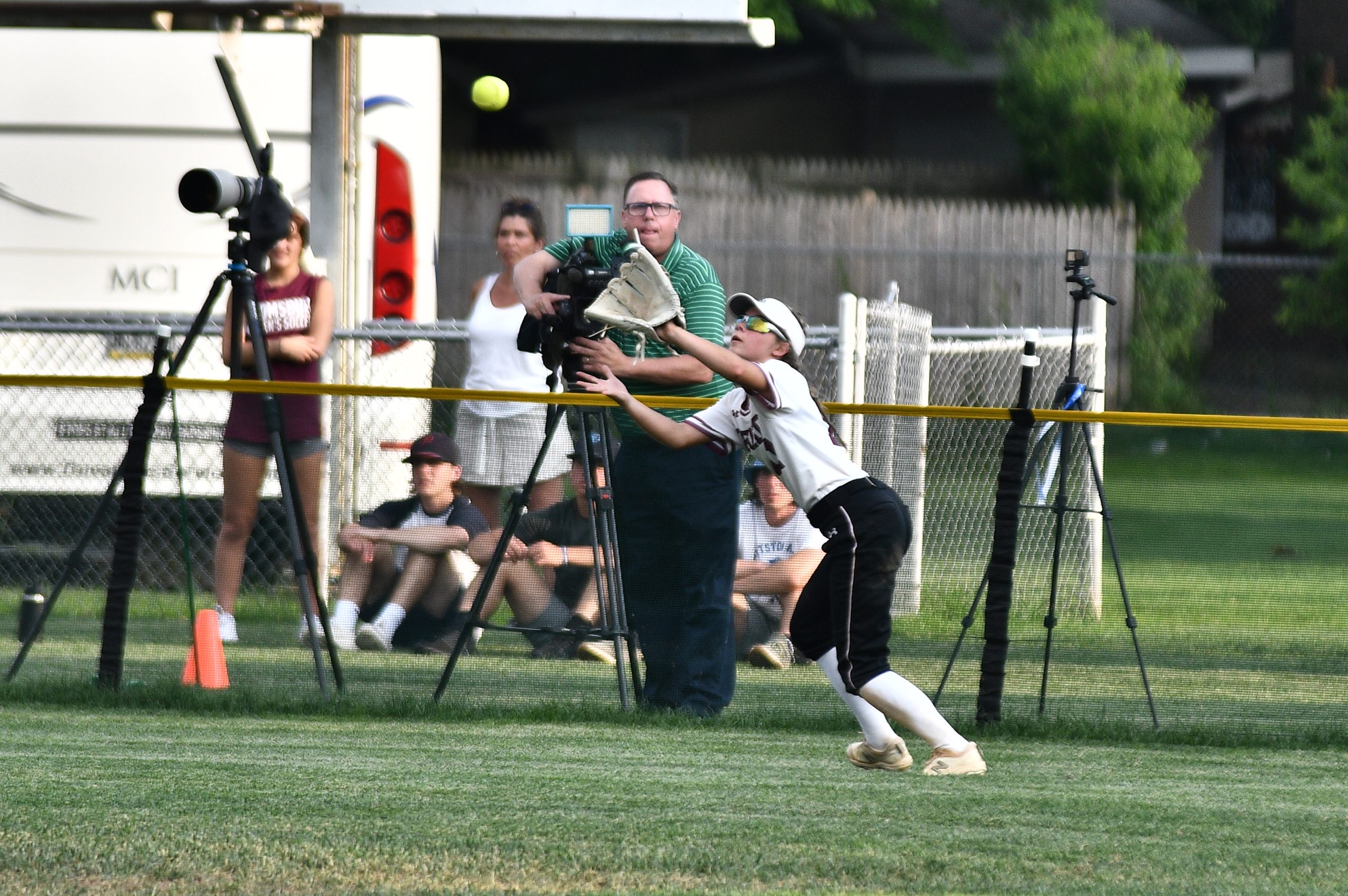 ALLENTOWN >> Throughout the postseason, Oxford developed a reputation as comeback kids.

Game after game, the Hornets found themselves trailing, only to bounce back with late inning rallies. But Monday night at Patriots Park in Allentown, in the PIAA Class 5A Softball Semifinals, the comeback bid fell just short, and Pittston Area topped the Hornets by a score of 8-4 to advance to Thursday’s state championship game.

Emily Basilio is out at second (BILL RUDICK for MediaNews Group)

“These kids are never going to give up,” said Oxford coach Josh Socash. “Even down 6-0, these kids were confident they could come back. We were just a couple of base hits short.”

Pittston flashed its power early on, plating a pair of runs in each of the first two innings. In the top half of the first, Sage Weidlich got things going with a two out single, then Tori Para launched the first of a pair of home runs in the game.

The second inning was much the same, with Kellie Booth getting on in front of Weidlich, who took one deep to center field for a two-run home run, and a 4-0 Patriots’ lead after two innings of play.

By games end, the Patriots had blasted four home runs, leading to six of their eight runs.

“I was really impressed with the way they squared on some balls and drove them,” said Socash. “I think they might have had eight home runs on a 200-foot fence.”

After the Patriots bumped the lead to 6-0 in the sixth, Oxford battled right back in it.

Maddie Frank (2-4, 2B, R) led off, and beat out an infield single. Molly Friel followed and reached on an error to make it first and second. CeCe Figueroa worked a one out walk to load the bases, and Angela Beadle brought two in with a base hit to short center.

When Hannah Aker reached on an error, another two runs came in, and all of a sudden it was a 6-4 game. Though Pittston escaped with no further damage, the energy on the Oxford bench was through the roof.

“I just wanted to get on base any way I could,” said Frank. “It wasn’t the greatest hit, but it put me on base. We’ve been pretty good with coming up with runs when we need them, so I thought we’d be able to get back in it. We just came up a little short today.”

The Hornets did a pretty nice job getting the bat on the ball and putting it in play. The Pittston starter Gianna Adams, though only a sophomore, registered he 300th career strikeout in the game, including over 200 this year, and had tossed two no-hitters this postseason. But Oxford hitters managed seven hits, and its four runs scored was the most allowed by Adams all year.

“McKenna is the person you want up in crucial situations,” said Socash. “She batted leadoff early on, but moved to third so she could get more opportunities to knock in runs. She’s great defensively and a great all-around player and person. I’m really glad we get her back next year.”

Pittston answered right back though, tacking on a pair of insurance runs with their fourth homer of the day to make it 8-4.

Oxford graduates just one senior, left-fielder Hannah Aker. Next season, the Hornets will likely come back feeling hungry and confident.

“Just this experience is going to mean a lot to us next year,” said Frank, who will be a senior next year. “We now know we can compete at this level, and we will play with so much confidence.”

As it is, this Hornets team has gone well beyond what any other Oxford softball team has done, and gone further than all but two teams in any sport at the school. Both the 2005 boys’ basketball team and 2006 girls’ basketball teams also reached the state semifinals.

“This was my last hurrah,” said Aker. “And it has been an amazing way to wrap up my time at Oxford. This has been such a great season, and it has been so much fun doing the things we’ve done with this team. It’s a nice feeling to know we brought this program to new heights.”