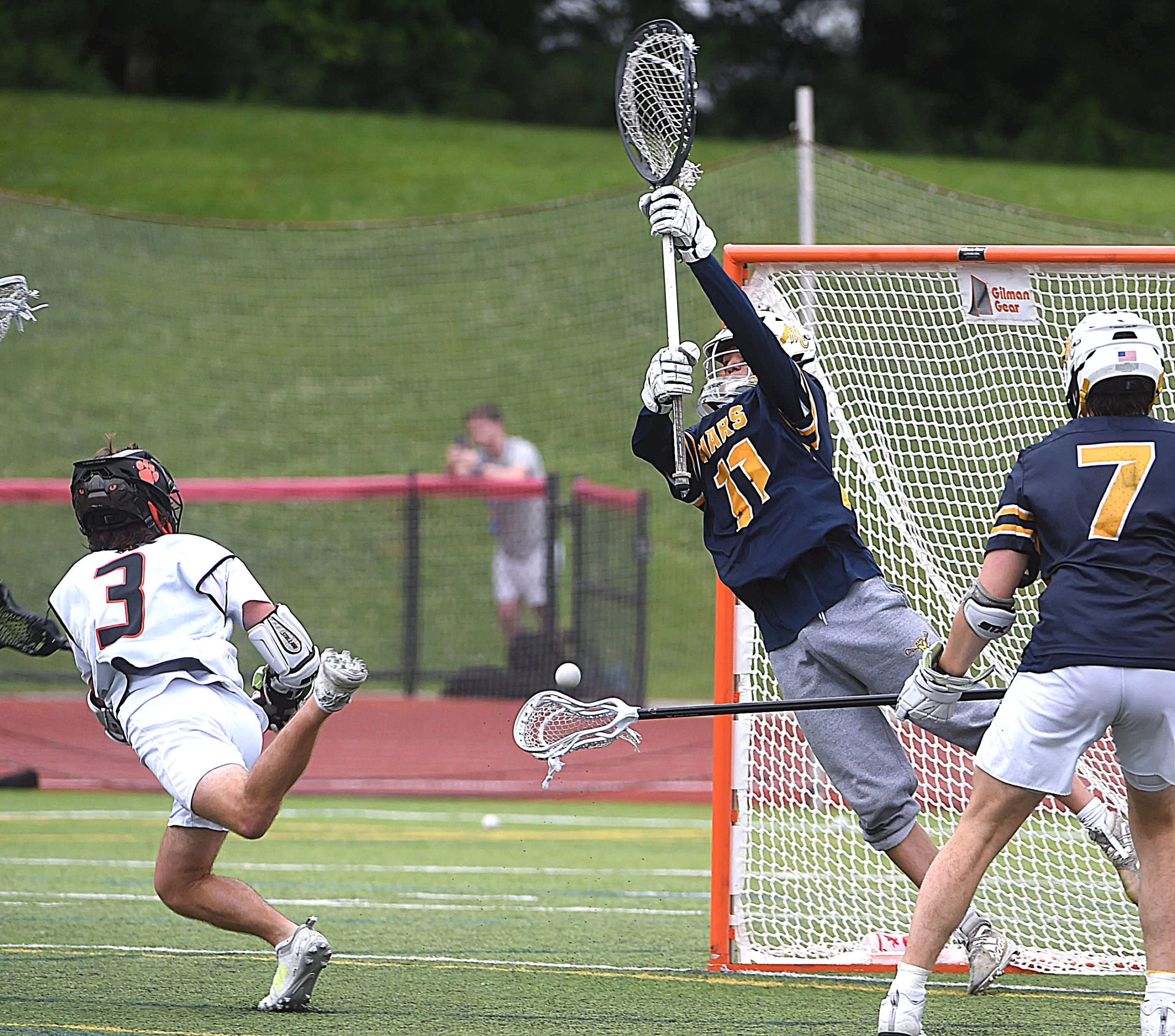 Mars, its opponent in the PIAA Class 2A championship game, came into the final with one of the most potent offenses in the state. Overall, the Fightin’ Planet was averaging 18.1 goals per game, 19.3 in the postseason, had eight games with 20 or more goals and had been held to single digits just once. That had come in their only loss, a five-goal setback to perennial Ohio power Upper Arlington, which recently won the Division 1 state title in the Buckeye State for the 17th time.

If the Tigers were going to win their first PIAA crown and keep the WPIAL winless in the final they had to shut down or at least slow that high-powered attack.

Marple Newtown was up to the task in three of the four quarters at West Chester East’s Zimmerman Stadium. It was that one quarter, specifically the second period, that kept the Tigers from enjoying a championship celebration.

Mars scored four times in that fateful second quarter to open up a four-goal advantage at halftime, and then turned to its defense to withstand a furious comeback bid by the Tigers in the second half to become the first WPIAL team to win a state title with a 9-6 triumph.

“It’s tough to come back when you’re down like that,” Marple Newtown senior Charlie Box said. “I’m proud of our team for the resilience we showed. We kept battling throughout the game. We never gave up.”

It was the first time this season that Mars (23-1) won a game in which it scored in single digits, so give credit to its defense, which stymied the Tigers (20-5) much of the afternoon and goalie Jonathan Grieco, who came up with 11 huge saves.

“We knew we had to slow down the game,” said sophomore Cole Yoshioka, one of the key members of that defensive unit. “We knew that if we could hold it down on our end the offense would be able to take care of it on their end.”

The Fightin’ Planet did just that, especially in the second quarter.

Austin Cote, who is headed to Loyola, scored the second of his three goals 43 seconds into the period to break a 2-2 deadlock. Midfielder Kyle McEwen tallied a little over four minutes later to make it 4-2. Vincenzo Grieco found the back of the net for his second goal 22 seconds later and Jack Dunham extended the lead to 6-2 with the first of his two goals with 5.4 seconds left in the period.

While the offense heated up, the defense locked down. Mars held the Tigers to just two shots in the period and just one of those was on goal, which Jonathan Grieco handled. Much of that focus was on Charlie Box and his younger brother, Brian.

“We put a lot of attention on them,” senior defender Quinn Fuller said. “Clearly their team ran through those two and they’re great players. We knew our matchups. We knew what we had to do with the Box brothers, contain them, and play our game as a defense.”

Charlie had two goals and one assist and Brian added an assist but there was a Mars defender everywhere they went.

“We’ve always been a team that just kept our heads down and worked hard,” Charlie Box said. “I couldn’t ask for anything more. It’s a special group. We all knew when we were down at halftime that we were going to keep fighting and see what happens.”

The Tigers did not go quietly. Marple Newtown twice cut the deficit to two goals, once in the third quarter and then again in the fourth. Freshman Ryan Keating tallied two of his three goals in the period, the second off an assist from Brian Box, and Charlie Box tallied his second goal with 5.6 seconds left to get the Tigers within 7-5 heading into the fourth quarter.

“I was just playing for my teammates,” Keating said. “This was the last game for the seniors and I just didn’t want to let them down.”

But every time it appeared the momentum was shifting Marple Newtown’s way, Mars came up with a play to make sure that didn’t happen.

Jonathan Grieco made a big save on a shot by Charlie Box two minutes into the fourth quarter. A little over three minutes later Dunham converted a pass from Fuller to extend the lead to 8-5.

Goalie Grieco came up big again when he stopped a shot by Brian Box to keep the margin at three goals. Keating came through again with his third goal with 2:39 to play in the game to get the Tigers within 8-6, but Wesley Scurci tallied with 29.3 seconds left to ice it for Mars men.

“The second quarter got us today,” Marple Newtown coach Kevin Merchant said. “The kids battled, though. They battled for four quarters. I think they set a bar for Marple Newtown lacrosse in the future. I’m proud of our guys.”