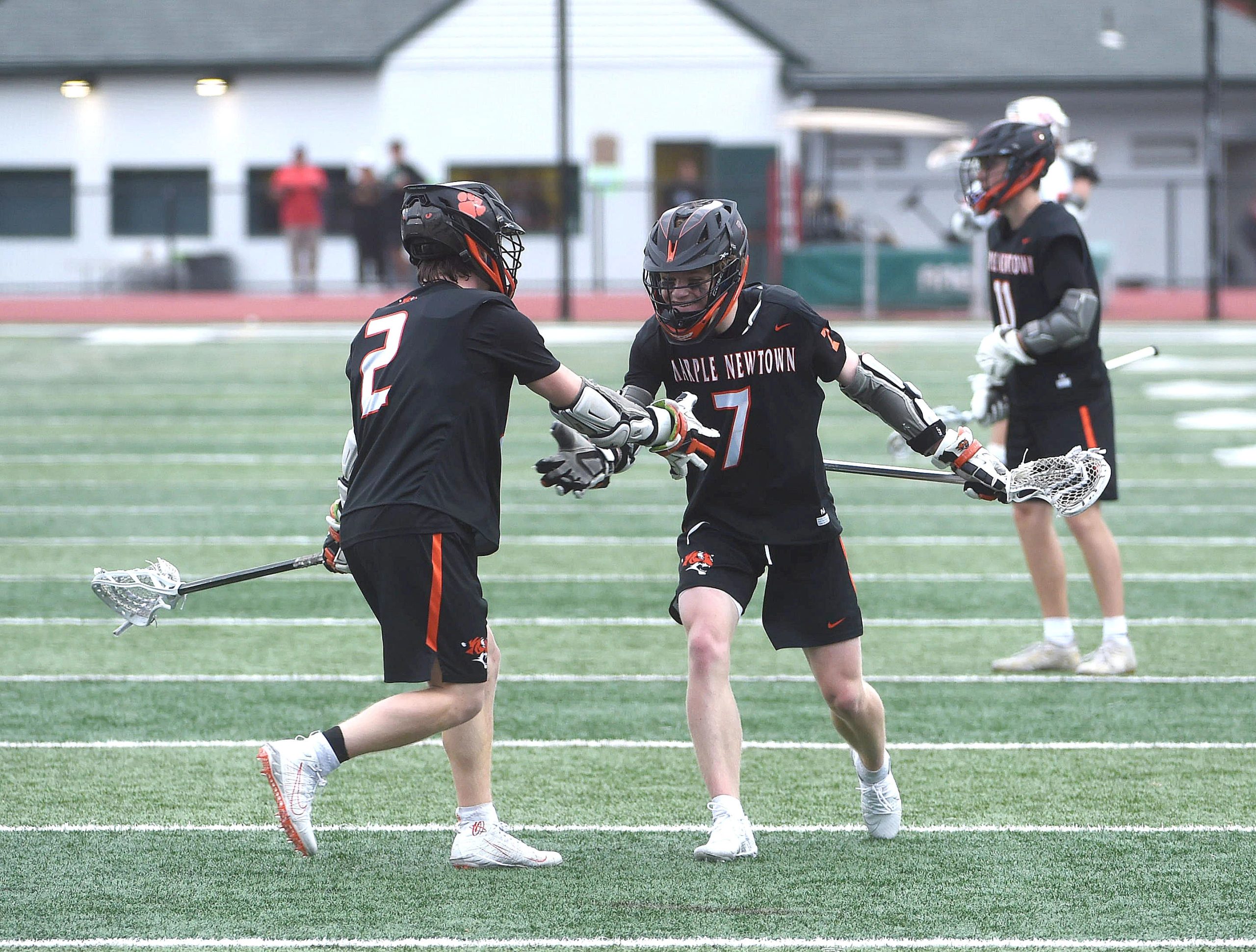 EXETER TWP. — Kevin Merchant saw it early in Brian Box, the work ethic, the shooting accuracy, the confidence to play his best lacrosse at the most important times.

Charlie Box saw it even earlier.

“His whole life,” said Box, the Marple Newtown senior. “He always had a stick in his hand. I always knew he’d be great.”

That will be another big stage for the younger Box. Merchant, the Tigers’ coach, knows his rookie is ready for the moment.

“As far as the setting, as far as the stage,” Merchant said, “the lights are never too bright for Brian Box.”

That was evident early, as Box needed 8:03 to stake the Tigers to a 1-0 lead with an unassisted goal, then made it 2-0 on a feed from Cooper Conroy with 2:59 left in the first quarter played in a heavy rain. When Charlie Box and Joey Yukenavitch added first-period scores, the tone was set.

“The guys did really well in the first half,” Merchant said. “I am extremely proud of them and very happy. They have been great all year around. And they just continue to work and get better.”

That has been particularly true of Brian Box, who, by Tuesday, bordered on unstoppable.

“He’s one of the best players in the country, I really believe that,” said Charlie Box. “I knew he was going to be great, but I didn’t know he’d be this great. He has been incredible.”

Yukenavitch scored the second of his three goals at the top of the second quarter before the Pioneers (16-3) grew comfortable. Stewart McClain scored the first of his four goals to narrow the difference to 5-1, but again the Tigers responded, scoring four times in the final 6:46 of the half for a 9-1 cushion. That run included Brian Box’s third goal.

“It was a big game and I felt really good walking down to the field,” Box said. “I felt great. And I love the rain. I have been working hard for this. And hard work pays off. But I didn’t expect anything like this.”

“We’ve been playing in the back yard our whole lives,” Brian said. “We were always playing when we were younger. So the connection has always been there.”

Though Lampeter-Strasburg continued to stir in the third, scoring three of the first five goals, the Tigers benefited from the steady goalkeeping or Jack Welsh, who would make 10 saves. When Ryan Keating and Alex Chambers scored early in the fourth, the Tigers were all but on their way to the state championship game. A couple of late McClain goals would not dull their enthusiasm.

The only disappointment, if there were any at all: The Tigers would not have another chance to take on Penncrest, which they defeated in the District 1 final and have enjoyed a spirited rivalry. The Lions fell earlier Tuesday to Mars.

“Yeah, that would have been pretty cool, another Central League matchup,” Charlie Box said. “But we know what we have to do. We just have to go out and be us. We have to play our game. We know Mars is well coached and has good players and will come in ready to go. But if we play our game, we should win. We just have to be us.”

The Box-to-Box connection will help.

“I know how good Brian is,” Charlie said. “Wherever he goes, he takes his stick, even if it is walking the dog. He is always throwing the ball around. This is the year we have been waiting for. Ever since he said he was coming to Marple, I knew he could be this good. And it has been great to play with him.”