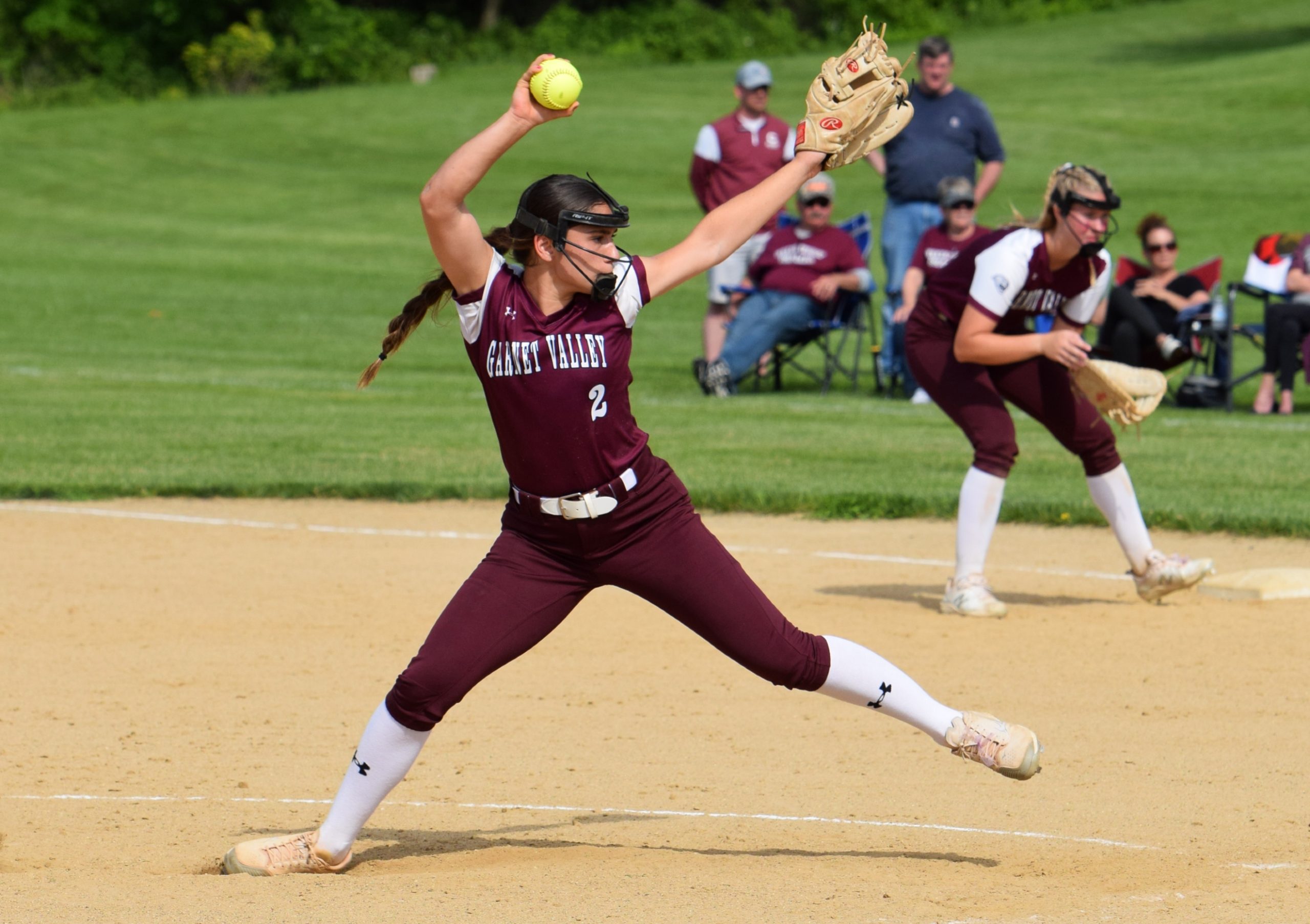 LANCASTER — Garnet Valley’s season ended abruptly in shoofly pie country Monday with a 9-0 loss to District 3 champion Penn Manor in the first round of the PIAA Class 6A playoffs.

The Jaguars (19-5) kept within two runs entering the fifth inning of the blustery, dusty contest that left everyone sneezing. But they managed only a couple of offensive highlights against winning pitcher Julie Bowmaster and closer Emily Riggs, and that made a big difference.

Offensive highlight No. 1 was Anna Sidlowski reaching third base in the fourth inning after a bunt single. The other was Ragan Bliss slamming a leadoff double in the sixth inning. Both were stranded, Riggs stepping in after the double to strike out all six batters she faced.

Sidlowski’s season ended in the dugout with an icebag on her left knee, the strikeout artist exiting in favor of Kelly Cornog after being unable to get an out in the sixth inning.

The Comets take on Spring-Ford in the quarterfinals. The Rams blanked St. Hubert, 11-0.

If Tuesday was any indication, it’s going to be tough to defeat the Comets (25-2), who pitch and play defense with the best of teams. In the fifth inning, right fielder Kaitlyn Ream made a running shoestring catch of a drive by Madde Mendoza and doubled up Elisabeth O’Connor on first.

“Their pitchers were both amazing and their fielding definitely was great,” Sidlowski said of the Comets. “They’re a great team. They were aggressive. I think it just comes down to nerves sometimes.”

The Jaguars committed two errors, including a throwing mistake in the first inning that allowed one run to score. Faster than you could say whoopie pie, Sidlowski’s wild pitch in that inning gave the Comets a 2-0 lead.

Sidlowski found a rhythm and actually had a no-hitter going into the fifth inning, but the Jaguars didn’t give her any runs to work with. They managed just three hits on the day and had a runner picked off first.

“We just came up short,” Jaguars coach Bryan Garrett said. “But we came up short against a very good team. You’ve got to give them credit. They did a great job. It came down to execution and getting big hits in different spots early in the game and they took advantage of it. We had a couple runners left on that could have turned the game.”

The Comets touched Sidlowski for two runs in the fifth inning and chased her with four in the sixth inning. Only Cornog prevented the game from ending on the 10-run mercy rule.

“I knew we were going to be in for a decent game,” Comets coach Dave Stokes said. “With all respect to District 1 teams, they’re big schools, they play competitive games all the time, they typically have decent, strong pitching and that was my main concern here. I thought we were probably going to see one of the better pitchers we’ve seen all year. But hey, we overcame. And that’s what we’ve been doing all season.”

Spring-Ford will have its work cut out in the quarterfinals. The one-two pitching punch of Penn Manor has proven brutal to teams that feel they’re just about ready to wear out Bowmaster. Paterson throws pure heat.

“This game kind of advanced the way it has all year for us,” Stokes said. “If Julie can get through the lineup twice, and we bring the other kid in, they’re two completely different styles. Julie is more of a drop-ball pitcher, Paterson a curve, slurve-ball pitcher. Julie, I can’t say enough about what she did. I don’t think I necessarily had to take her out of that point in the game but that’s just what we’ve decided to do this year.”

For the Jaguars, there’s always next year as Sidlowski and Cornog are back in the pitching circle.

“I think we went into the season very underestimated,” Sidlowski said. “I think we definitely all worked together really hard. A lot of people stepped up and got things done and gained confidence in themselves which is really important for next year.”

Sidlowski and the Jaguars will keep an eye on the quarterfinals. They’re well acquainted with the top teams in District 1, including Pennsbury, which rolled to a 10-2 victory over Manheim Township in the opening round.

Asked if Penn Manor was a state title team, Sidlowski took her time before responding, “I think that I think they have a shot, yes.”