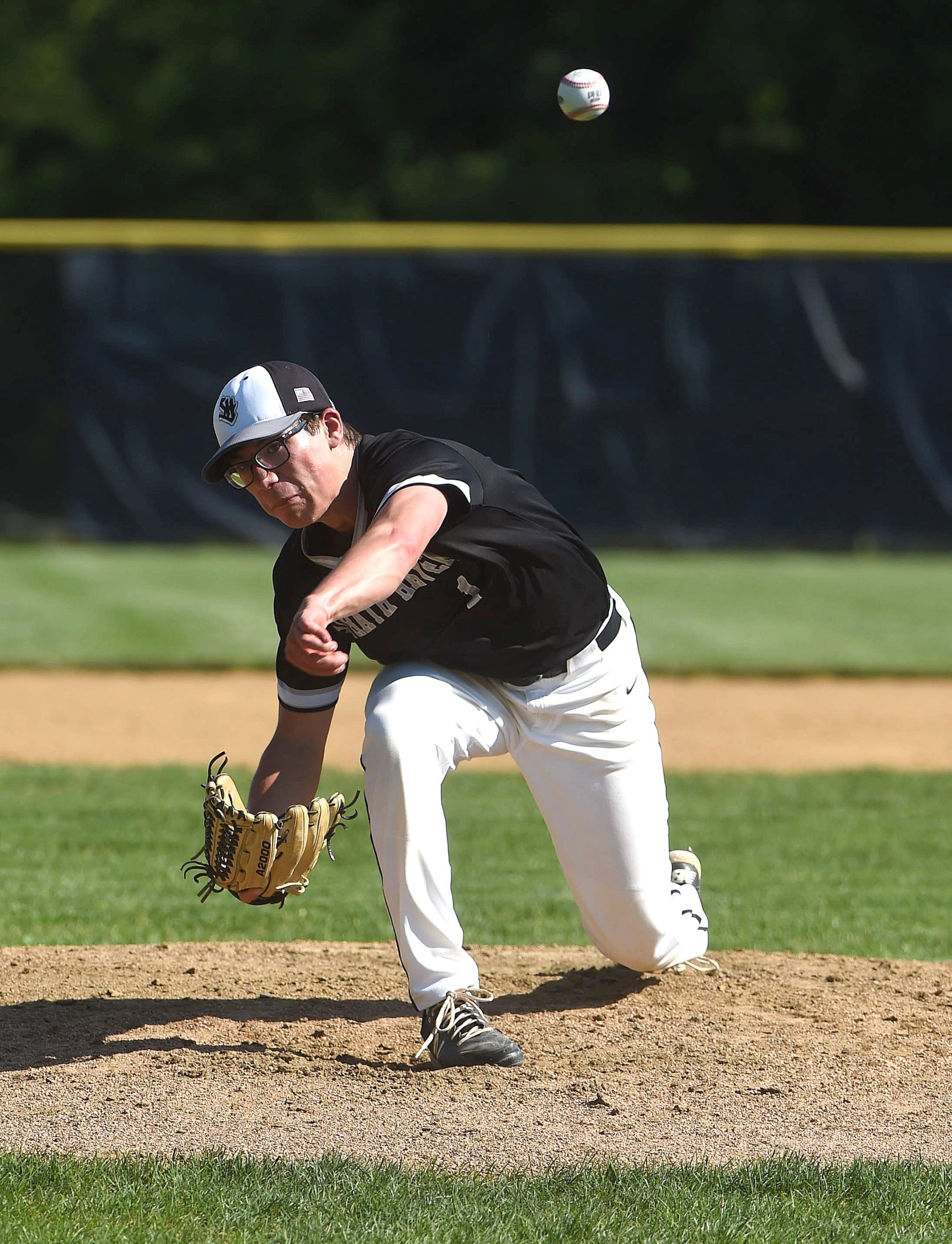 Strath Haven's Alex Pak delivers a pitch in the District 1 Class 5A championship game last week. Pak was solid on the hill and drove in three runs, but it wasn't enough as the Panthers dropped a 5-4 decision to Archbishop Wood in the opening round of the PIAA Class 5A baseball tournament on Monday. (Pete Bannan/MediaNews Group).

SPRINGFIELD TWP. — There will be a brief break, a football training camp, the usual tests facing a decorated Central League quarterback and another winter of successful wrestling before Sam Milligan has the next chance prove what he had come to believe this spring.

Strath Haven, the all-around athlete is convinced, is perfectly positioned for 2023 baseball success.

“We’re returning our catcher, first baseman, second baseman, third baseman,” Milligan was saying, before taking a breath, “our centerfielder and our right fielder. We are going to have another good team next year.”

The Panthers weren’t bad this season before being eliminated Monday from the PIAA Class 5A tournament in a 5-4 loss to Archbishop Wood at neutral site LaSalle High. They overcame the loss of 13 seniors from the 2021 District 1 championship team and played into the 2022 District 1 final without injured ace pitcher Mike Valente, who broke his right wrist. They had an early 2-0 lead Monday and loaded the bases in a two-run seventh, but were subdued by the 19-4 Vikings, who will meet Manheim Central, a 9-8 winner over Marple Newtown, in the quarterfinals on Thursday.

“I think this game was like every one this entire season,” said Milligan, who earned first-team All-Delco honors in wrestling and second team in football after being a second-team All-Delco in baseball last season. “No one expected us to do very much. But our team fought to the end in every single game. Having one senior starting at the end of the season, being able to make it to the district championship game and have a state playoff game is pretty incredible. I don’t think anybody really thought we had that in us. So I am really proud of everybody on our team.”

The Panthers enjoyed solid starting pitching from left-hander Alex Pak, but were unable to take advantage of some early opportunities against Wood starter Michael Trommer. Despite collecting three hits in each of the first two innings, the Panthers would generate just the two-run lead. Milligan, who had three hits, led the game off with a single and scored on Pak’s double to right. In the second, Milligan delivered Matt DeFalco with a sharp single to center.

“We missed some opportunities to jump up four-nothing,” Milligan said. “We knew coming into the game that if we were going to jump on them, that would be our best chance of winning. We got two runs on them early, but I think we could have had three or four.”

From there, Trommer began to dominate, striking out five in succession in the second and third and nine in his six innings of work. The Vikings forged a 2-2 tie on a two-run Richie Bonino single in the fourth and took a 4-2 lead in the fifth when Patrick McKinney walked, Trommer poked a single and Aiden Myers clubbed a two-run double.

“There were five or six curve balls that I was fighting off,” said Myers, who has committed to playing shortstop for the Naval Academy. “So I was just trying to stay on the fastball and I was able to hit it.

“That was a good team we played. We knew it would be a good test. But this whole season, we have been fighting. The games have been close. So We knew that in a game like this, we could come out on top.”

Strath Haven would complicate that when freshman Luke D’Ancona led off the seventh with one of his three hits, Zane Malarkey walked and Milligan survived on an infield single. That set Pak up for a two-run, one-out double, but Wood reliever Connor Woodson worked his way out of the trouble to send the Panthers into the offseason.

“We were district champions last year and went back to the district final this year with a lot of young kids,” said Strath Haven coach Brian Fili. “We have seven starters back next year, and they got a taste of it. They have a lot to look forward to. We just have to get over that hump now and get to the next level.”