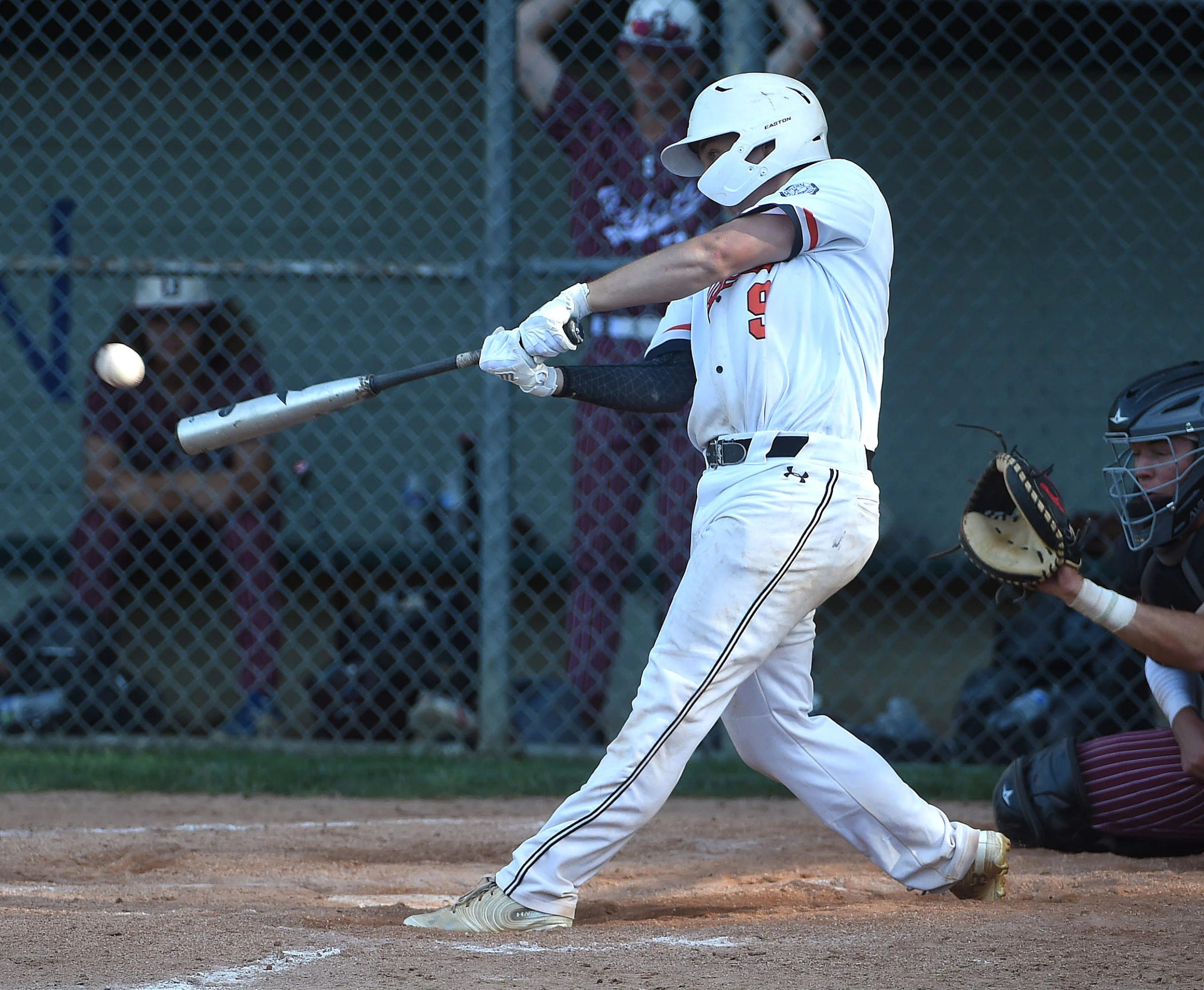 Marple Newtown's, Dom Carafa, in action against Oxford in the District 1 playoffs, stroked a three-run homer in a heart-breaking 9-8 loss to Manheim Central Monday in the opening round of the PIAA Class 5A baseball tournament Monday. (Pete Bannan/MediaNews Group).

MANHEIM — It’s hard to imagine a worse way to lose a baseball game.

Marple Newtown was two outs away from clinching a PIAA Class 5A tournament first-round win over District 3 champion Manheim Central. Alas, a routine grounder to shortstop off the bat of Dylan Yoder took a wicked hop and the ball shot over the head of Justin Brennan and into shallow center, allowing the tying and winning runs to score in the bottom of the seventh inning.

And so that’s how Marple Newtown, the third-place team out of District 1, had its season come to an end. The improbable happened.

Marple third baseman Dom Carafa, whose three-run homer in the fifth inning gave his team a one-run lead, had a good view of the final play. Brennan was set up perfectly to turn what would have been – should’ve been – a game-ending, 6-3 double play.

“This year we practiced on a pretty bad field to begin with, so we know terrible hops,” Carafa said. “They happen, you know? There’s no way to react to them and it’s just a bad situation.”

Dillon Can entered in relief of Brennan with nobody out in the seventh inning. Colin Thompson greeted Can with an RBI single to trim Marple’s lead to 8-7. Can battled back to get a strikeout of Cayde Connelly, but he drilled Andrew Harrison with a pitch to load the bases. Yoder and strange ball physics did the rest.

“I don’t know what’s out there, a sprinkler head or whatever,” coach Rick Zimmerman said. “It’s a crappy way to end a game. I’m looking at the runner, and he’s three steps out of the box. (Brennan) is getting ready to field the ball, he’ll just take it himself, it’s as simple as that. …

“I’ll lose any other way. If a kid gets a clean base hit or hits a home run, fine, I’ll lose any way. But to lose like that is beyond frustrating.”

Marple produced five straight hits and plated two runs in the top of the seventh to take an 8-6 lead. With the bases loaded sophomore left fielder Bennett Cox delivered an RBI knock, a liner over the head of the third baseman, to put the Tigers up 7-6. Sophomore right fielder Lucien Burger followed with a seeing-eye single in the hole between second and first base to make it 8-6.

“Those kids stepped up all year,” Zimmerman said of Cox and Burger. “It’s the reason why they’re up here playing varsity baseball.”

After Burger’s hit the Tigers still had the bags juiced with nobody out. One of the team’s bugaboos in 2022 was its lack of situational hitting. In this case the inability to add insurance runs came back to haunt the Tigers.

The Tigers grounded into a pair of fielder’s choices and Barons reliever Connor Rohrer struck out Brennan to retire the side.

“In the district game (semifinal) against Upper Dublin, it was the same scenario. It’s been our nemesis all year,” Zimmerman said. “We get the bases loaded and we can’t drive a baseball. We have some young guys in the lineup, and some guys that’s hit some slumps. But I’m not as a coach going to pull a guy because he’s been slumping a little bit. All these guys had great years. We hit .375 as a team for most of the year and that’s pretty good in high school ball.”

In the third inning, the Tigers pulled even at 3-3. Owen Mathes ripped an RBI double and Jason Bennett came through with a two-run single. Shaky defense in the bottom of the frame allowed Manheim Central to grab a 5-3 lead.

Carafa’s jack in the sixth traveled more than 330 feet over the fence in left-center to give the Tigers a 6-5 lead. The Barons knotted the score in the fifth on an RBI single by Connly.

Manheim Central scored three unearned runs in the second to take an early 3-0 advantage off Marple starter Jimmy Wigo, who struck out five in 2.1 innings of work. Mathes came on in relief and also struggled with his command. Brennan stemmed the tide with a solid 2.1 innings before running out of gas in the seventh. With the game tied in the sixth, and two runners on base, Brennan fanned Harrison and Yoder to escape the jam.

The Tigers qualified for the state tournament for a sixth year in a row, second under Zimmerman’s watch. But a bad bounce likely prevented Marple from moving on to the second round Thursday. It’s a loss that will linger for a long time.