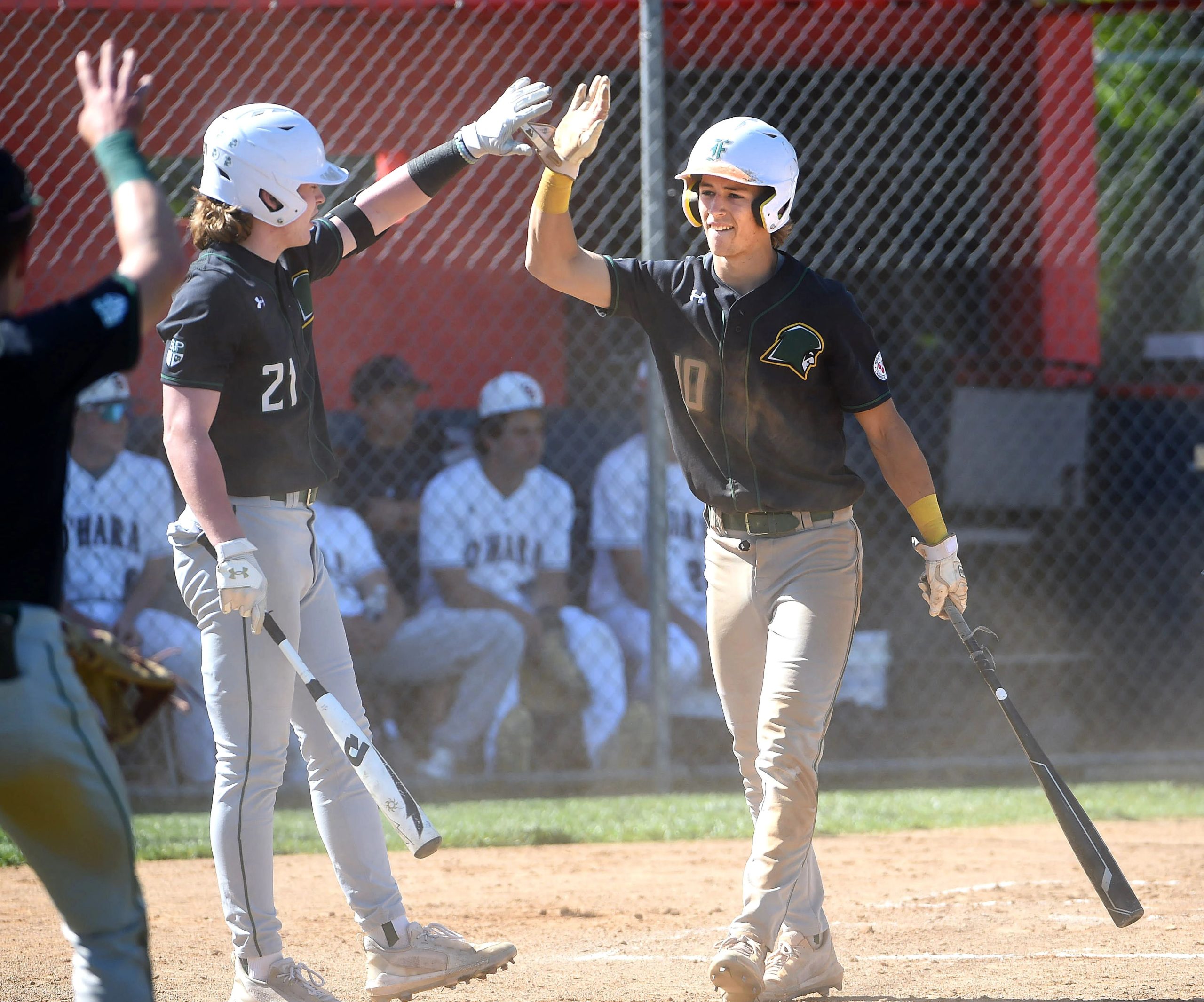 Joey DeMucci, right, getting a high five from Austin Cannon against Cardinal O'Hara earlier this season. Cannon drove in two runs and DeMucci one as the Friars topped Fleetwood, 8-1, in the opening round of the PIAA Class 4A playoffs Monday. (Pete Bannan/MediaNews Group).

PHILADELPHIA — If you’re an opposing pitcher, any let-up against the Bonner-Prendergast batting order comes at a substantial risk.

From one through nine, there are no soft spots in the Friars’ lineup, a clear reason for their one-loss record and shiny new Catholic League championship plaque. Monday, in embarking on phase two of their season goals, that order pummeled Fleetwood into submission.

The Friars rapped out 13 hits, in control from start to finish in an 8-1 win at Abraham Lincoln High School in the first round of the PIAA Class 4A tournament.

The win sends Bonner-Prendie into Thursday’s quarterfinals against District 4 champ Montoursville, a 5-2 winner District 2 titlist Wyoming Area. The site and time of that game has not been determined.

For the District 12 champions, sharing the batting wealth has been a cornerstone all season.

“It is pretty fun,” said Irv Fisher, the eight-hole hitter. “You don’t have to worry or have that much pressure on yourself. You have one of the best hitters in the country (Kevin McGonigle) coming up behind you in the two-hole and then Jaxon (Kehoe) leading off. If you get on base, 99 percent of the time, it feels like a guaranteed run scored. It’s more, we just have to worry about getting on base and not trying to do too much. It takes a lot of stress off the shoulders, having a team like that and such a stacked order from the top.”

Fisher got things started with a two-run single in the second inning. He scored again in the fifth after reaching on an error. Eight spots in the Bonner order produced hits, and it could’ve been much more lopsided a score if not for Fleetwood pitchers stranding 12 base-runners, including nine in scoring position.

Fleetwood (10-14), the third seed from District 3, was overmatched from the start, as the records hint. Starter Adam Knoll, a crafty senior lefty, battled, keeping Bonner (23-1) off balance enough to prevent a massive inning. The Tigers also entered feeling they had nothing to lose as significant underdogs.

But attrition, and a few Fleetwood errors, eventually piled up.

“I looked at their lineup before the game and not a single person was hitting under .300,” Knoll said. “So I think we held them pretty good.”

Bonner pushed across three runs in the second. Fisher drove in two, then McGonigle, the Auburn commit, lofted a sac fly to deep center.

Fleetwood’s Liam Hilburt threw away a grounder with no one out in the fourth, and Bonner punished them. The error allowed CJ Nocella, who had singled and was running with the pitch, to score from first. Joey DeMucci doubled to put another runner in scoring position, then Austin Cannon stroked a double to deep right to chase home two. Cannon scored on James Sousa’s RBI single to center.

Sousa, in the six hole, led the way with three hits. Nine-man Nocella had two hits. Cannon scored two runs and drove in two as the five-hitter. Fisher reached on a dropped fly ball in right in the fifth and scored on DeMucci’s RBI single for a fifth unearned run on the day.

All that was plenty of help for Harry Carr, who chewed through five innings on the mound. He allowed three hits and one walk, striking out seven.

The only blemish came in the top of the fifth when Hilburt led off with a double down the left-field line, the only non-infield hit of the Tigers’ four safeties. He ended up scoring on a pair of wild pitches.

“Harry had a great performance today on the mound,” Cannon said. “He did his job, threw strikes, got the job done.”

Michael Anderson and Kehoe tossed a scoreless inning of relief each, keeping Bonner’s stable of arms fresh. Each struck out two.

Bonner’s season began with a pair of goals. The first was achieved via the PCL title. The second, rectifying last year’s loss in the PIAA semifinals after leading in the bottom of the seventh, is on the horizon.

As a first step to getting back there or beyond, Monday’s felt suitably routine.

“It’s up there with the PCL championship,” Fisher said. “We had a goal at the beginning of the season, we wanted a PCL plaque and state championship trophy. That’s what we’re chasing now, and that’s what we want to win.”