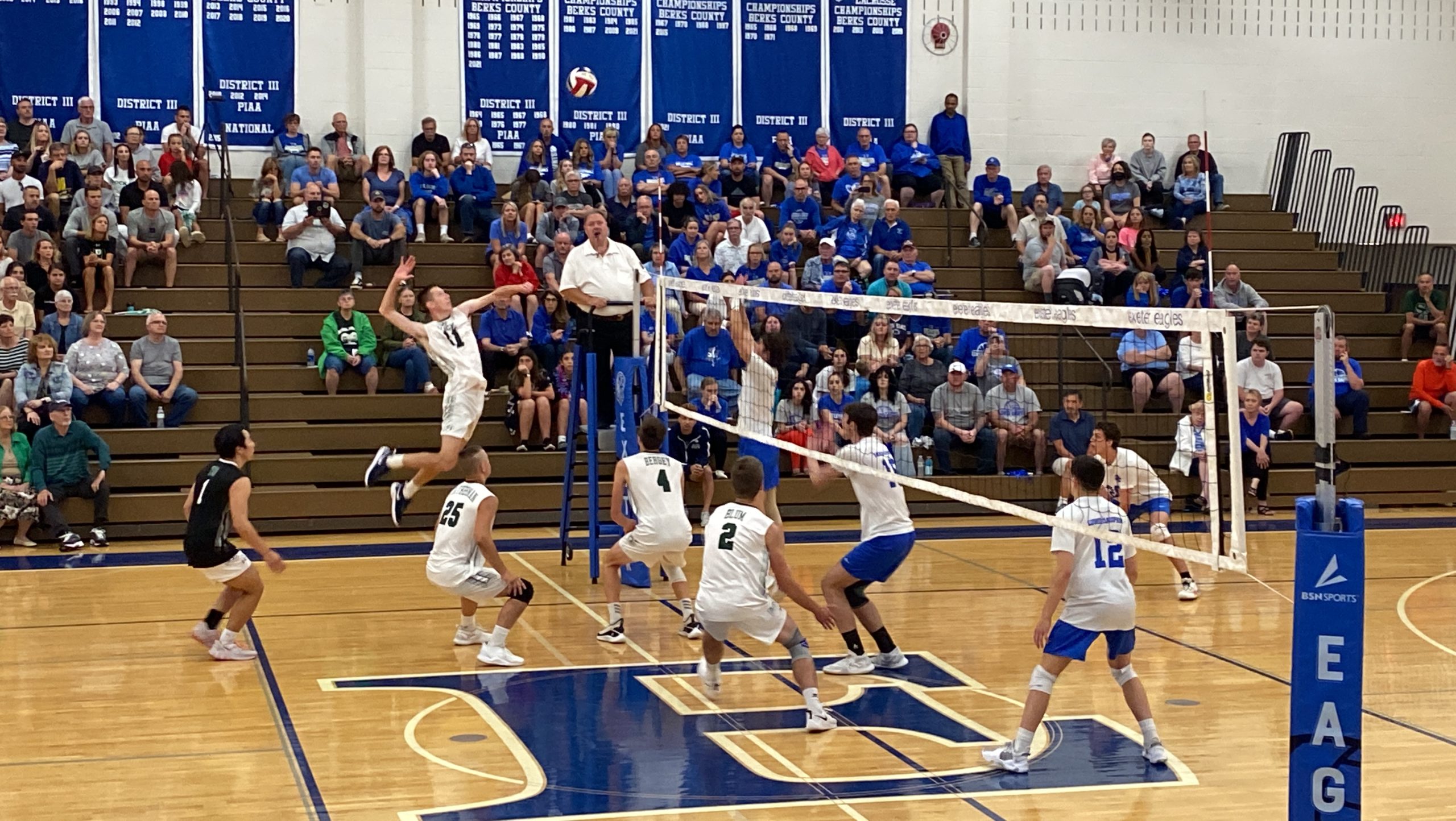 Dock Mennonite's Sean Gillespie (11) goes up to hit the ball against Lower Dauphin during their PIAA-2A semifinal on Tuesday, June 7, 2022. (Mike Cabrey/MediaNews Group)

EXETER >> With the Dock Mennonite and Lower Dauphin boys volleyball teams going toe-to-toe as the third set extended beyond 25 points, Pioneers junior setter Lane Bergey could not help but appreciate the level of competition on the court.

“I just realized how fun it was,” he said. “It was awesome. It was what I dreamed of cause I’ve been dreaming of this for a long time. But at that point you just need to focus in cause every point matters and that’s a big part of the game.”

Dock gave the defending state champions all it could handle in Tuesday night’s PIAA Class 2A semifinal. But with the match even at a set piece, the Pioneers had four chances to take the third and could not put the Falcons away.

Instead, Luke Gibbs hit a ball off a block to tie things at 29 then served consecutive aces to give Lower Dauphin a 31-29 win.

“Seriously, that was the best volleyball I’ve ever been a part of and we just had a couple balls where we could of won,” Bergey said. “But it was just so close.”

“We weren’t supposed to win but feeling the chance that we can win and then not being able to finish is hard to swallow,” Pioneers coach Kirby King said. “But I’m proud of our guys.”

“We came into this game knowing we had nothing to lose so we kind of just played our hearts out,” Gillespie said. “They weren’t quite ready for what we had.”

The Pioneers jumped out to a 13-7 lead in the opening set then held off an LD charge to earn a 1-0 advantage. In the second set, Lower Dauphin went ahead with an early run then kept Dock at bay. Dock rallied late in the third to lead 24-22 but the Falcons stayed alive and outlasted the Pioneers. Then in the fourth, Lower Dauphin grabbed control for good with a 13-2 run.

“They stepped up,” Gillespie said. “I feel like we needed to step up a little bit more but honestly this was one of our best games of the season. I feel like we really did play strong. They’re a good team, one of the best teams we’ve faced.”

“We actually were not serving well but we did catch them by surprise,” said King of the Pioneers’ first-set win. “They were a bit off and they changed their rotation, they moved stuff around to try to counter and match up with us and they did affect our one outside but they didn’t affect the other.

“Sean stepped up the rest of the match, but they did change Anthony’s looks so Anthony then all of a sudden had the two biggest blockers and Sean didn’t.”

Lower Dauphin advances to face District 10 champ Meadville – a 3-0 winner over District 10 runner-up Cochranton – in the state final Saturday at Penn State in a rematch of last season’s title match the Falcons won in four.

“We had great seniors this year and they were always supporting us out on the court and then we have a lot of juniors coming back next year,” Bergey said. “So it’s exciting to get the experience for next year and I’m hoping to come back, win it – I want to go all the way.”

Up 6-5 in the first set, Dock won seven of the next nine points – including a run of three straight aces from Derstein – to lead 13-7 and force a Lower Dauphin timeout.

The Falcons responded by taking the next three points, the start of a 10-3 run that twice gave them one-point leads, the second time at 17-16. Dock, however, claimed the next two points and never trailed from there. Tied at 22, the Pioneers took the set’s final three points – a Gillespie ace giving the District 1/2/11 regional champ the 25-22 win.

Dock cut the margin down to two three times late in the set, the final time when a Gillespie kill made it 24-22 but a Craig Patrick kill on the next point sealed a 25-22 Lower Dauphin win, knotting the match at a set apiece.

“That one, it’s just volleyball,” Bergey said. “Whoever’s hot, they get a serving run – it’s hard to come out sometimes.”

The largest lead for either side in the third set was three. A Bergey ace had Dock up 14-11 before Lower Dauphin used an 8-4 run to pull ahead 19-16. The Falcons still led by three at 21-18 but the Pioneers proceeded to take the next five points for a 23-21 edge after a Gillespie kill.

“I know the last few games I was having a little bit of a trouble hitting sometimes,” Gillespie said. “But I feel like this, knowing that this could be my last game I just wanted to put it out all on the court. Just let it rip.”

A Blum kill gave Dock set point at 24-22 only for a Derick Colon kill then a William Sierer block to pull Lower Dauphin even at 24.

A kill by Gillespie gave the Pioneers another set point at 25-24 but Colon hit a ball off a block and out to knot things up once more.

“Their smallest hitter, really in my opinion, was the MVP,” said King of Colon. “He was a game-changer, cause our whole strategy was to stop 20 [Gibbs] and then he was just ripping us and we had one-on-one blocking and he was just chewing on it – line, cross, whatever was available he was just spanking it. I told him in the handshake, ‘MVP’.”

Dock survived three Lower Dauphin set points to earn a fourth chance to win at 29-28 after a Blum kill. But Gibbs knocked a shot off a block to tie it at 29 with the senior then collecting consecutive aces – the first down the sideline – for a 31-29 LD win.

“A key point in that match was their big jumper ripped that line in,” King said. “It was right on the line. Our jumper just before that ripped it just out that much so it’s like this game right here was where their senior put it in and our junior put it out. But that’s not the story of the game.”

The Pioneers cut the margin twice to two but a five-point burst by Lower Dauphin extended its lead to 18-11. Dock won the next three points to get within 18-14 on a Gillespie kill but could not pull any closer.