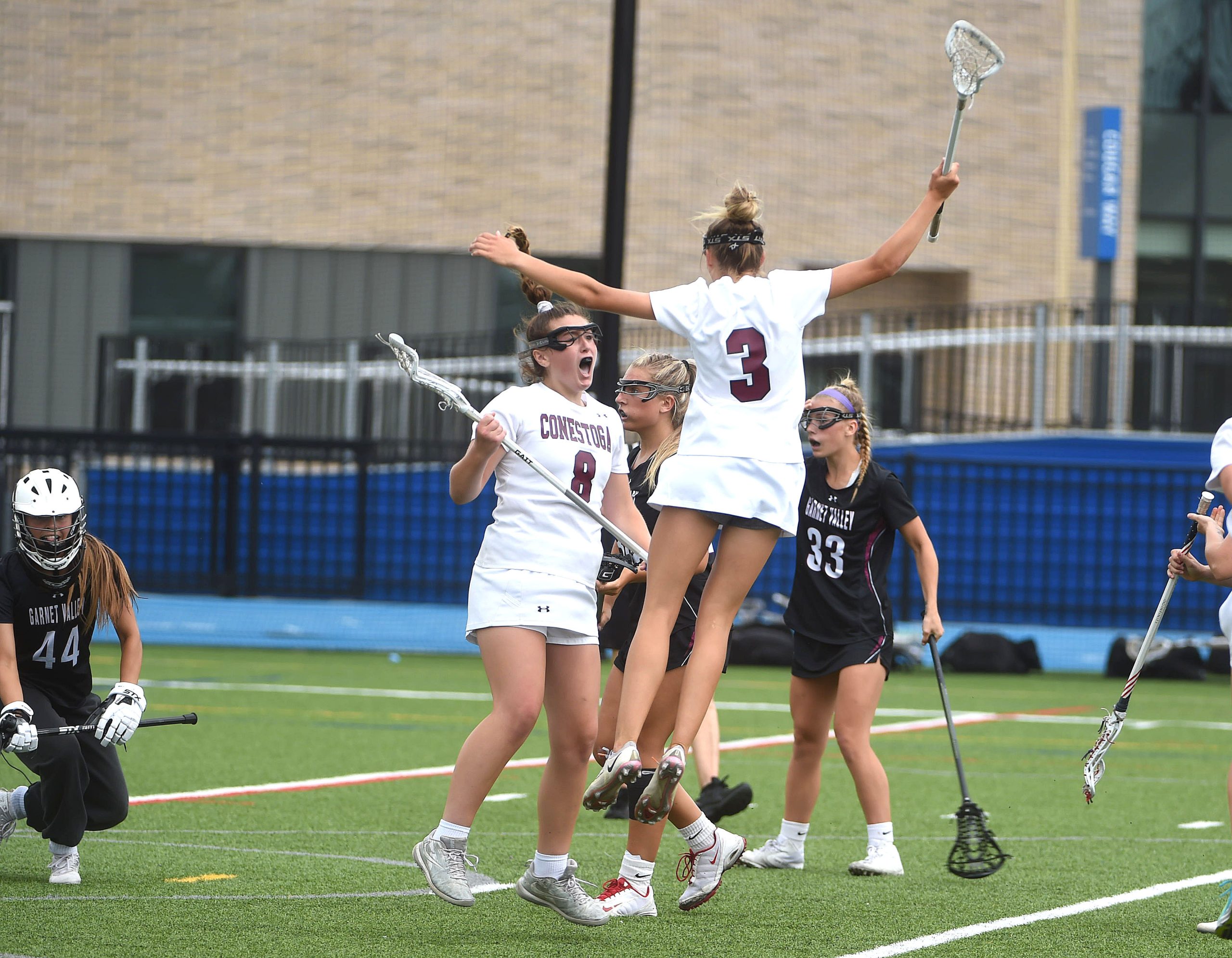 SPRINGFIELD — It was a situation Chole Brown never dared to dream about; game tied, time running down and the ball on her stick with a chance to win an important game.

That was the position the sophomore found herself in at the end of Tuesday’s PIAA Class 3A semifinal game between Conestoga and Garnet Valley at Springfield High. It was one she could handle.

Brown fired from about 15 feet out to beat Garnet Valley goalie Mak Butler to score with 3.3 seconds left as the Pioneers edged the Jaguars, 8-7.

The win puts Conestoga (23-1) into its first state final since winning the title in 2016. The Pioneers will face District 3 champ Manheim Township, which lost to Harriton in 2019. The game will be Saturday at West Chester East at noon.

“It came all the way up top and I was able to score a lucky goal,” Brown said. “I never scored the game-winning goal before.

“It’s all just so amazing. I was on varsity last season, but not as a starter. We made it to the semifinals then, but we lost on this field to Radnor. We’re all working together to be successful. That’s why getting to the championship is so special for our seniors, who were going back for graduation (Tuesday) night. We knew how special this would be for them.”

The luck factor may be debated, but what is not in dispute is the goal sent the bench and the ‘Stoga fans into elation.

“We’ve been working hard all season,” Brown said. “Our coach (Amy Orcutt) says that every accountability sprint, every sprint we did led up to this game and we just fought really hard and believed in each other.”

The two Central Division foes were locked in a 5-5 tie at halftime, and the defensive struggle continued into the second half. The half went nearly nine minutes before someone dented the net.

The Jaguars soon took advantage of being two players up. Kaitlyn Stankavage scored off a free position to knot the score at 6-6. Another long stretch favoring the defenses ensued until, with three minutes left, Ava Kane whistled an 8-meter shot past Conestoga goalie Alanna Lepore for a 7-6 lead.

That lasted for all of 40 seconds until Ellie Wisch tied the score with 2:21 left.

The winning goal, however, did not escape controversy. Conestoga was holding for the last shot when there was a question whether a whistle blew to signal a re-start after a foul, which would have resulted in a false start and a turnover for Conestoga.

After a conference, the referees decided there was no false start, and awarded the ball to the Pioneers to set up the frantic final seconds.

“I must have misunderstood one of their signals,” Garnet Valley coach Jenny Dooley said. “I know Conestoga played a good game and has a good defense. I’m so proud of the team I coached. This is one of the best games any team I’ve had has shown (in terms of) the fight they gave and how they came back when they were down.”

One overlooked aspect of the contest is the job Garnet Valley did on Conestoga star Kate Galica. They held her to no goals and one assist. Galica found other ways to contribute as she created four defensive turnovers. But, the depth of Conestoga stood out.

“I’m proud of what we did as a team. We had a game plan today and we followed it,” Dooley said. “One of our main points was limit Kate Galica and I don’t know if that has happened all season.”