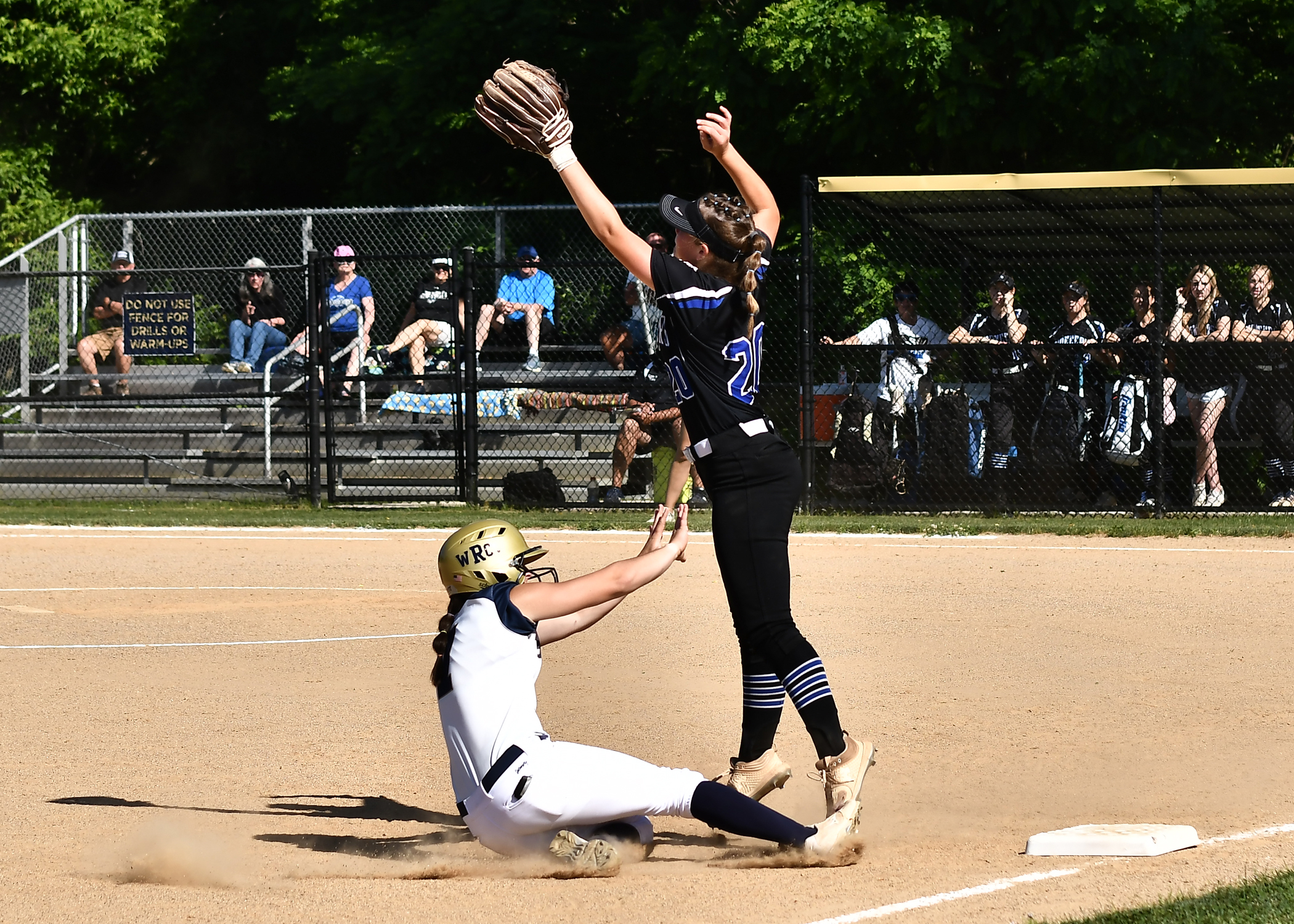 WESTTOWN — An eight-run outburst in the second inning catapulted Lampeter-Strasburg (18-5) to an early lead and an eventual 12-7 victory over West Chester Rustin (21-3) in Monday’s opening round game of the PIAA Class 5A softball tournament at Rustin High School. The Pioneers will move on to Thursday’s quarterfinal round, while the Golden Knights’ season comes to a close.

The game got off to a great start for Rustin. After starter Emily Gillis struck out the side in the top half of the first, Rustin plated a pair of runs in the bottom half.

Gina Del Giorno (2-4, 2R) led off, and after fouling off a half dozen pitches, worked a base on balls.  Kelly Fricker came up next, and beat out an infield single. Del Giorno came around to score when Aly Black stroked a single up the middle, then Paige Bentley brought Fricker home with a two-out double to give the Knights a 2-0 lead at the end of one.

Suddenly, the L-S bats came alive.The Pioneers batted around in the inning, scoring eight runs on six hits in the frame, including a double from Ally Raub (2-5, 2B, 2R, RBI) and a pair of home runs from Brooke Zuber (3-4, 3 HR, 4 RBI).

Rustin clawed back in it with three runs of their own in the second. Gillis led off with a single, and then Del Giorno made it first and second with a one-out single. Fricker then cleared the bases with a triple to the gap in right center, coming into score on a double from Mairead Hopkins to make cut the lead to 8-5.

L-S tacked on four insurance runs in the sixth behind a double from Julia Gerard, and back-to-back home runs from Keiva Middleton and Zuber’s third of the afternoon.

The Golden Knights didn’t pack it in, and notched another pair of runs in the seventh doubles from Fricker and a two-run homer from Hopkins. Taylor Kuhn followed Hopkins with a double, but that would be as close as they got.

The defeat doesn’t put a damper on the excellent season the Golden Knights put together. Along with their second straight Ches-Mont American crown, Rustin captured the first district championship in program history.

“I told the girls that the district championship will bond us together forever,” said Becker. “I’ve coached a lot of teams, and this one is truly special. And for the girls coming back, just the experience of playing at the level we did this year is invaluable.”

Del Giorno, who will be moving on to continue her academic and softball careers at Division1 Mount Saint Mary’s, will have nothing but fond memories of the season and the team.

“These last four years playing with this team have been the best four years of my life,” said Del Giorno. “I’ve gotten to play with my best friends who I’ve been playing with my whole life.  It’s incredible how great this year was—we’ve never gone this far before at Rustin.This is a bond that will keep us together the rest of my life.”