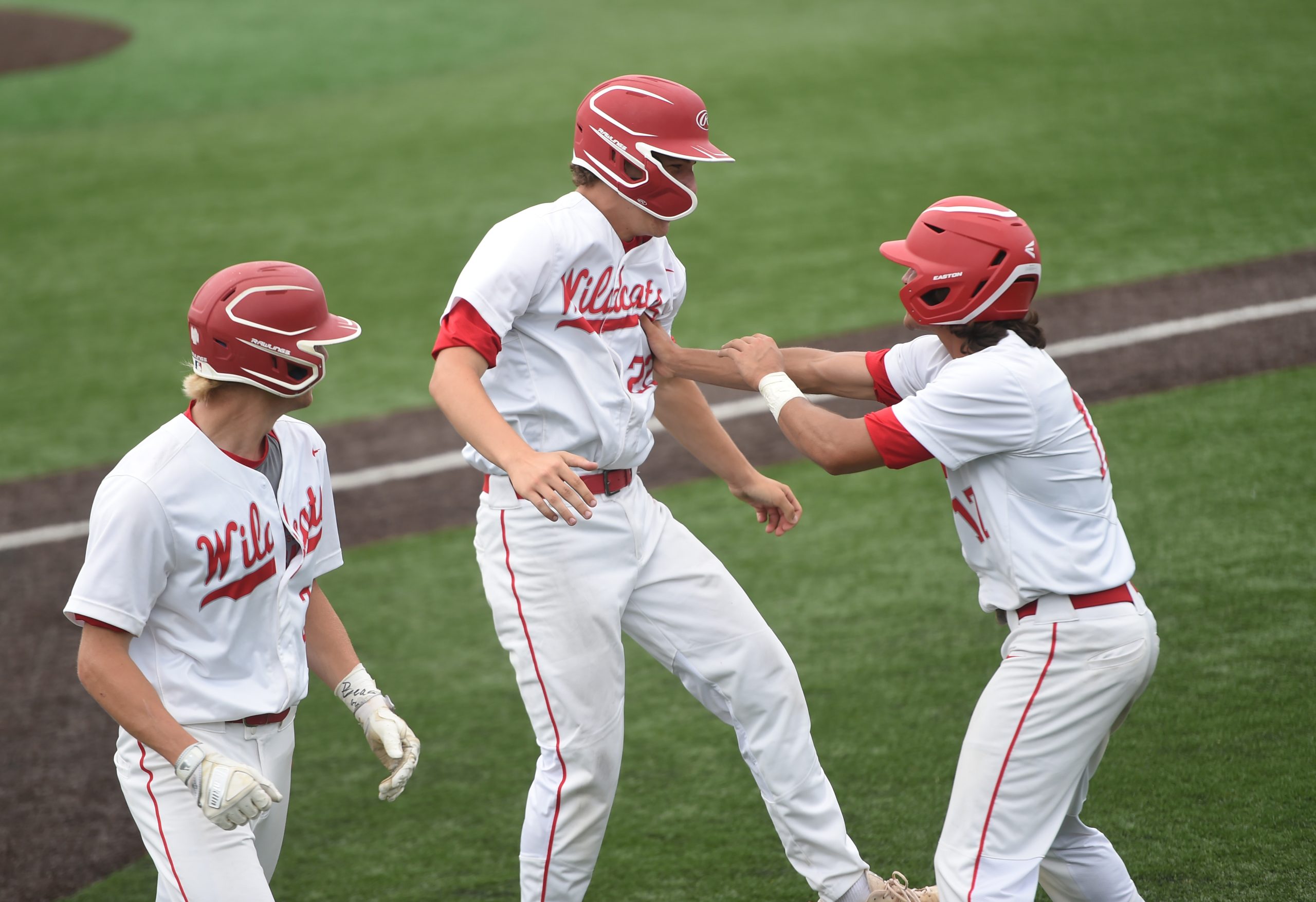 Owen J. Roberts’ Zach Brockner, center, and Ethan Sabatino, right, celebrate after coming in to score on a double by Tristan Dietrich in the seventh inning of Thursday’s District 1-6A baseball championship at Villanova Ballpark. (Owen McCue - MediaNews Group)

PLYMOUTH MEETING >> When Owen J Roberts, trailing top seed West Chester Henderson 3-1 and down to its last three outs in Thursday’s PIAA District 1 6A baseball championship final, came up with a six-run rally, it didn’t surprise the Wildcats.

“We’ve been doing this all season,” said Owen J Roberts junior Tristan Dietrich, whose two-out, three-run double was the biggest blow in the six-run uprising. “We’ve had games where we’ve come back from five runs down, and I just knew we were going to win all the way. I have all the confidence in our team. You can never count us out.”

OJR’s leadoff hitter in the seventh was senior right fielder Zach Santise, the No. 8 hitter. On a 3-1 count, he was hit by a pitch to start the rally.

“I was supposed to take the first strike, I took one and then the pitcher couldn’t locate and I took one on the arm,” said Santise. “[Our last-inning rally] didn’t surprise me at all. At the beginning of the playoffs, we were down by five runs and scored nine runs, so we know how to chase.”

Next up was OJR junior catcher Jake Ambrosio, who was hit on the third pitch. Then, Wildcat senior leftfielder Kyle O’Connor, on the first pitch, laid down a beautiful bunt down the third base line for a hit to load the bases.

“I just knew I had to get that bunt down the line,” said O’Connor. “Coach [Greg] Gilbert always talks about bunting in practice and we all work with the machine every day, and I work on getting it down the line every time and getting a perfect bunt. And it worked out that the pitcher missed it and it was a base hit.”

O’Connor was not surprised at his team’s final rally, remembering one week ago, in the second round of Districts, when Owen J Roberts trailed Central Bucks South 6-1 in the bottom of the fifth inning and exploded for nine runs in a 12-8 win.

“This rally didn’t surprise me – we had that rally against CB South, then against Garnet Valley we came up big in the late innings,” said O’Connor. “It’s been like this all season – we did it against Phoenixville [in the regular season]. For us, it’s a different hero every day.” Ethan Sabatino celebrates at first base after driving in the tying run in the seventh inning of Thursday’s District 1-6A baseball championship at Villanova Ballpark. (Owen McCue – MediaNews Group)

With the bases loaded, no outs, and Owen J Roberts still trailing 3-1, Wildcat senior center fielder Aaron Kirby stepped to the plate. He fell behind 0-2 but then lined an opposite-field single to left field to make the score 3-2.

“I was trying to put the ball in play, get the runners moving, and I knew if I put the ball in the outfield a run would score,” said Kirby. “My goal was to put a ball out there. It was a fastball away, and I tried to hit it the other way.

“To beat us, you’ve got to play the full seven innings – we don’t give up, we don’t give up easily. We’ve had a lot of comeback wins and this is just another one of them. We’re a tough team to beat.”

After a Wildcat strikeout, OJR senior second baseman Ethan Sabatino lined a single past shortstop to tie the score at 3-3.

“I saw a fastball down the middle, I wasn’t trying to do too much, we were only down by a run,” said Sabatino. “I wanted to just get a hit and keep our team going. … We’ve been doing this all year, you can never count us out.” With two outs, the bases loaded and the score tied 3-3, OJR junior Zach Brockner came to the plate. He had cracked out hits in his previous two plate appearances, and worked a 3-2 count before drawing a walk that gave the Wildcats their first lead of the game, 4-3.

“I was just looking to get on base,” said Brockner. “I already had two hits in the game, and I was feeling confident up there. With two strikes, you’ve really got to tighten up and make sure you don’t strike out. I saw the [3-2] pitch, and it was outside – it was a fastball 2 or 3 inches outside, it barely missed [the strike zone] but it was definitely a ball. … We’ve done this 3 or 4 times now, where we’ve had a rally in the last inning, we’ve been in big games, and we know how to win.”

Dietrich then came to the plate and on the first pitch blasted a double to left center that plated three very important (as it turned out) insurance runs.

“Really, I was just trying to keep the line moving and he gave me a pitch to hit,” said Dietrich. “I was expecting a fastball away and I got one, so I was ready for it.”