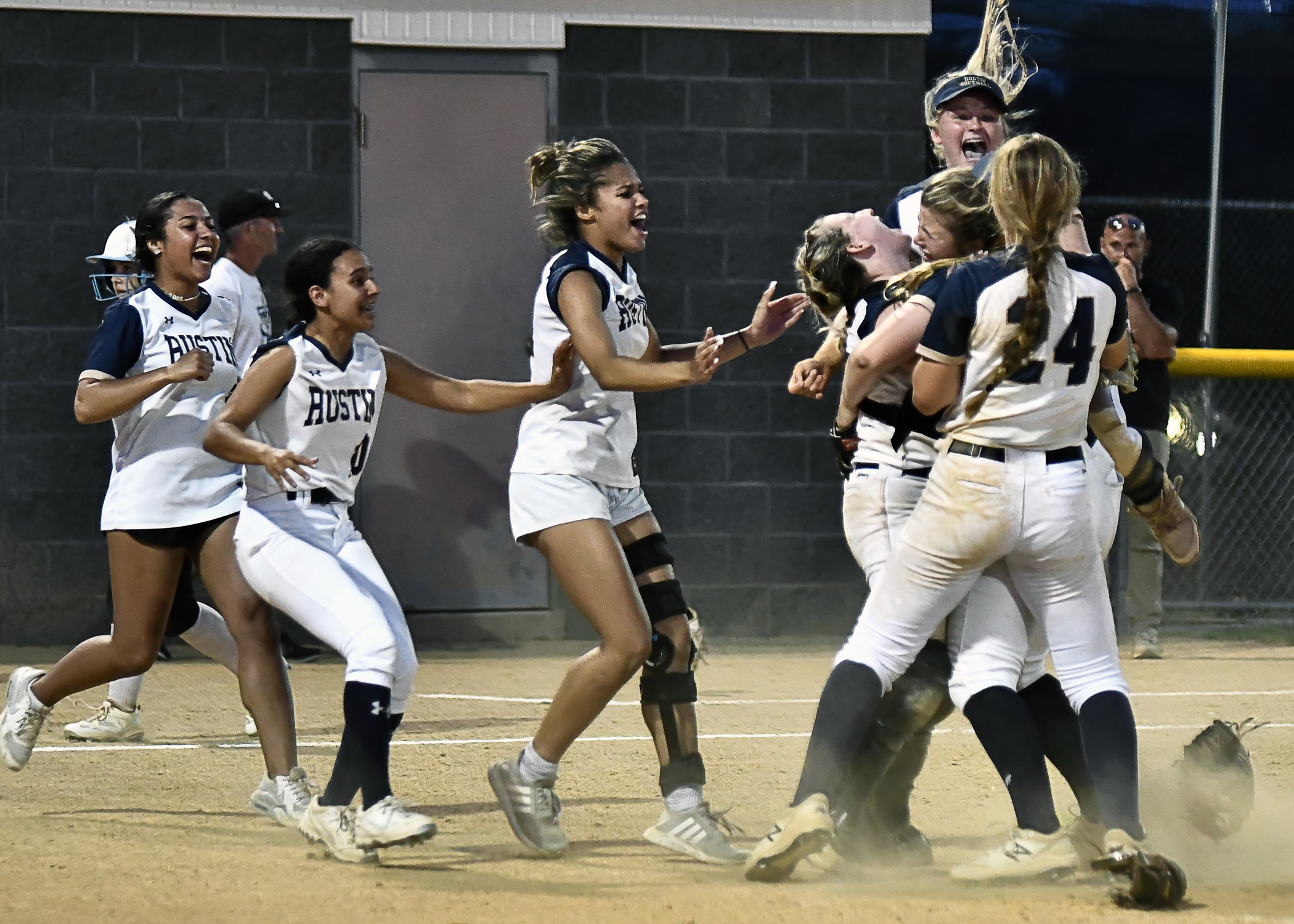 ROYERSFORD—Headed into the top half of the seventh, Rustin pitcher Emily Gillis hadn’t struck out a single Oxford hitter. But after Oxford loaded the bases in the seventh and pulled within a run of the Golden Knights, Gillis dug deep, found that little extra, and whiffed three of the next four hitters, leaving Oxford (14-9) to strand the bases loaded and come up a run shy.

With the 7-6 win, Rustin (22-2) takes the District 1, Class 5A championship, believed to be the first District 1 crown for the Golden Knights in any sport since 2008 when the football team won.

The Golden Knights move on to the state tournament next week, starting Monday, where they will face the fifth place finisher from District 3, at a site and time to be determined.

“My hat goes off to Oxford; they’ve been a different team the second half of the season,” said Rustin Coach Dennis Becker. “They pushed us hard to the end—our bats went quiet and Oxford just chipped away. But I never had a doubt that these girls would find a way to win. I couldn’t be happier for them—they’ve worked really hard to get here.”

Rustin looked like they might win in a blow out, jumping out to 7-0 lead after just two innings. The Knights batted around in the first, getting RBI singles from Paige Bentley, Laney Lacey and Gillis.

The Knights added three more in the second, highlighted by a double from Mairead Hopkins and Bentley’s second RBI of the game.

“Even up 7-0, we knew we couldn’t just sit back and relax,” said Rustin senior Gina DelGiorno (1-4, R). “We knew we had to keep our energy up because Oxford was going to keep coming. It’s just an amazing feeling. This season has been amazing. We’ve all worked so hard and it just feels great to be a winner.”

Slowly, but surely, Oxford did just keep coming, chipping away little by little. The Hornets put up two in the third on a double from Hannah Aker (3-3, 2B, 2R) and singles from Natalia Donofrio (2-4, R) and Ashley Flynn (3-4, R, RBI). Emily Basilio singled and scored on an error in the fourth, and Aker singled and scored on a hit from Mackenna Frank in the fifth to cut the Rustin lead to 7-4.

“There is no quit in this team,” said Hornets’ coach Josh Socash. “I couldn’t be more proud of the effort. We were just a couple timely hits, a couple more balls in play from a different outcome.”

Oxford’s Grace Allen is just nipped at first base, as Ali Black takes the throw (BILL RUDICK for MediaNews Group)

The Hornets outhit Rustin in the game, 15-10, and held the Knights hitless after those two big innings to start the game. There was a clear shift in momentum, and the Hornets made a real push in the seventh. Flynn and Frank led off with back to back singles, with Flynn scoring on a single from Molly Friel. After Emily Basilio reached on an infield single, Oxford had the bases loaded with nobody out, and trailed by just two.

“Once I saw catcher Laney Lacey go out and talk to Emily (Gillis), I knew we’d be all right,” said Becker. “Those two have such a great relationship as pitcher and catcher—Laney always knows just what to say to Emily. Once I saw Emily laugh, I knew she’d find a way to get it done.”

Though Angela Beadle managed to pull the Hornets within a run with a two-out single, Gillis reared back and got that final strikeout.

“I knew I just had to keep pushing through and make one pitch at a time,” said Gillis. “I knew that no matter what happened, my team would have my back and we’d push through. This is just the best feeling in the world.”

The Hornets, as the runner-up, also move on to the state tournament, where they will have a first round match-up against the District 12 champ, site and time to be determined.

“We are definitely not done,” said Socash. “We have really stepped it up and hit our stride in the post season. We are now going to focus on making a run at states, and maybe get another shot at Rustin in the state bracket in semis. Again, I just couldn’t be more proud of this team.”